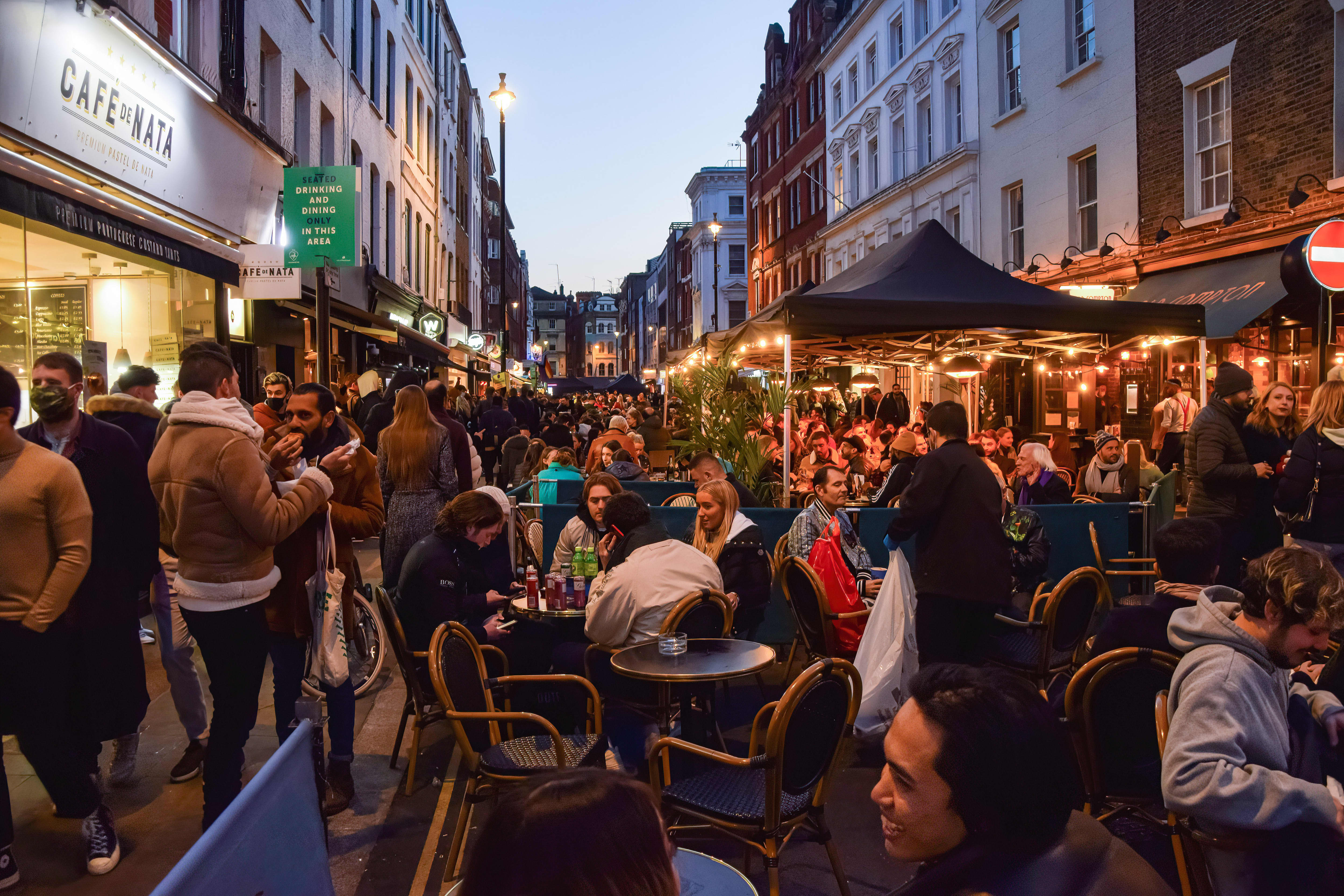 Busy bars and restaurants in Old Compton Street, Soho, in London in April 2021.SOPA Images | LightRocket | Getty ImagesThe U.K. relaxed restrictions on its economy and social contact further on Monday, but the spread of the Covid variant that first emerged in India is threatening a full lifting of measures.From Monday, pubs, bars and restaurants are allowed to serve customers inside; museums, cinemas and theaters can reopen; and exercise classes and indoor sports can resume. In addition, up to six people or two households can now socialize indoors and gatherings of up to 30 people are allowed outside.International travel can also resume on Monday with people allowed to go on foreign holidays. Countries have been put on a “green,” “amber” or “red” list — with varying quarantining rules on return to the U.K. — determined by their infection rate.While the reopening is a sigh of relief for the hospitality, leisure and travel industry, the lifting of restrictions is being tempered by a rise in Covid cases that has been attributed to a variant of the coronavirus that first emerged in India.U.K. Prime Minister Boris Johnson has called for a cautious approach to the reopening, warning that the spread of the new variant could threaten further easing on June 21, when it was hoped all restrictions on social contact would be lifted.Speaking Friday, Johnson said there was currently no evidence that the variant would evade Covid vaccines that are being deployed across the country, but that the new variant “could pose a serious disruption to our progress … And I must stress that we will do whatever it takes to keep the public safe.”He said the variant looked to be more transmissible than other strains, but cautioned that it wasn’t clear by how much. England’s Chief Medical Officer Chris Whitty, speaking alongside Johnson, added that there was “confidence” the strain is “more transmissible” than other variants already circulating in the country.Rise in casesThe new variant is also believed to be more transmissible than a variant that first emerged in the U.K. last fall. This became the dominant strain in the country, along with in the U.S. and parts of Europe.On Sunday, Britain reported just over 1,900 new cases, bringing the total number of recorded infections in the U.K. to 4,450,777. As of Sunday, 15,918 cases had been reported in the previous seven days, up 8.6% from the May 3-9 period, according to government data.This rise in cases has prompted a change in vaccination strategy from the government, with the over-50s and clinically vulnerable set to receive their second doses eight weeks after the first dose, rather than at 12 weeks as per the previous immunization strategy.On Friday, it was announced that the U.K. would deliver surge vaccinations and testing in areas where the new Covid variant first detected in India is spreading.To date, almost 70% of the British adult population has received a first dose of a coronavirus vaccine, while just over 38% have received two doses. This U.K. on Sunday hit the milestone of having given 20 million people their second dose of a Covid shot.The U.K.’s Health Secretary Matt Hancock said the government will make a decision on June 14 whether to go ahead with the final lifting of restrictions a week later. Speaking to Sky News on Sunday, Hancock said variants were one “of the biggest risks to this opening.””Because of the speed of transmission of this one, it can really spread like wildfire amongst the unvaccinated groups — hence we need to get as many people vaccinated as possible, particularly among those who are most vulnerable to ending up in hospital.”- CNBC’s Matt Clinch contributed reporting to this story.

CDC director defends telling fully vaccinated they can go without masks amid confusion in states, cities
All eyes on Walmart+: Investors want to know if service is creating more loyal customers
To Top
error: Content is protected !!