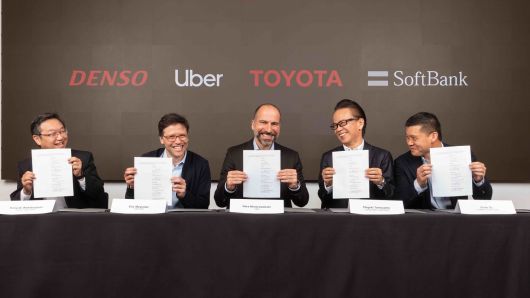 Uber has closed a deal for a $1 billion investment in its self-driving vehicle unit, just weeks before its initial public offering.

The investment values the division, known as the Advanced Technologies Group (ATG), at $7.25 billion and creates a newly formed corporate entity with its own board. Representatives from the investors attended the signing ceremony at Uber’s San Francisco headquarters Thursday morning alongside Uber CEO Dara Khosrowshahi and ATG leader Eric Meyhofer.

Uber officially kicked off its IPO process last week with the public filing of its prospectus. The next stage is a road show at the end of April, where Uber’s executives and bankers will sell the ridesharing startup’s story and business model to potential public market investors.

Smaller ridesharing rival Lyft went public at the end of March and has struggled in public markets as investors question its heavy losses and path to profitability.

Uber, while far more global and diversified than Lyft, burned through about twice the amount of cash last year. It, like Lyft, is expected to price its IPO at a premium to its last private market valuation.

The new investment gives Uber fresh capital to develop technology for self-driving cars and trucks, that it will argue to investors is critical for its long term business model.

Toyota is also committing to contribute up to an additional $300 million over the next three years to help cover costs in the newly formed unit.

This stock needs to find out its calling
Big banks kicked off earnings season with a bang
To Top
error: Content is protected !!