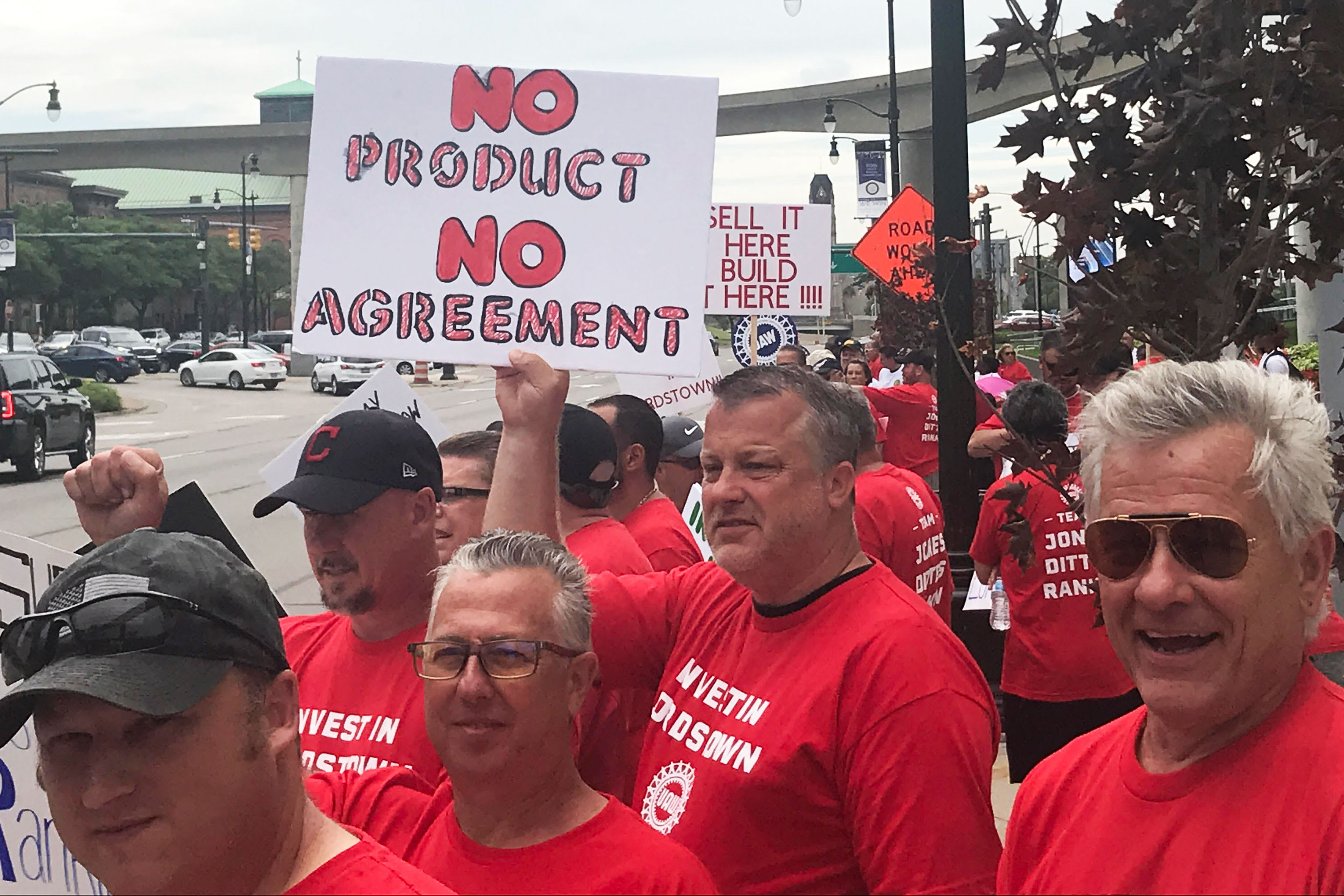 UAW members and supporters from General Motors’ Lordstown Assembly plant, which was idled in March, picket outside GM’s headquarters, as 2019 contract negotiations get underway.Michael Wayland | CNBCDETROIT – The United Auto Workers union plans to strike against General Motors following the two sides not reaching a tentative deal before a Saturday night deadline.The strike, depending on its length, could easily cost GM hundreds of millions of dollars. The last time the union declared a strike at GM was in 2007. The two-day work stoppage was estimated to have cost the Detroit automaker more than $300 million a day.The called strike comes despite GM saying it presented a “strong offer” to the union that included the addition or retention of thousands of jobs and more than $7 billion in new investments over the next four years.UAW Vice President Terry Dittes, who oversees the union’s GM unit, made the strike announcment during a press conference Sunday morning in Detroit. The strike will take effect at 11:59 p.m. with roughly 48,000 workers heading to the picket lines.”Today, we stand strong and say with one voice, we are standing up for our members and for the fundamental rights of working class people in this nation,” Dittes said.The union, he said, did not make this decision lightly. He called the strike the union’s “last resort.” Dittes, who did not take questions after the remarks, did not provide exact details about what outstanding issues remain with GM.’Strong offer’GM, in a statement, said the company “presented a strong offer that improves wages, benefits and grows U.S. jobs in substantive ways and it is disappointing that the UAW leadership has chosen to strike at midnight tonight.””We have negotiated in good faith and with a sense of urgency,” GM said in an emailed statement. “Our goal remains to build a strong future for our employees and our business.”The company also said the four-year deal included “solutions” for assembly plants in Michigan and Ohio that were potentially slated for closure as well as wage and lump-sum increases in each year of the deal.The company declined to provide further details about the deal. The union did not immediately respond for comment in response to GM’s remarks.A person familiar with the proposed deal told CNBC that the “solutions” for the plants included production of a new all-electric pickup at the Detroit-Hamtramck plant in Michigan and battery cell manufacturing for workers in Ohio in addition to an announced deal to sell Lordstown Assembly to an affiliate with all-electric vehicle company Workhorse.A sticking point in the discussions, according to the person who agreed to speak on the condition of anonymity, is the use of temporary workers.Temporary workers receive fewer benefits and lower wages, despite paying union dues and becoming members of bargaining units for the UAW after 90 days.While percentages of temporary workers fluctuate based on the time of year, temp workers represent about 6% to 7% of the hourly union workers at the Detroit automakers. That compares with roughly 20% or more at the foreign automakers in the U.S.Unanimous decisionBrian Rothenberg, a spokesman for the UAW, said the union does not believe a deal will be reached to avoid a strike . He said upward of 200 or so local union leaders unanimously voted for the strike.The UAW did not clarify whether or not union officials plan to continue negotiating with GM ahead of the announced strike.UAW Vice President Terry Dittes announces the union will strike against General Motors during a press conference Sept. 15 in Detroit. The strike will take effect at 11:59 p.m.Dittes, in a letter to members Saturday night, said there remained “many outstanding issues” that negotiators still needed to reconcile, including “differences between the parties on wages, health care benefits, temporary employees, job security and profit sharing.” The listed issues were expected to be some of the most difficult in the negotiations.Since midnight, UAW members with GM have been working without a contract and those working Sunday had to cross picket lines of their fellow union brethren, as UAW janitorial workers at the facilities went on strike at midnight.The circumstances add to the tension of already unprecedented negotiations, following UAW Region 5 Director Vance Pearson, a member of the union’s International Executive Board, being arrested and charged by federal officials Thursday with embezzlement of union funds, among other charges.Ongoing federal probeThe affidavit detailing the charges also reportedly implicated UAW President Gary Jones and former UAW President Dennis Williams, whose homes were raided along with Pearson’s by FBI, IRS and Department of Labor agents two weeks ago. Pearson, who joined the UAW in 1981, succeeded Jones as director of UAW Region 5.Federal prosecutors say Pearson and other unnamed union officials conspired to embezzle hundreds of thousands of dollars in union money “for their own personal benefit along with other crimes.”The new charges and implication of Jones, as first reported Thursday night by The Detroit News, raise significant questions about the union’s credibility as it works to sign new labor contracts on behalf of 158,000 members.Neither Williams nor Jones, who did not attend the Sunday press conference, have been charged with any wrongdoing.Rothenberg declined to comment on the investigation, charges or implication of other union leaders.”This union exists to support our local unions and this strike is about our local union members,” he said. “We will not be deviated from that because that is what is in their interest, that is what they want and that is what we will do.”The UAW on Friday signed indefinite contract extensions with Fiat Chrysler and Ford Motor as it focuses on the negotiations with GM.Although the contracts between the UAW and companies are tailored to each automaker, the UAW traditionally uses “patterned bargaining,” which means the union negotiates a deal with the first company and then uses that contract framework to negotiate with the two other carmakers.

Jokowi, Prabowo and the topic of China