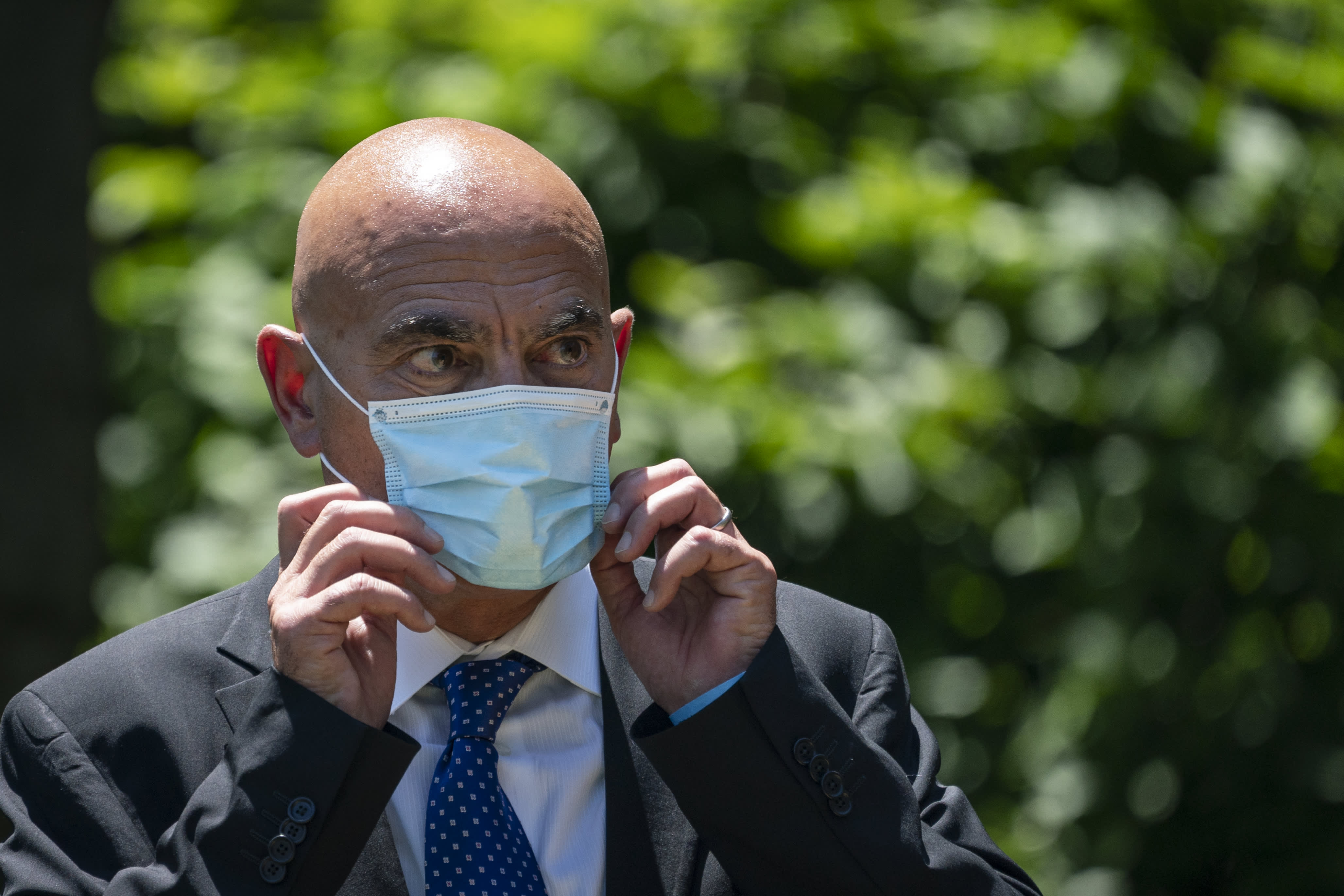 Moncef Slaoui, the former head of GlaxoSmithKlines vaccines division, listens as U.S. President Donald Trump delivers remarks about coronavirus vaccine development in the Rose Garden of the White House on May 15, 2020 in Washington, DC. Dubbed “Operation Warp Speed,” the Trump administration is announcing plans for an all-out effort to produce and distribute a coronavirus vaccine by the end of 2020.Drew Angerer | Getty ImagesTwo more companies are parting ways with Moncef Slaoui, the Trump administration’s former Covid vaccine chief, a day after he was fired from a company controlled by GlaxoSmithKline following sexual harassment allegations.Centessa Pharmaceuticals announced Thursday that the former head of Operation Warp Speed has stepped down as chief scientific officer, effective immediately. Vaccine developer Vaxcyte also said in an SEC filing posted to its website Thursday that Slaoui has agreed to step down from his position as chairman at the company’s request.Slaoui was fired Wednesday as chairman of Galvani Bioelectronics, a joint venture between GSK and Verily, after a woman sent GSK a letter saying he sexually harassed her several years ago while she was working there.GSK said a probe by an outside law firm “substantiated” her claims. Slaoui, 61, had spent 30 years at GSK, overseeing vaccine development at that pharmaceutical giant. He was chief scientist for the U.S government’s Covid vaccine development effort Operation Warp Speed under the former Trump administration.”The Centessa management team and board of directors were troubled to learn of yesterday’s news regarding Dr. Slaoui,” Centessa Pharmaceuticals CEO Dr. Saurabh Saha said in a statement.”Centessa is absolutely committed to fostering a culture of respect that is free from harassment and discrimination of any kind and are steadfastly committed to maintaining a work environment that is reflective of our strong values as a company.”Vaxcyte told CNBC in an email on Thursday that the company was made aware of the sexual harassment allegations on Wednesday and immediately requested Slaoui’s resignation from the company’s board.”Vaxcyte is committed to maintaining the highest standards of business conduct and ethics, including a safe and inclusive workplace,” the company said.GSK said on Wednesday that Slaoui’s dismissal came a month after the company received a letter “containing allegations of sexual harassment and inappropriate conduct towards an employee of GSK by Dr. Slaoui.”GSK said Slaoui’s actions “represent an abuse of his leadership position, violate company policies, and are contrary to the strong values that define GSK’s culture.Slaoui joined Massachusetts-based Centessa Pharmaceuticals in mid-February to advise its drug development programs, which focus on areas including hemophilia, cancer and kidney disease, Reuters reported. He had been a partner at Medicxi, the investment firm that founded Centessa, since 2017.That was the year Slaoui joined Vaxcyte’s board, where he became chairman in May 2018.Slaoui apologized Wednesday following the allegations, saying he was “deeply sorry.” He said he would take a leave of absence from roles at other health companies and a venture capital firm to focus on his family.”I would also like to apologise to my wife and family for the pain this is causing,” Slaoui said in a statement. “I will work hard to redeem myself with all those that this situation has impacted.”— CNBC’s Dan Mangan contributed to this report.