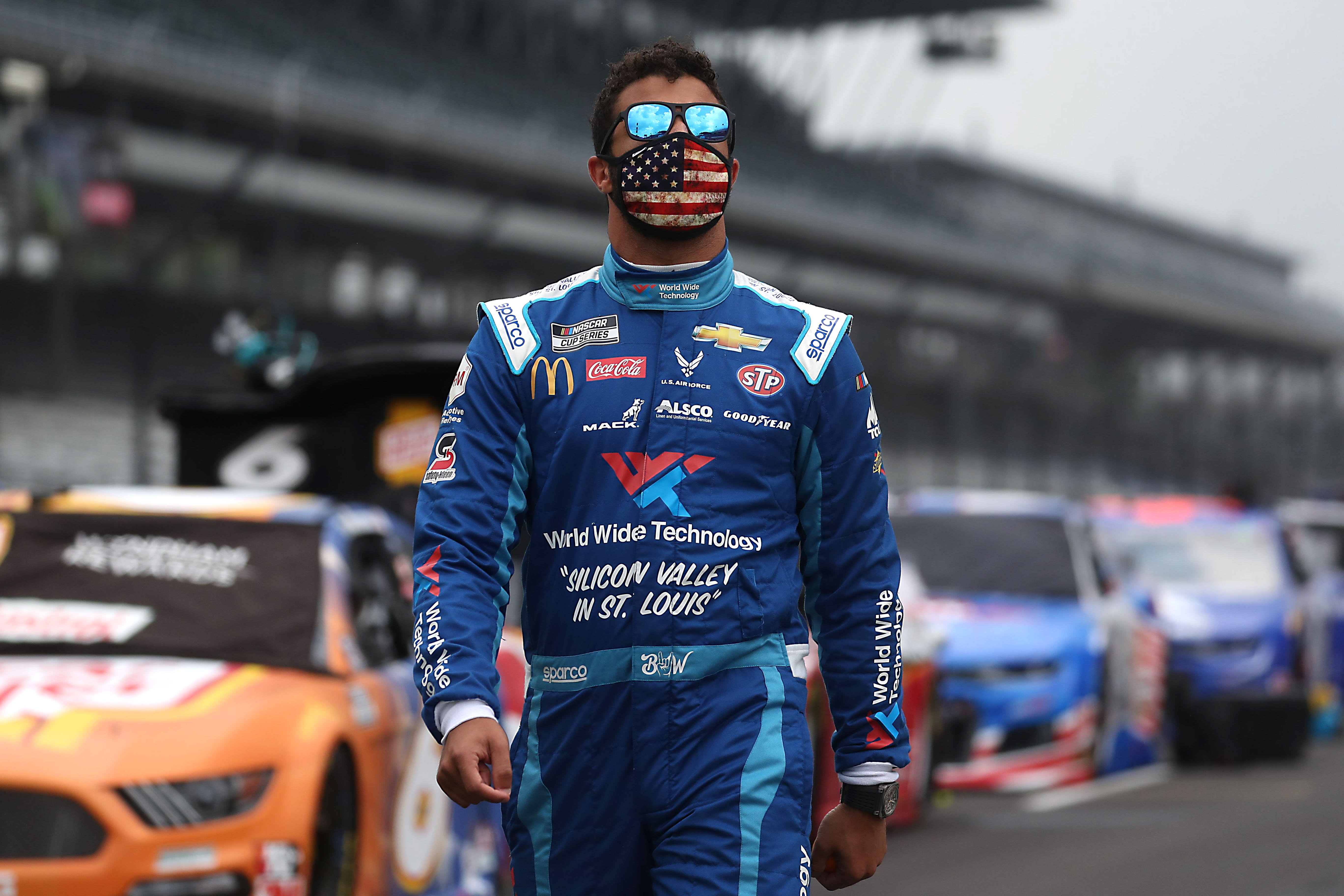 Bubba Wallace, driver of the #43 World Wide Technology Chevrolet, walks the grid prior to the NASCAR Cup Series Big Machine Hand Sanitizer 400 Powered by Big Machine Records at Indianapolis Motor Speedway on July 05, 2020 in Indianapolis, Indiana.Chris Graythen | Getty ImagesPresident Donald Trump lashed out Monday at the NASCAR Cup series’ only Black driver and ripped its ban on the Confederate battle flag.Trump asked in a tweet if 26-year-old Bubba Wallace has “apologized to all of those great NASCAR drivers & officials who came to his aid, stood by his side, & were willing to sacrifice everything for him, only to find out that the whole thing was just another HOAX?”Trump was referring to findings that what appeared to have been a noose found in Wallace’s garage recently was a pull rope and not meant to intimidate the driver. It was not ruled a hoax, as the president claims.”That & Flag decision has caused lowest ratings EVER!” the president added in a reference to NASCAR’s move last month to prohibit displaying the Confederate battle flag.Contrary to Trump’s tweet, NASCAR’s ratings have actually increased from previous years, according to Speed Report.The flag has been commonly displayed at NASCAR races for decades. NASCAR in 2015 had asked that fans not fly the flag following the slaughter in Charleston, South Carolina, of nine Black churchgoers by racist Dylan Roof, but many fans had ignored that request.Wallace, the only Black full-time driver on the NASCAR Cup circuit, has been an outspoken critic of the Confederate flag and has called on the racing organization to “get them out of” events. “No one should feel uncomfortable when they come to a NASCAR race,” Wallace said last month.Days later, NASCAR announced that “The display of the confederate flag will be prohibited from all NASCAR events and properties.”The White House declined CNBC’s request for comment on the president’s tweet about the Confederate flag. The Trump campaign did not immediately respond to a request for comment.Wallace had also spoken out after the killing of George Floyd, an unarmed Black man who died when a Minneapolis police officer knelt on his neck for about eight minutes. Floyd’s death, which was captured on video, set off a wave of massive protests across the nation.In June, Wallace wore a shirt bearing the words “I Can’t Breathe/Black Lives Matter” before a race in Atlanta.Later that month, NASCAR announced that a noose had been found in Wallace’s garage stall at a race in Talladega, Alabama, and that it had launched an investigation.The discovery immediately stirred speculation that the noose was an act of retaliation. “There is no place for racism in NASCAR, and this act only strengthens our resolve to make the sport open and welcoming to all,” the organization said in a statement at the time.Wallace, too, weighed in, tweeting that “the despicable act of racism and hatred leaves me incredibly saddened and serves as a painful reminder of how much further we have to go as a society and how persistent we must be in the fight against racism.”A campaign sign for U.S. President Donald Trump sits beside a Confederate flag bearing the words “I ain’t coming down” in the backyard of a home in Sandston, Virginia, U.S., July 4, 2020.Kevin Lemarque | ReutersBut the FBI determined that the rope had been used to pull down the door of the garage since as early as fall 2019. U.S. Attorney Jay Town and FBI Special Agent in Charge Johnnie Sharp Jr. said their investigation determined “nobody could have known Mr. Wallace would be assigned to garage number 4 last week.”The FBI concluded that no crime had been committed.The controversy over symbols of the Confederacy came amid a national reckoning over race and police brutality in the wake of the deaths of Floyd and other Black people by police. Activists have called for states and localities to remove public statues of historical figures they view as problematic. Some statues have been defaced or torn down by protesters. Trump has been a vocal critic of the movement, decrying “anarchists” who harm monuments and threatening jail time for those who participate.In his Independence Day speech at Mount Rushmore in South Dakota over the weekend, Trump denounced what he described as a “left-wing cultural revolution is designed to overthrow the American Revolution.””To make this possible, they are determined to tear down every statue, symbol and memory of our national heritage,” Trump said.Former Vice President Joe Biden, who is the presumptive Democratic nominee in the 2020 election, took a more nuanced view, saying at a recent press conference that he believes Confederate monuments could be moved to museums.The debate over the flag in particular has not been limited to NASCAR. Mississippi’s Republican governor last week signed into law the decision to change the state’s flag, which bears the “stars and bars” design of the Confederate flag.This is breaking news. Please check back for updates.