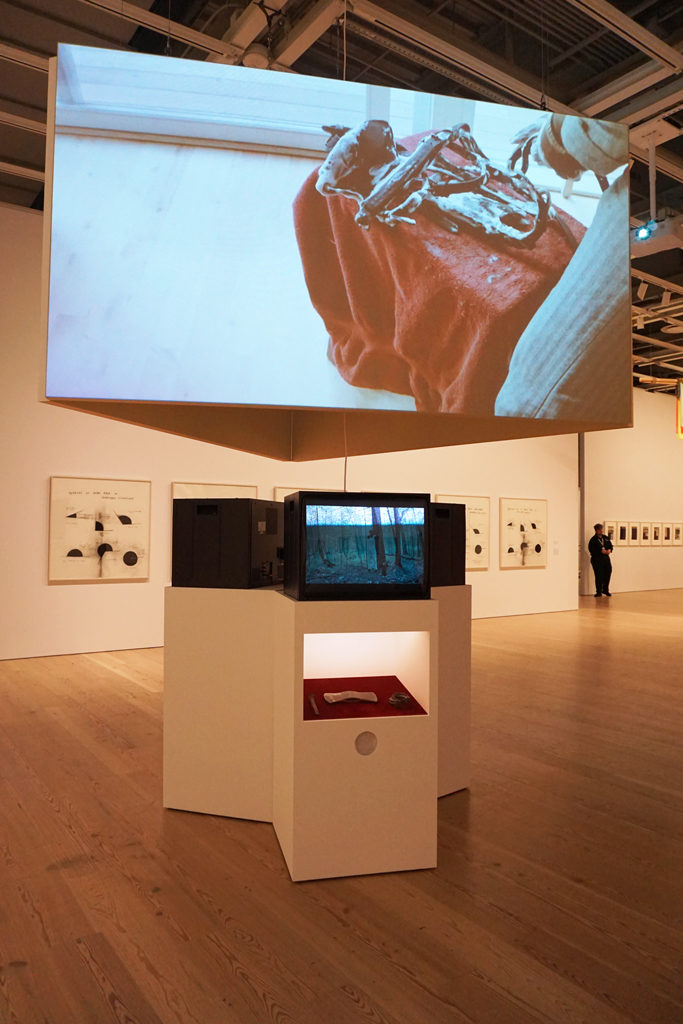 Tiona Nekkia McClodden, I prayed to the wrong god for you, 2019, in the 2019 Whitney Biennial, Whitney Museum, New York.MAXIMILÍANO DURÓN/ARTNEWS
The Whitney Museum in New York has awarded its Bucksbaum Award, a prize for an artist participating in the Whitney Biennial, to Tiona Nekkia McClodden. Through the award, the Philadelphia-based artist will take home $100,000.
“McClodden’s work is bold and original and her contribution to the Whitney Biennial is extraordinarily rich with cultural, historical, and spiritual resonances,” Adam Weinberg, the Whitney’s director, said in a statement.At the Whitney Biennial, which is on view through September 22, McClodden has on view the video installation I prayed to the wrong god for you (2019), in which the artist shows herself carving a fir tree that she herself felled. The carving is meant as a ritual dedicated to the god Shango, a deity from the Santería/Lucumi religion; the wooden objects the artist used were brought with her on travels around America, Cuba, and Nigeria. The installation includes videos, which appear projected on a triangular hanging screen and on monitors, that detail the process of this carving, and they are accompanied by a set of related objects.In his review of the exhibition for ARTnews, critic Greg Tate wrote that McClodden’s work was emblematic of this year’s Whitney Biennial, in which “women artists of Afro-diasporic descent numerically and ethnically dominate as a group.”As part of the Whitney Biennial, which was curated by Rujeko Hockley and Jane Panetta, McClodden also staged a “Stonewall 50” event that focused on the BDSM community, of which she is a member. “The Whitney’s proximity to the Meatpacking district is very interesting because of its history with the S&M clubs that were there,” she told ARTnews in a conversation about lesbian visibility earlier this year. “I’m focusing on that community primarily because I’m seeing that the S&M community’s aesthetics are being pushed [into the mainstream] more than the respect for the individuals, their intellect, their identities, the people themselves.”Past winners of the Bucksbaum Award include Pope.L, Zoe Leonard, Mark Bradford, and Michael Asher, among others.

Remembering Robert Frank Through His Pioneering Images of America -ARTnews