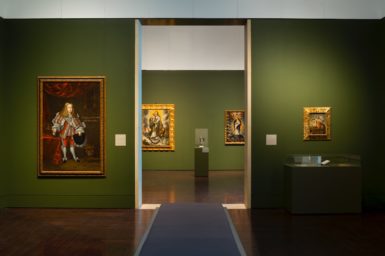 Installation view of Art of the Spanish Americas galleries, Blanton Museum of Art, the University of Texas at Austin.

With a $2 million gift from the Carl & Marilynn Thoma Art Foundation, the University of Texas at Austin’s Blanton Museum of Art will permanently endow a curatorial role dedicated to art of the Spanish and Portuguese Americas. The Marilynn Thoma Associate Curator position, the first named and endowed post at the Blanton, is held by Rosario I. Granados, who joined the institution in 2016.

“The Blanton’s leadership in this burgeoning field is grounded in our long tradition as one of the first institutions in the United States to seriously champion the study of Latin American art,” Granados said in a statement. “I am grateful to the Thoma Foundation for their renewed commitment to our program.”

Carl and Marilynn Thoma are members of the Blanton National Leadership Board. Their foundation has previously loaned the museum works and provided a three-year grant to support curatorial and scholarly research in Latin American art. With that funding, Granados led a cross-campus program focused on object-based teaching, research, and scholarship.

Having co-organized “Ink and Memory: A Documentary History of the People and Things of the Spanish Americas” in 2018, Granados’s forthcoming exhibitions include “Mapping Memory: Space and History in 16th-Century Mexico” and “Painted Cloth: Fashion and Ritual in Colonial Latin America.” She previously taught undergraduate and graduate seminars about religion, gender studies, cultural heritage, and Latin American art at the University of Chicago and Skidmore College.

Simone Wicha, director of the Blanton, said, “This visionary endowment will sustain and elevate the Blanton’s role as a hub for interdisciplinary collaboration, research, and programming around Spanish American art on the UT Austin campus. To have the position fully endowed in perpetuity establishes the Blanton as the leading institution for the study of Spanish American art and visual culture, guaranteeing that this meaningful work will continue for years to come.”