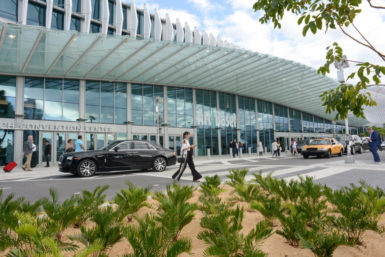 At the fair’s upcoming edition in December, it will unveil a new sector called  Meridians that will host large-scale projects in the Grand Ballroom of the Miami Beach Convention Center, which it calls home each year.

The project, which is similar in spirit to the Unlimited section at Art Basel’s fair in Switzerland, will be curated by independent curator and critic Magalí Arriola, who will solicit works from artists and galleries before a selection committee decides which pieces will be exhibited.

Arriola said in a statement to press, “Meridians brings enormous possibilities to Art Basel in Miami Beach, creating a vibrant platform for large-scale sculptures, installations, and moving image works, as well as performance—which did not have a dedicated space at the fair until now.”

The convention center’s new ballroom sprawls over 60,000 feet, and is connected to the main exhibition area. That amount of space will allow work to be showcased that would otherwise be too big for a standard booth size.

“The sheer scale of the Grand Ballroom and its immediate proximity to the show floor give us unprecedented opportunities to present ambitious artistic projects that go far beyond the limits of the conventional art fair layout,” Noah Horowitz, Art Basel’s director of the Americas, said in a statement, adding that the project “heralds an exciting new chapter for Art Basel in Miami Beach.”