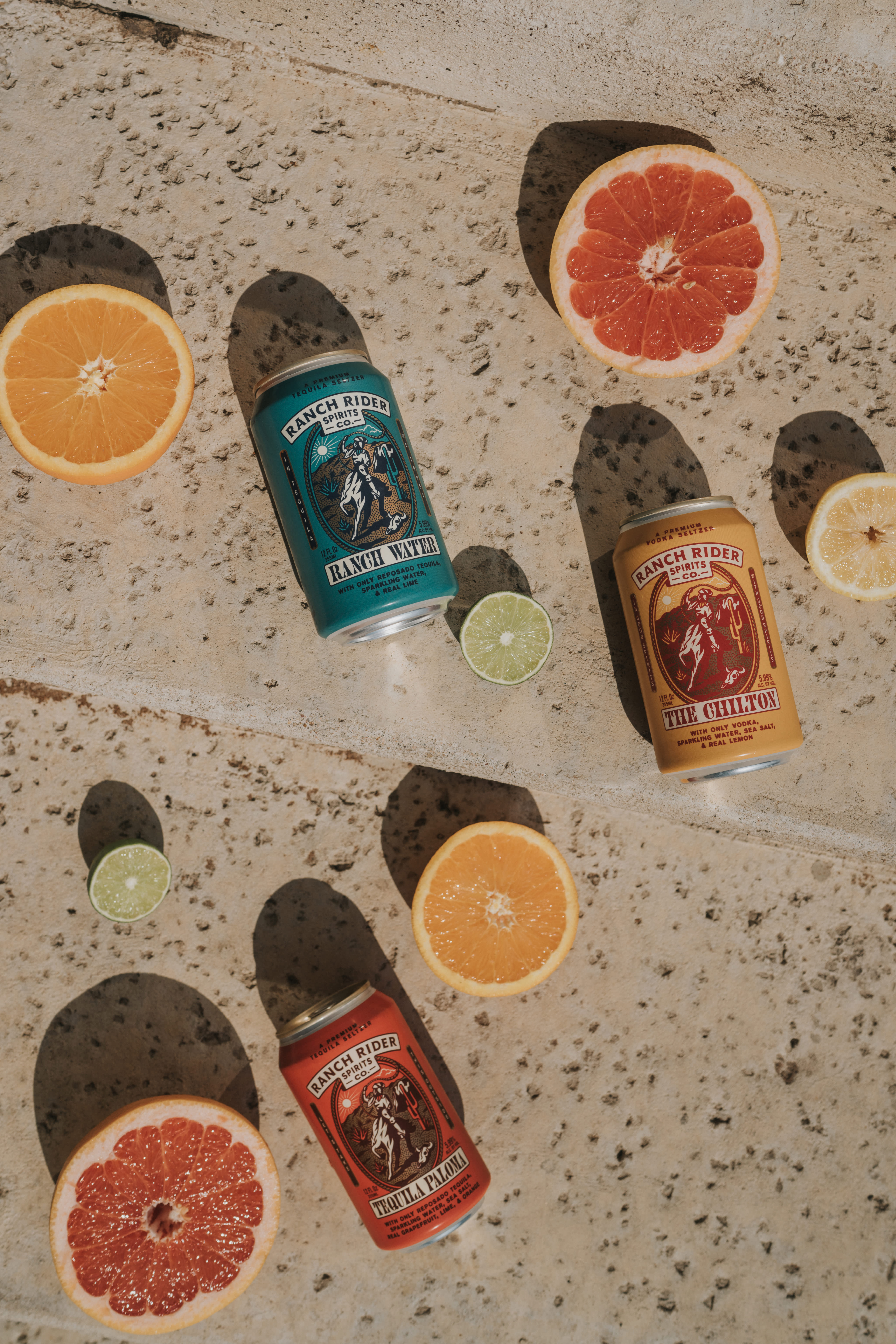 Brian and Quentin at Ranch Rider Spirits.Source: Ranch Rider SpiritsRanch Rider Spirits’ cocktail line is about as Texan as you can get.Built and bred in the vibrant heart of Austin, Texas, the canned cocktails are the tradecraft of co-founders Quentin Cantu and Brian Murphy. Ranch Rider Spirits offers four distinctly Texan craft cocktails void of preservatives and additives in simple 12-ounce cans.Cantu, a Texas-native, put in a 6-year stint in Washington, D.C., working in politics before leaving for the Lone Star State in 2016. Thirsting for a career change he enrolled at University of Texas McCombs Business School where he struck a friendship with Murphy.”I think that we were just really hungry to learn new skills outside of class and outside of our previous careers,” Cantu told CNBC. Equipped with the basics of business, Cantu and Murphy launched their first venture — a food truck that offered healthier options to the students on the sprawling UT campus.”We would leave at 6 a.m. in the morning, go buy food, cook that day and then head to class and do it all over again on very little sleep,” Cantu recounted, explaining that the two launched the business while completing a full-course load of UT’s demanding MBA program.As requests surged for the meals prepared aboard the affectionately dubbed “Ranch Hand” food truck, Cantu and Murphy expanded the business to include an offering of handmade cocktails.”I think we kind of hit a nerve,” Cantu explained of the relative quick success. “We satisfied a lot of unknown consumer demand for something that was not beer, but that also wasn’t spiked seltzer.”In order to keep up with demand, the two found themselves brainstorming ways they could continue to scale the happy accident of a potential booze business.”We didn’t want to just open a bar. We wanted to make sure that the product that we made could be enjoyed by everyone for an extended period of time,” Cantu told CNBC, adding that a canned product gave them flexibility to pursue e-commerce sales as well as deals with health-focused grocery stores like Whole Foods.Ranch Rider SpiritsSource: Ranch Rider SpiritsIn January 2020, with the grace of Austin angel investors, Cantu and Murphy launched their first cans onto the local market. Four months later, as the coronavirus pandemic raged and forced restaurants and bars to shut down, Cantu and Murphy saw demand skyrocket as patrons brought cocktail culture home.”Obviously people were quarantining at home and spending a lot more time online during the pandemic. And so, we really invested in digital marketing, something that we could both utilize from our previous careers before business school,” Cantu explained.Online sales of alcohol during the third week of March rose a tremendous 243%, according to Nielsen data published by Bloomberg.Data from IWSR and Nielsen indicated that merchants in the ready-to-drink sector saw an uptick in sales during the coronavirus pandemic, according to BevAlc Insights by alcohol e-commerce platform Drizly.For a 23-week period amid the coronavirus pandemic ending on August 8, the ready-to-drink sector saw a year-over-year growth in off-premise dollar sales of 86.8%, according to Nielsen. Before the coronavirus pandemic, the sector saw growth of 21.5% for a 52-week period ending February 29, according to data analyzed by Drizly.”If you think about the value proposition of a canned cocktail like Ranch Rider, if you go to the lake or the pool with friends and you want to drink a spirit-based cocktail, you don’t want to bring a glass bottle, you don’t want to bring ice, you don’t want to bring fresh limes and garnishes,” Cantu explained.Ranch Rider Spirits took the No. 2 spot on Drizly’s top-selling 2020 brands, outpacing ready-to-drink offerings from industry giants like Ketel One, 1800 Tequila, Jim Beam, and Cutwater Spirits.In their first year of business, Ranch Rider brought in approximately $4 million in revenue, nearly quadrupling their conservative forecasts.”A lot of our growth has been organic because we’ve placed an emphasis on slowly cultivating an audience, mostly in Texas, that appreciates the craftmanship of our product,” Cantu explained.Austin’s culture of craftRanch Rider SpiritsSource: Ranch Rider SpiritsThe funky, upbeat heart of Texas is home to the University of Texas, the annual SXSW (South by Southwest) technology conference, several art and music festivals and has become somewhat of a mecca for start-ups, outdrawing Silicon Valley in some respects.The city thrives on a vibrant patio culture fueled by food, drinks and live music.”The culture of Texas, and in Austin in particular, is a culture of craft,” explained Cantu. “There is a high premium and appreciation and respect for craftmanship here and we never wanted to loose sight of that value since it propelled our growth.”In order to maintain full fidelity of the production process, Cantu and Murphy built a 20,000 square foot facility about 40 minutes outside of Austin.”We felt that it was important to touch and feel everything that was going into our product. We didn’t want to outsource this process to someone else and I truly think that a lot of people in Austin really appreciate that attention to detail,” he added.’Actual citrus, actual spirits’Ranch Rider Spirits Co. canned cocktailsCourtesy of Ranch Rider SpiritsLast week, Ranch Rider Spirits debuted their fourth canned cocktail named “The Buck,” a Moscow Mule recipe made with six-times distilled vodka, fresh pressed organic ginger, fresh squeezed lime and sparkling water.”The Buck” contains 5.9% alcohol and 119 calories and follows on the heels of “Ranch Water,” a Reposado tequila-based cocktail with a splash of sparkling water and fresh-squeezed lime juice. The iconic West Texas cocktail, “The Chilton,” is where the fresh squeezed lemon juice shines alongside a sprinkle of sea salt and vodka.And rounding out the portfolio is the “Tequila Paloma,” where Reposado tequila, fresh-squeeze grapefruit, lime, orange and sparkling water coalesce.”We have this printed on the label of each can, but we keep it stupid simple. We use actual citrus, actual spirits, no additives, no preservatives, no sugar content whatsoever,” explained Cantu. “It tastes fresh because it’s not artificial, not manufactured in lab,” he added.

Databricks is on track for $1 billion in revenue in 2022, investor says
‘War’ footing needed to correct economists’ miscalculations on climate change, says professor
To Top
error: Content is protected !!