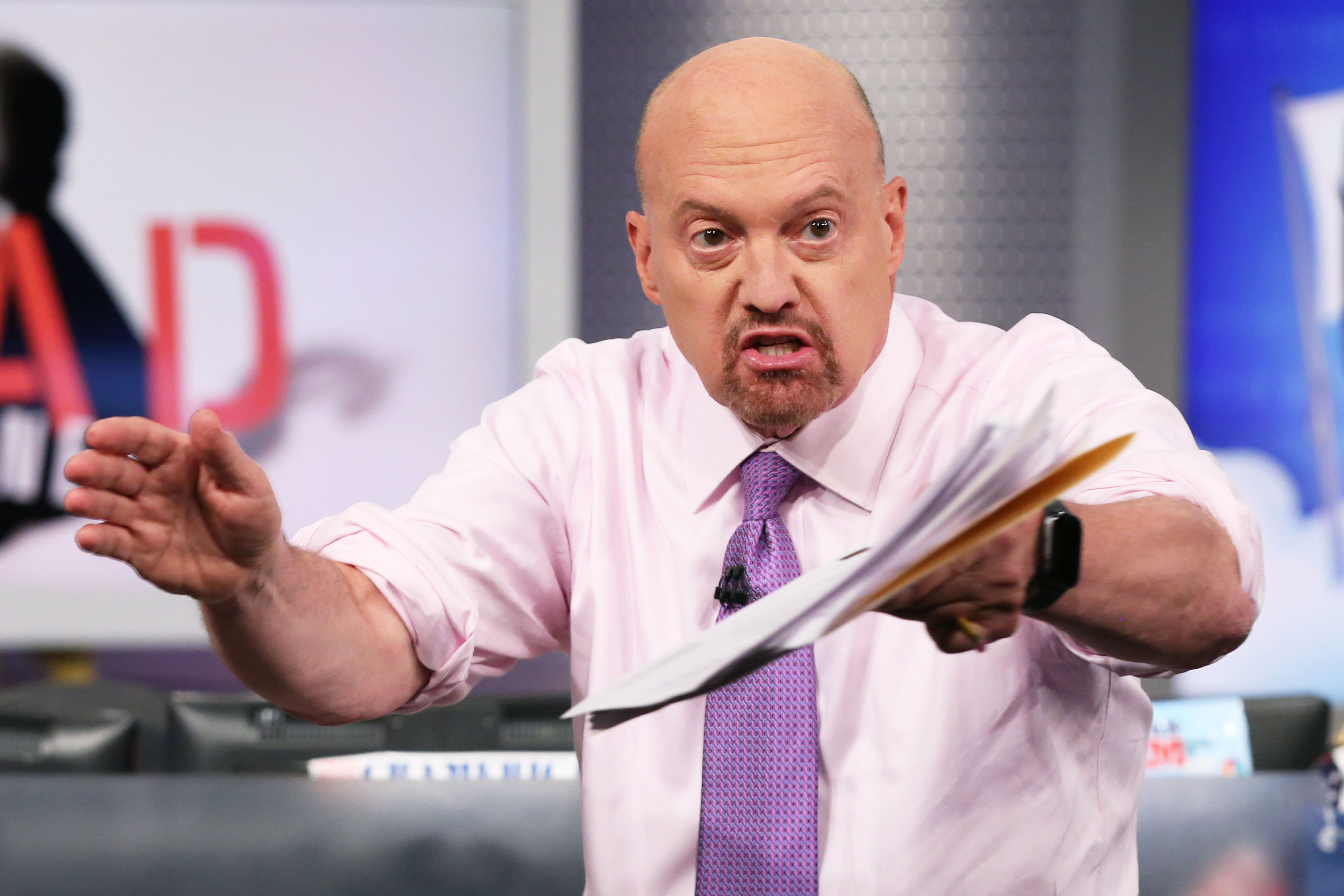 Last week, Jim Cramer held his annual fantasy stock draft, and the “Mad Money” host now is helping investors scan the market “waiver wire” to find some bargains.”That’s some authentic fantasy football gibberish that means trying to pick up some bargains, players not signed by other teams that have turned out to be interesting prospects or cast off and maybe they shouldn’t have been” Cramer said Wednesday.In addition to Okta, Service Now and Salesforce.com, which he also picked last week, here are the new companies Cramer thinks investors to add into their portfolio after Week 1:StarbucksCoffee giant Starbucks is down more than 5% since Thursday, closing at 90.98 on Wednesday. Its stock has been hurt by comments last week from CEO Kevin Johnson, who said next year’s fiscal earnings will see slower-than-expected growth because a one-time tax benefit boosted 2019 earnings, and by new of a Security and Exchange Commission inquiry into its accounting practices.But Cramer isn’t worried about either of those developments, saying Johnson’s remarks don’t really matter because the “company operating income growth model is intact.”The SEC issue “was a nothing burger plain and simple,” Cramer argued.”There were 200 other companies that were flagged. It was a routine accounting inquiry into an industry. Only Starbucks made the headlines,” Cramer said.All told, this makes Starbucks a good snag off the waiver wire, Cramer said.VM WareSoftware company VMWare’s stock, which closed at 154.43 on Wednesday, is down nearly 25% since its 2019 high of 205.52 on May 16th.But Cramer said he has renewed confidence in the Palo Alto, California-based company, in part because COO Sanjay Poonen explained on “Mad Money” on Tuesday how its recent acquisitions could benefit it.VMWare, a cloud virtualization company, acquired cybersecurity firm Carbon Black and Pivotal, which has products to help companies create and install their software across different server infrastructure. The acquisitions were valued at $4.8 billion.”I had been skeptical given that Pivotal seemed to be a castoff from VMWare’s parent company Dell. But Poonen changed my mind” Cramer said. “I also believe that the Dell-Crowdstrike relationship will be severally crimped by the Carbon Black acquisition. No wonder VMWare rallied more than a buck today.”SplunkSplunk CEO Doug Merritt appeared on “Mad Money” last week, and after reflecting upon what he heard, Cramer said he sees a strong investment opportunity.”I believe that we are getting a chance to buy that one at an incredible bargain,” Cramer said. “Spunk is a premier data analytics play that would helps its clients harvest actual insights from machine data. And in a world where Salesforce.com is willing to buy Tableau Software, if this thing just stays here, Spunk could make a ton of sense as a takeover target,” Cramer said.Splunk, which focuses largely on analyzing big data, has seen its stock drop almost 20% from its 2019 high. It sits at 113.89 after Wednesday’s close, down from 140.73 on July 26.”Splunk is for real and this stock market is acting as if it is fake,” Cramer added.Potential PicksCramer offered two more companies that would make sense as possible waiver-wire picks: Shopify and Chipotle.Cramer praised Shopify for its recent acquisition of warehouse automation start-up 6 River for $450 million. Shopify is expected to soon be second behind Amazon for U.S. e-commerce.”But the stock’s in a downtrend — it has now given up 70 straight points—and who knows when it will find the bottom. Maybe that happened today,” Cramer said, noting its stock picked up $10 on Wednesday.As for Chipotle, Cramer said because it is the top performer in the S&P 500 yet starts to hit a wall because of a stock market rotation, “it’s bound to scare people who then go on to foment reasons for the decline.””But there aren’t any,” Cramer said, adding Chipotle also caught got up in the same SEC inquiry as Starbucks.In fact, it’s business seems to be accelerating, Cramer said.”When you get a chance to buy the best of the best down almost 10%, that’s like stashing a wide receiver over a bye week,” Cramer said.