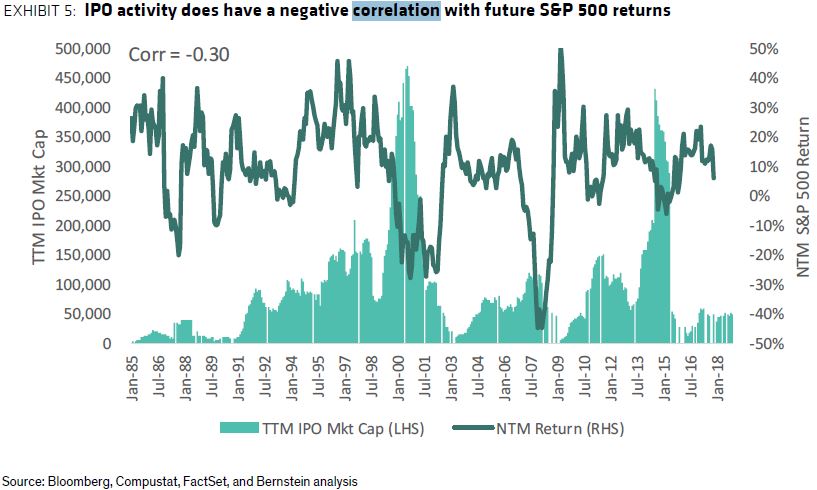 Beyond Meat CEO Ethan Brown (C) celebrates with guests after ringing the opening bell at Nasdaq MarketSite, May 2, 2019 in New York City.

The red-hot market for new public companies in 2019 like Beyond Meat and Chewy could spell bad news for the broader stock market in the year ahead.

An uptick in IPO activity is correlated with a downturn in S&P 500 returns over the following 12 months, Bernstein equity strategist Noah Weisberger warned clients in a note on Monday. That’s because companies looking to go public tend to wait to take advantage of what they perceive to be the market’s richest valuations, at or near levels many investors feel the market many be overpriced, the equity strategist told clients.

It’s also because of “the notion that incremental IPO supply is difficult for the market to digest, suppressing forward returns,” Weisberger wrote. “IPO activity is (mildly) cyclical, as management teams take the opportunity to go public while being buoyed by favorable economic conditions.”

“Interestingly, the economic expansion which began in late 2016 was not matched by a pickup in IPO activity until early 2019, suggesting that this current wave of IPOs may simply be catching up to growth,” he added.

As the Bernstein chart below illustrates, more IPO activity is negative related to future S&P 500 returns. More IPO activity in the prior 12 months tends to be an indicator of market losses to come.

“Said differently,” Weisberger said. “IPO activity leads and is negatively correlated to market returns” with a value of -0.3.

A recent wave of IPOs has taken Wall Street by storm, with names like meat-alternative company Beyond Meat, online pet retailer Chewy and cybersecurity firm Crowdstrike up 163%, 78% and 70%, respectively, during their first day of trading.

The Renaissance Capital IPO ETF, a basket of the 60 or so most recent large IPOs, is up 35% this year, more than twice the performance of the S&P 500.

“Looking back to the mid-1980s, IPO activity has had a clear ebb and flow. While the late 1990s occupy a special place in market history, IPO activity was outsized all decade long, peaking in early 2000,” Weisberger wrote.

But while the meteoric rise of stocks representing beefless burgers and Fido’s squeaker toys has made a number of insiders and shrewd investors rich, some are a bit more concerned. Many of the so-called IPO unicorns rely on expectations for their rapid growth for their lofty valuations, a bet that could backfire if the market sours as some worry.

Today’s IPOs are essentially, a “very bright private equity crowd desperately hitting a fleeting late cycle bid after missing that bid in Q4 and looking down the barrel of a 20 percent U.S. equity market drawdown,” Larry McDonald of the Bear Traps Report told CNBC in March.

“They should have done these deals all last year, and they put it off,” he added at the time, noting that the Federal Reserve later swooped in to save the day by signaling a pause in its cycle of rate hikes. But that insurance may not always be there.

Economists and investors are preparing for Fed’s next policy move announcement later this week, eager to see if the central bank telegraphs a rate cut amid weakening economic data worldwide. Some recession indicators, like the partial inversion of the yield curve, have also spurred market angst and prompted some to put more money in safer assets like bonds and gold.

“The relationship between IPO activity and forward returns was especially pronounced in the dot-com bubble and again in mid-2014,” Weisberger added. “Interestingly, there was not as dramatic an uptick in IPO activity during the lead-up to the Global Financial Crisis, although some notable transactions such as Blackstone’s IPO did occur at that time.”