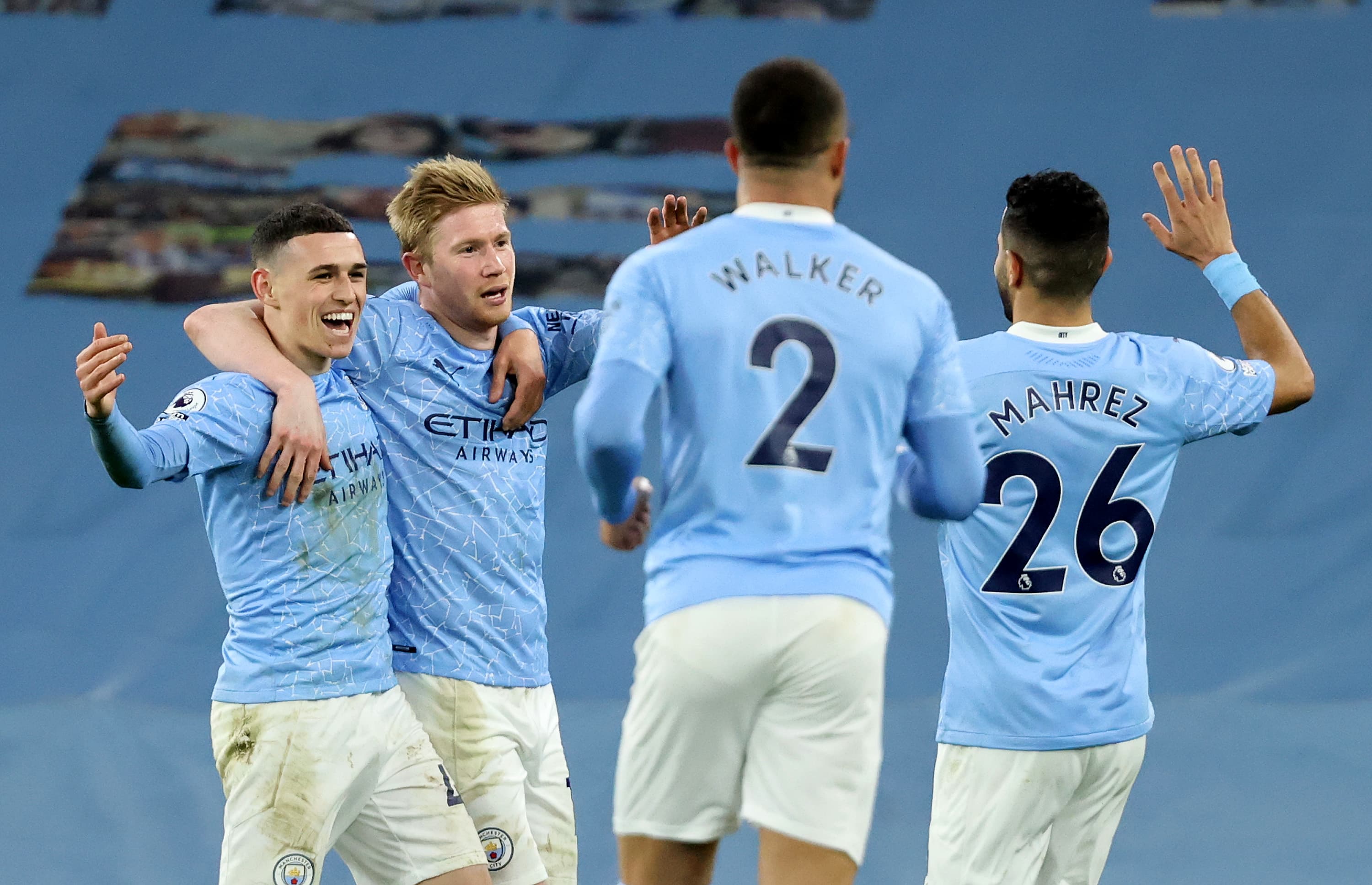 Kevin De Bruyne of Manchester City celebrates after scoring their team’s fifth goal with team mates Phil Foden and Riyad Mahrez during the Premier League match between Manchester City and Southampton at Etihad Stadium on March 10, 2021 in Manchester, England.Clive Brunskill | Getty Images Sport | Getty ImagesLONDON — While the soccer community celebrated the failed launch of the European Super League last week, the motivating factors behind the proposal haven’t gone away.Now known as the “dirty dozen,” 12 powerful European soccer clubs tried to form their own enclosed league, which was scuppered just days afterward due to pressure from fans, authorities and governments. These teams, particularly in Spain, are still nursing pandemic-induced debt, while revenues at many clubs around the world have been hit after virus restrictions forced games to be played behind closed doors — evaporating matchday incomes.What comes next?Florentino Perez, the president of Real Madrid which was one of the clubs involved, has told Spanish media that the project, or one very similar, will still move on. His Barcelona counterpart Joan Laporta has stressed that the ESL clubs are open to dialogue with UEFA, Europe’s governing body, in a bid to revive the project.Simon Chadwick, a director of Eurasian sport at the Emlyon Business School, believes suggestions that the Super League has fallen apart are naive, telling CNBC that Europe will get a “super league by a different name,” adding that it is “a case of when, not if.” Chadwick argues that the coming years will bring further polarization and industrial concentration, with the big clubs set to accumulate further power, and the gap between them and the smaller clubs growing further.American inspirationThis, he says, will be seen through how major clubs look to develop new revenue streams, with over-the-top broadcasting set to feature prominently. He compares the NFL’s recent TV rights deal, worth around $110 billion over 11 years, to the English Premier League’s current domestic broadcast deal worth £4.7 billion ($6.6 billion), secured in 2018 and due to run out this year.While the NFL has grown in popularity outside of the U.S. in recent years, it is still dwarfed globally by England’s Premier League, with the UEFA Champions League also having an avid worldwide audience. Tech companies have joined the bidding wars for the Premier League’s broadcast rights in recent auctions, easing the logistical obstacles to global distribution.  New ownersThe fallout from the Super League proposals has also seen some fans call for new club owners. Spotify CEO and founder Daniel Ek has expressed his interest in buying Arsenal, telling CNBC he has secured the funds for a potential offer for the North London club. But current owner Stan Kroenke, who also owns NFL franchise the LA Rams, has ruled out any sale, stressing he would not entertain any offer.Meanwhile Jim O’Neill, the chairman of British think tank Chatham House and former chair of Goldman Sachs Asset Management, and the hedge fund manager Paul Marshall have called on the owners of Manchester United, the Glazer family, to cut their majority stake to a maximum of 49.9% in a bid to allow for a broader group of investors to have a say in the running of the club.Chadwick downplayed the prospect of current owners looking to sell, adding that “if this is such an unprofitable, difficult business that doesn’t yield the kinds of returns that owners are looking for,” then Manchester United’s owners, the Glazers, would have pulled out a long time ago.

Biden wants to raise $1.5 trillion by taxing the rich. Here’s how
U.S. to restrict travel from India effective May 4 amid massive Covid surge
To Top
error: Content is protected !!