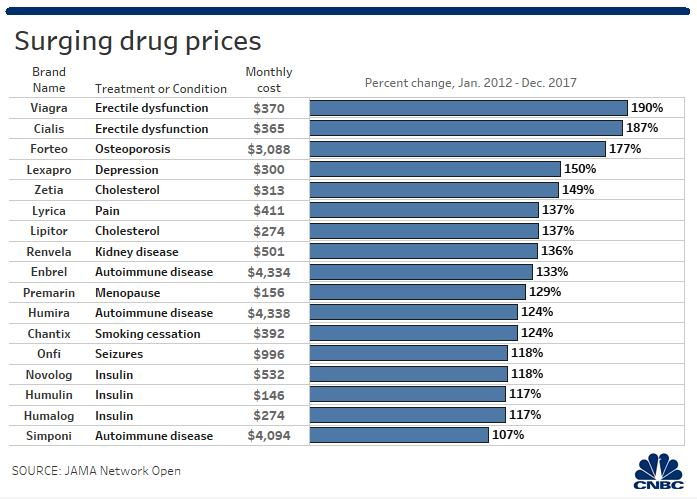 The prescription drugs that have seen the most rapid growth in cost in the U.S. don’t treat depression, cholesterol or even autoimmune diseases.

Blockbuster male libido treatments Viagra and Cialis saw the biggest price hikes among the 17 top-selling brand-name drugs that have seen costs surges from 2012 through 2017, according to a new study published Friday in the peer-reviewed Journal of the American Medical Association.

Researchers from the Scripps Research Translational Institute analyzed six years of pharmacy claims data from the Blue Cross Blue Shield Axis, a database of more than 35 million individuals with private prescription drug insurance. They found there was a “near universal” increase in net prices of 49 brand-name drugs with 17 of those drugs seeing prices double over the time period.

The largest price increase came from Pfizer’s Viagra, which surged by 190% over the six-year time period to $370 from $127 per prescription, according to the study. That was followed by Viagra rival Cialis, produced by Eli Lily, which rose by 187% to $365 from $127 for a prescription. Eli Lilly’s osteoporosis drug Forteo came in third with a 177% price increase.

Nathan Wineinger, an assistant professor at Scripps Research and lead author of the study, said researchers didn’t see any difference in cost increases between drugs that had been on the market for a significant period of time, were relatively new or a had a generic version. That “was disheartening,” he said.

Researchers said they were were limited by a lack of information on drug price rebates and how they affected net prices. Additionally, researchers only examined drugs that have exceeded $500 million in U.S. sales or $1 billion in sales worldwide.

The study was funded with a grant from the National Institutes of Health National Center for Advancing Translational Sciences. Wineinger said Blue Cross Blue Shield had no influence over the study.

High drug costs have become a rare bipartisan issue in Washington with lawmakers on both sides of the aisle demanding something be done. President Donald Trump has made lowering prices one of the key issues of his administration. Democrats are jockeying to prove they can lead reform.

Earlier this month, the Trump administration announced pharmaceutical companies would be required to disclose the list price of their prescription medicines in television commercials as soon as this summer. Health and Human Services Secretary Alex Azar told CNBC that the administration hopes the cost disclosures will eventually shame drugmakers into lowering their prices.

Drugmakers have been resistant to advertising list prices, the price before rebates and discounts, saying it’s simply the price that’s advertised, and not what consumers actually pay.

Pharma executives have instead thrown their support behind a Trump administration proposal that would give consumers an estimated $29 billion in rebates now paid to pharmacy benefit managers. Drug manufacturers pay PBMs the rebates for getting their drugs covered by Medicare’s Part D prescription plan.