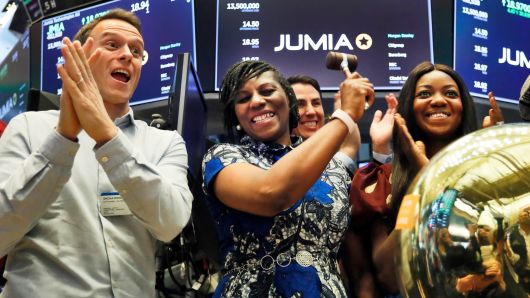 The largest e-commerce operator in Africa, Jumia Technologies, ended the day with its stock up more than 75.6% on its first day of trading at the New York Stock Exchange on Friday.

“The Amazon of Africa” has 4 million active customers as of the fourth quarter of 2018, the company said in its S-1 filing. Jumia operates in 14 African countries, including Ghana, Kenya, Ivory Coast, Morocco and Egypt.

Jumia, founded in 2012, is the first African unicorn to go public.

As of December 2018, the company has accumulated losses of nearly $1 billion. Similar to Amazon, its initial shareholders will have to be patient on the path to profitability.

Jumia’s platform lets customers buy a smartphone, a pair of shoes or a load of groceries. Its logistics segment lets you book travel and hotels, and the fast-pay segment lets you pay your bills or order a pizza.

The difficulty for e-commerce in Africa is for the sellers because of the inefficient infrastructure of the continent, Jumia CEO Sacha Poignonnec told CNBC’s “Squawk Alley” on Friday.

“Its provides a lot of inclusion for consumers who have not necessarily the right access to retail,” Poignonnec said.

Poignonnec also said there’s a big opportunity in Africa because so many people haven’t yet experienced online shopping.

“When we ask the people who have never used online shopping yet, the No. 1 reason that comes out is, ‘I don’t know how to shop online,'” said Poignonnec. “That tells you it’s not about infrastructure, it’s about consumers getting used to it.”

Jumia, headquartered in Germany, works with local entrepreneurs and logistics companies to deliver the products. Half the packages are going into the major cities, and half into the secondary cities and rural areas.

Some of Jumia’s biggest customers are Apple, HP and Huawei.