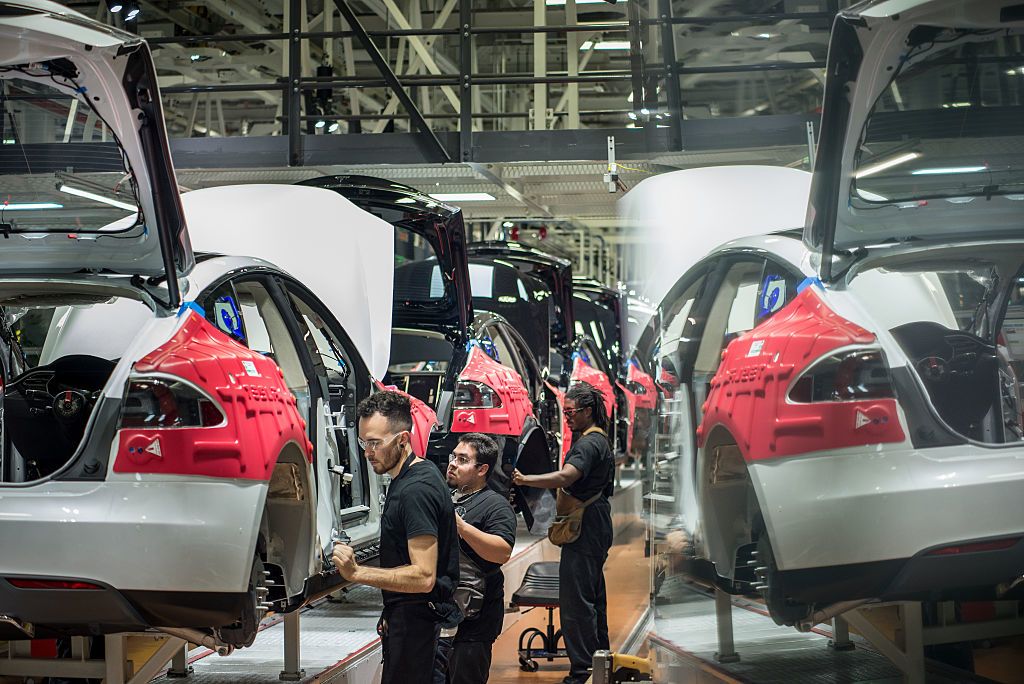 Workers assemble cars on the line at Tesla’s factory in Fremont.

Tesla CEO Elon Musk proved to analysts Tuesday that he can hit his lofty production and delivery targets, but now investors want to know if he can do the same with profits.

The company’s second-quarter production and delivery numbers, released late Tuesday, eased investors’ concerns about demand for its electric cars and SUVs with the company delivering a record 95,200 vehicles in the last quarter. Tesla’s stock shot up by as much as 8% in after-market trading Tuesday and was up by about 5% Wednesday afternoon.

“While there were a good amount of ‘leaked’ emails and reports prophesizing a potential ‘record quarter’ for deliveries, we had not spoken to any investors that expected deliveries to be this high,” Morgan Stanley analyst Adam Jonas said in a research note.

The results mark “a turning point for the Tesla story,” Gene Munster, an analyst Loup Ventures, said in an interview on CNBC. “The key takeaway here is there is an undeniable truth that is starting to happen, and that is that demand of EVs is starting to go up.”

Investors want to know whether the quarter’s performance is repeatable, especially after losing several key production executives ahead of the announcement. They also want to see whether Tesla sacrificed profit margins in its efforts to ramp up production.

“Tesla may/is likely to overproduce in a quarter or two this year, and investors will have no sense if the excess production ended up entirely in inventory, or is legitimately destined for customers,” analysts at Bernstein research wrote in a note to investors Wednesday.

The company delivered 77,750 of its best-selling Model 3 sedan, beating analysts’ estimates by 3,650, according to data compiled by FactSet.

Dan Ives an analyst at Wedbush Securities, called the Model 3 results the “linchpin of the Tesla growth story for the coming years.”

To be sure, Tesla’s buyers lost part of a key tax credit that subsidized the cost of the electric cars and the company cut prices on several models throughout the quarter to boost demand. The federal tax credit for Tesla’s cars was cut from $7,750 last year to just $1,875 on Monday. Musk even took to Twitter to remind people to take advantage before the credit shrank. That’s something that could “weigh on profitability” when the company reports its earnings in a few weeks, analysts said.

“The Q2 delivery beat does not change our cautious view on Q2 earnings,” UBS analysts Colin Langan said in a note to investors. “Price reductions, the wider availability of cheaper versions of the Model 3, and the phase out of the US EV tax credit ($1,875) helped Q2 deliveries. The price cuts will likely result in margin pressure.”

The company is also facing increased competition for the high-end electric sports car market as automakers from Ford to Jaguar invest billions of dollars to develop their own electric lineups. It’s something analysts at Goldman Sachs pointed to as they saw Tesla’s competitive lead beginning to wane in the face of other EV launches. Volkswagen and Mercedes-Benz began taking orders in May for new battery-electric vehicles with plans to roll out more models in the coming years. Jaguar’s I-Pace all-electric SUV swept industry awards at the New York Auto Show in April.

The reporter, however, gave some analysts reason for optimism.

“After what’s been, in my opinion, the darkest chapter in the company’s history, finally some good news for Tesla going into a holiday weekend,” Ives said.