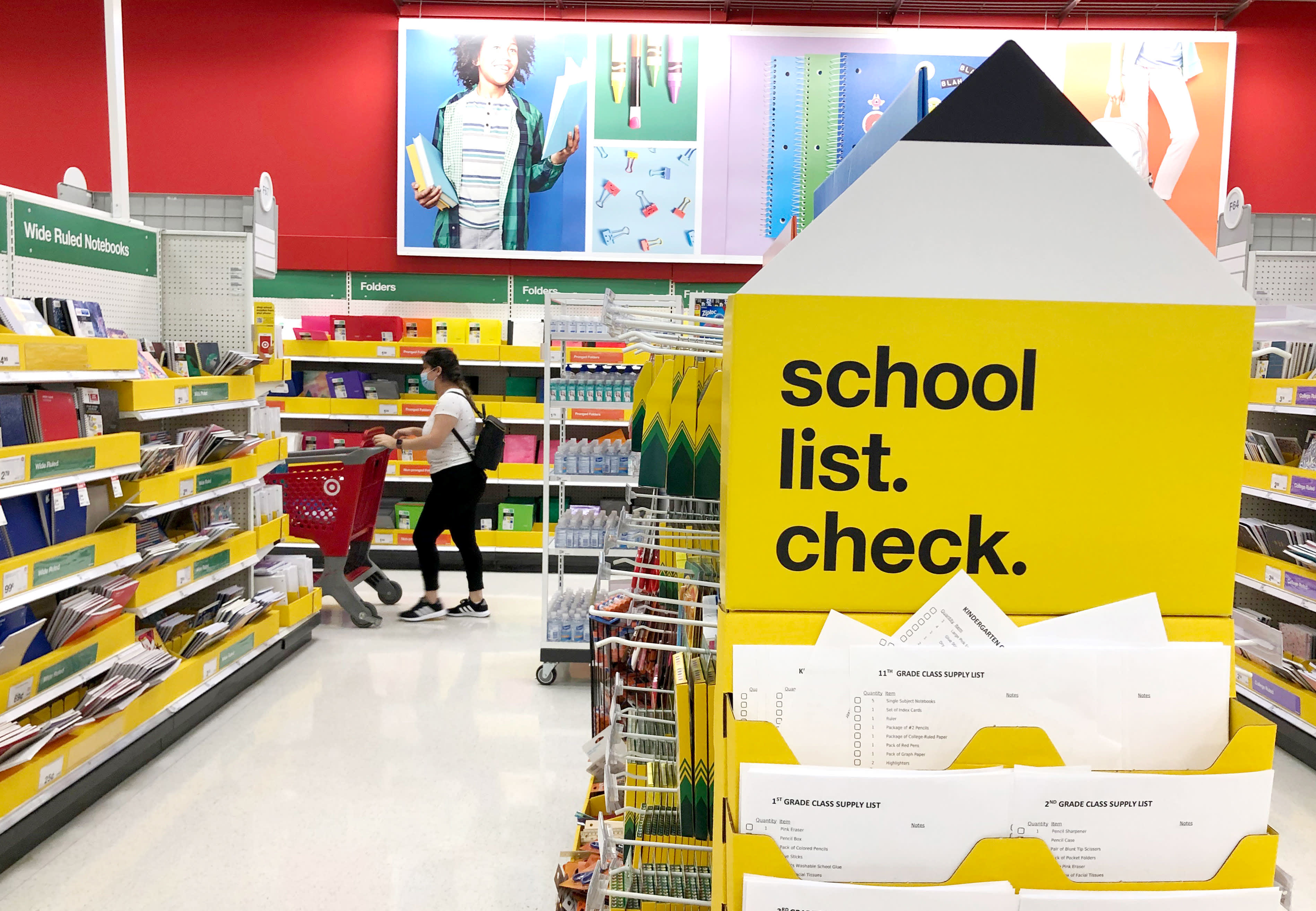 Target said Wednesday fiscal second-quarter sales rose in every merchandise category from apparel to grocery — even when compared with last year’s pandemic-fueled record pace, helping the retailer top earnings estimates. With back-to-school spending off to a promising start, the big-box retailer raised its forecast for the year. But shares closed Wednesday down 2.78% to $247.58.Target expects to see comparable sales, a key retail metric that tracks sales online and at stores open at least a year, rise by high single-digits in the second half of the year. It had previously anticipated growth in the single digits.CEO Brian Cornell said in a call with reporters that parents are snapping up backpacks, lunchboxes and school uniforms and preparing for their children to resume in-person learning. He said college students, too, have shown eagerness to spend after the pandemic delayed moving out of childhood bedrooms.Chief Financial Officer Michael Fiddelke said the forecast “reflects our confidence in Target’s ability to continue putting profitable growth on top of profitable growth — even in a volatile environment.”Here’s what Target reported for the fiscal second quarter ended July 31, compared with Refinitiv consensus estimates:Earnings per share: $3.64 adjusted vs. $3.49 expectedRevenue: $25.16 billion vs. $25.08 billion expectedNet income jumped to $1.82 billion, or $3.65 per share, from $1.7 billion, or $3.35 per share, a year earlier. Excluding items, the retailer earned $3.64 per share, higher than the $3.49 per share expected by analysts surveyed by Refinitiv.Total revenue rose 9.5% to $25.16 billion from the same period a year ago, slightly above analysts’ expectations of $25.08 billion. Target’s profits were nearly double those in the same quarter of 2019, before the pandemic supercharged sales.Last year’s sales blew away Wall Street’s estimates, with comparable sales surging by 24.3% as its digital sales nearly tripled.Comparable sales in the most recent second quarter were more modest, with 8.9% growth. That was roughly in line with the 8.8% growth that analysts expected, according to a StreetAccount survey. Comparable store sales grew 8.7%, while digital comparable sales grew 10%. (These metrics were up 10.9% and 195%, respectively, in the year-ago quarter.)Target said its curbside pickup service, Drive Up, and home delivery service Shipt — two options that are contactless — have not faded in popularity. Sales through same-day services grew 55% in the second quarter — on top of more than 270% growth a year ago.Apparel sales grew at a double-digit rate, followed by essentials and beauty in the high single-digits.Even as the discount retailer put up big numbers, Cornell and Fiddelke pointed to opportunities for expansion. Fiddelke, for instance, said the company has remodeled more than half of its stores over the past four years, opened two new distribution centers and added 5,000 more items to curbside pickup.He said it signed leases for four more “sortation” centers, which will open in late 2021 and early 2022. The facilities help clear the backroom of stores, where many online purchases are packed, and get them to customers faster. Target opened the first of its mini Ulta Beauty spaces earlier this month. It recently launched an exclusive brand of pet food, Kindfull. It has a forthcoming designer apparel collection for the fall, and it partnered with children’s book illustrator and author Christian Robinson on a colorful line of home goods for kids.The company also said its board approved the repurchase of $15 billion of its own stock once it completes its prior stock buyback plan.Rival Walmart is also benefiting from higher consumer spending. It raised its forecast for the year on Tuesday, noting a bright beginning for back-to-school. That may not be the case for all retailers. Retail sales in July were worse than expected, raising new questions about whether the delta variant is starting to chill spending or if consumers are spending more money on services like airline tickets, concerts and restaurant meals and less on goods.At Target, Cornell said store traffic and spending patterns have not changed, despite rising Covid cases. He said consumers still seem “optimistic” and “resilient.””We’ll monitor it carefully, but right now, we’re not seeing any adjustment in consumer behavior through the new variant,” he said.Meantime, retailers are preparing for a strong holiday shopping season and trying to stay ahead of stock-outs.Target’s inventories were up $2.5 billion in its latest quarter compared with a year earlier. The company has been buying goods early — cognizant of port delays, heightened transportation costs and other shipping constraints that have sparked concerns that items could quickly sell out.”We’ll be ready for the holidays,” Cornell said in an interview with CNBC’s Becky Quick on “Squawk Box”. “We have a lot of inventory flowing our way right now.”—CNBC’s Lauren Thomas contributed to this report.