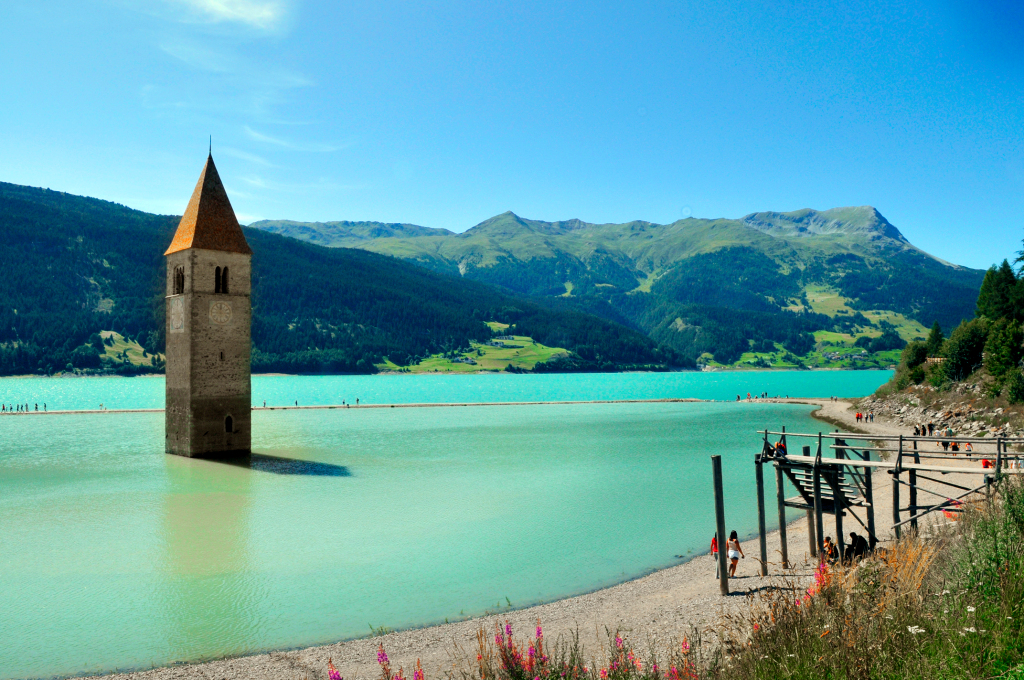 For over seventy years, a lone church tower rising from the middle of a lake seemed to be all that was left of the Italian village of Curon. This strange sight became popular among tourists seeking to create unusual Instagram posts, and even spawned the 2018 novel Resto Qui (I’m Staying Here) by Marco Balzano as well as the Netflix thriller Curon (2020).
The iconic 14th-century steeple was the only visible remnant of a village that once housed roughly 900 people. Curon had been part of Austria until 1919, so the residents, many of them unable to speak Italian, were ill-equipped to fight the plan to unite lakes Resia and Curon—two of three natural basins in the Resia Pass area of the southern Alps–thereby submerging their homes for the sake of producing hydroelectric energy. The construction of the dam was postponed by five years due to World War II; yet despite local efforts, Curon was eventually submerged in 1950. The village of Curon Ventosa, which overlooks the submerged town and today has about 2,500 residents, was formed after the original was lost.

In April, the missing town began to resurface as workers drained the lake to perform repairs on the hydroelectric plant. However, the exposed stone steps, walls, and arched cellars all went largely unnoticed, since tourist destinations were closed to visitors due to the global pandemic. There are only a couple weeks until Curon is resubmerged, as the power company that owns the dam slowly refills the lake.
Known as Lake Resia, or Reschensee in German, the former town’s location is close to the borders of both Austria and Switzerland. Photos and videos of the abandoned village have been popping up on social media, showing the ruins in their picturesque setting among the hills of South Tyrol. Winter will bring create another tourist draw. Legend says one can walk up to the tower on the frozen lake and still hear the church bells ringing—even though they were removed in 1950.