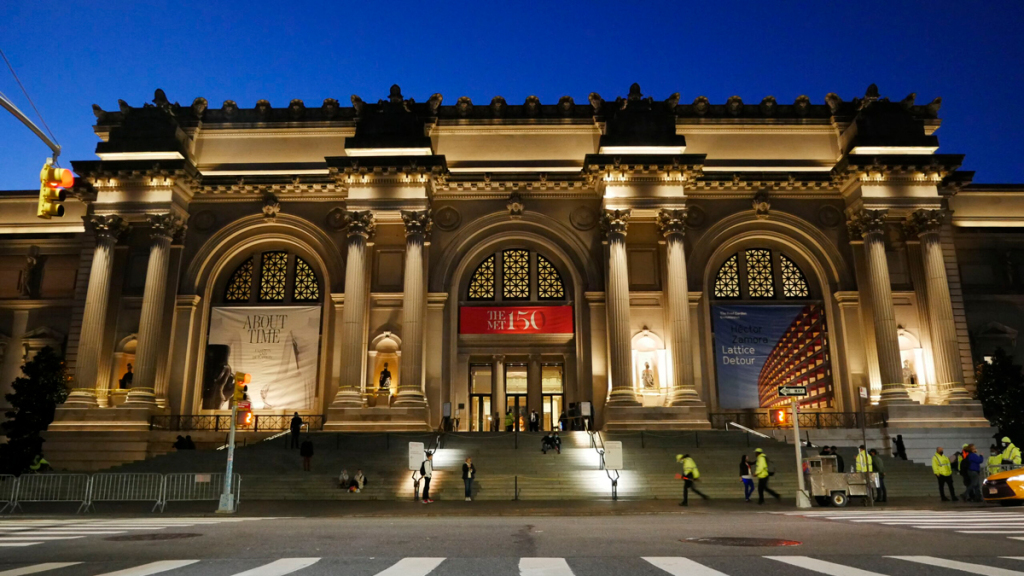 When the Metropolitan Museum of Art closed its doors at 4 p.m. on March 12, 2020, as the threat of the rapid spread of the coronavirus was becoming clear, it sent shockwaves throughout the country. Soon, museums across New York followed suit, and institutions across the U.S. began doing so as well as not long after. The museum made the decision to close just as it was beginning celebrations for its 150th anniversary. What should have been a joyous year turned into one punctuated by an immense loss of life, and a $150 million loss in revenue led to the museum lay off and furlough hundreds of workers. Calls for the museum to become a more equitable institution ensued.

Inside the Met, a new three-episode documentary by PBS that begins airing Friday, is meant to offer an inside look into the museum, charting how it has weathered the past 14 months. In its first episode, oddly titled “The Birthday Surprise,” we see how plans to host a lavish, year-long celebration of the Met were derailed. The titular surprise is not a gift or a donation, but the pandemic. Curators express disappointment that their shows were delayed and that few got to see a Gerhard Richter show shuttered after nine days. (The Richter show appeared at the Met Breuer, the museum’s short-lived contemporary art annex, which closed during the pandemic.) The mention of the hundreds of thousands of lives lost in the ensuing months comes as an afterthought. Looked at this way, Inside the Met is a myopic affair that centers an august museum amid a world-changing event.
Inside the Met goes on to cover the inner-workings of the institution and the people who oversee them, though it unfortunately never coalesces into a substantial whole in the process. Though it has access to the institution’s top brass, including director Max Hollein and president and CEO Dan Weiss, these figures don’t say anything that goes beyond familiar talking points. The film also never delves deep into the Met’s history, eliding key moments like the protests by Black artists over their exclusion from “Harlem on My Mind” in 1969 and the acquisition of Jackson Pollock’s 1950 masterpiece Autumn Rhythm (Number 30) in 1957.

Visitors to the Met walking through its Greek and Roman galleries.
Photo Eddie Knox/©2021 Oxford Films

Throughout, the documentary fails to grapple with the most pressing issues affecting art institutions today—namely, what has often been termed “toxic philanthropy,” or the potentially unsavory sources of the money it receives from the world’s wealthiest. The third episode, titled “Love and Money,” asks a question voiced by the show’s narrator, Crystal-Claire Simmonds: “In these dark times, does philanthropy still exist?” Similar queries have been posed by activists at protests at New York’s Whitney Museum and Museum of Modern Art, and even at the Met.

When it came to the Met, Nan Goldin’s P.A.I.N. group advocated for the removal of the Sackler family name from the museum’s walls, claiming keeping it there was helping uphold the family responsible for the opioid epidemic. But Inside the Met doesn’t even so much as mention P.A.I.N.’s actions, which generated international press when it staged a protest in the museum’s famed Temple of Dendur in 2018. Instead, the focus is donors who seem less troublesome—collectors who have gifted or promise to donate their collections to the Met, from couture to vintage guitars to Japanese bamboo art.
Inside the Met does better when it comes to exploring the intense labor of conservators, art handlers, and installers during the pandemic. It offers footage of conservators who spend months— even years, in some cases—restoring objects. They are indeed deeply devoted to these objects—whether it’s a massive medieval rug that needs to be rethreaded, a painting whose bright architectural background was painted over, a staircase in need of strengthening, or contemporary garments that are rapidly deteriorating. Herman Knuder, a conservator emeritus, says at one point,“All of these pieces have not only a history but people who are dedicated to care for them, but you don’t see them. The museum is an iceberg. You see the tip of an iceberg, when seven-eighths of it is underground.”

Based on the documentary, the conservation department doesn’t appear to be very diverse, but Inside the Met‘s brightest spots are its showcases for people of color who work elsewhere at the museum, like curators Andrea Myers Achi and Patricia Marroquin Norby. There’s also a powerful spotlight placed on the artists grappling with institutions, colonialism, and the othering of nonwhite peoples, and on the visitors who hope to see themselves better reflected in the Met’s galleries and programming.
The second episode, “All Things to All People?,” follows Tracy-Ann Samuel and her two young daughters as they visit the Met shortly after it reopened to the public last summer. In one sequence, they visit the American Wing and spend time looking at Emanuel Leutze’s iconic Washington Crossing the Delaware (1851). Samuel points out that no one in the painting looks like her and her family—it’s mostly white men depicted. The one Black man in the painting has his face cast in shadow, turned away from the viewer. “You see so many pictures of men winning,” Samuel observes.
Later, they return to the Great Hall, where they see two paintings, both of them commissioned by the Met, that reimagine Leutze’s painting by Kent Monkman, a Toronto-based Indigenous artist of Cree ancestry. Monkman, however, centers Indigenous people in these works. “My work really is refuting those themes of disappearance,” he says. “It was an opportunity to reflect on that colonial mindset that created these narratives in museums like the Met.”

The Met is undergoing some major shifts. These are happening within the museum’s programming, in presentations like Monkman’s, and an artist residency in which Miguel Luciano tries to make local communities of color feel more connected to the Met. They’re also taking place within the Met’s own staff, thanks to recent hires like Marroquin Norby, the Met’s first full-time Indigenous curator, and Denise Murell, whose scholarship has examined how Black people have been depicted throughout art history.
But even one of the museum’s top curators, Sheena Wagstaff, admits that these changes are late and long-overdue. “We have never, except probably at the founding of the museum, thought about the necessity to be relevant—directly relevant—to our local communities,” she says. “So this is actually a pretty amazing moment for us, but we just have to get it right. And we have to work damn hard to get it right.”
Another step in this direction is the Met’s paid internship program, which looks to foster the careers of the next generation of museum workers with a focus on providing these opportunities to people of color. One of these interns is Kevin Pham, who is shown working in the medieval department. In Inside the Met, he finally gets to visit the Met Cloisters—the museum’s annex for medieval art—for the first time. While looking at the treasures he has longed to see in person, he says, “My family—my parents, my grandparents—they never had the opportunities to go to museums to enjoy artwork, to understand art. That’s something that I’m fighting for, that a lot of my peers are fighting for to. We’re fighting to be in these places, not just as guests admiring the artwork, but doing this kind of work as well.”
As Inside the Met tells us at the beginning of each of its three episodes, the Metropolitan Museum of Art is “the largest art museum in the Americas, five floors high, four city blocks long … 2.3 million square feet of treasures.” It’s one of the most powerful art institutions in the world—but we shouldn’t take it for granted. We also have to question how the Met is serving those it had previously marginalized and what it’s doing to reckon with larger societal changes. Perhaps the museum’s chair of education, Heidi Holder, sums it up best: “We just did the first 150 years. I would hope the next 150 years would be completely different.”
Episodes 1 and 2 of Inside the Met will premiere on PBS beginning at 9 p.m. on Friday, May 21; Episode 3 will air on Friday, May 28 at 9 p.m.