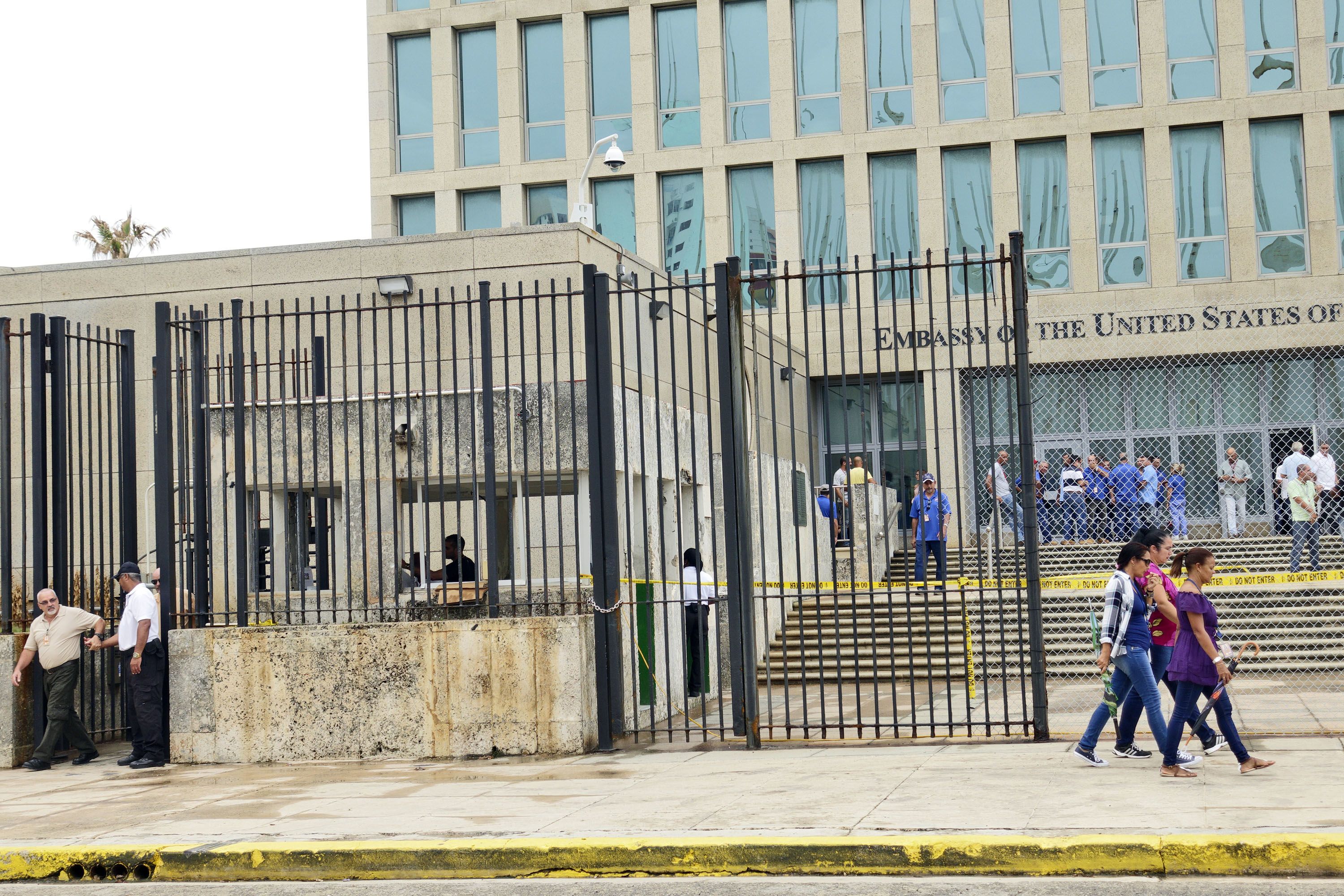 Personnel gather at the U.S. Embassy on September 29, 2017 in Havana, Cuba. The U.S. State Department announced it will cut the embassy’s staff by half in the wake of mysterious health problems that have injured over 20 people associated with the U.S. embassy and is currently being investigated by the FBI.

New research says there are “significant” differences in the brains of U.S. embassy staff members who endured mysterious attacks while serving in Havana, Cuba, between 2016 and 2018.

Compared with a healthy control group, advanced MRI testing revealed less white matter and fewer neural connections in the brains of the U.S. embassy staff members affected by the attacks, according to a study published Tuesday in the Journal of the American Medical Association.

The study evaluated 40 participants, 23 men and 17 women, from August 2017 to June 2018 at the University of Pennsylvania’s Center for Brain Injury and Repair. The affected group’s MRI imaging was then compared with that of 48 other healthy individuals who were similar in age, gender, race and ethnicity, education level and lifestyle.

“We found neurological dysfunction that could not be explained by head impact,” said Dr. Douglas H. Smith, director of the Center for Brain Injury and Repair and professor of neurosurgery at the Perelman School of Medicine.

Researchers used advanced neuroimaging to monitor how water molecules moved in the white matter of the brain. Smith explained that white matter is critical for processing signals in the brain and normal functioning. When it came to the patients affected in the mysterious attacks, Smith said the water molecules were moving in a different manner and direction than in the case of a concussion or other neurological issues.

They were “types of changes we’ve never seen before,” Smith said.

While researchers detected notable differences in the neuroimaging between the two groups, they said they were unable to directly link the patients’ symptoms to the attack.

Some U.S. embassy personnel serving in Cuba between 2016 and 2018 reported hearing a jarring sound, like “buzzing, grinding metal, piercing squeals, and humming” in their Havana homes and hotel rooms. Those affected recalled the sound as “directional, intensely loud, and with pure and sustained tonality.” The sounds ranged from quick 10-second pulses to 30 minutes long.

The U.S. has said 26 U.S. embassy workers and family members have been “medically confirmed” to have been affected.

After the Associated Press released a recording of the sound in October 2017, several scholars speculated the sound wasn’t a weapon at all. Quickly, the list of explanations grew to include crickets, microwaves and infections, though none of these claims was verified.

“This (study) is really important for the patients,” he said. “They felt like they were under attack and under attack again in the media.”

He said the study shows there are real neurological differences and brain imaging to support these findings.

He said future research should be done, including long-term follow-ups with the patients and comparisons with Canadians who were also affected in the attacks.

In September 2017, the U.S. State Department removed family and nonemergency personnel from the embassy in Havana. The next month, the department protested Cuba’s failure to address the attacks by demanding the removal of 15 Cuban officials from its embassy in Washington, D.C.

Cuba denied any involvement in the attacks.