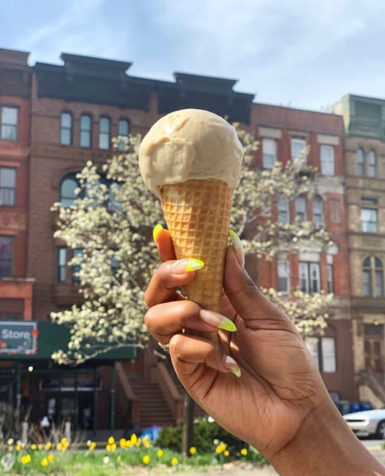 The Golden Chai atop a sugar cone.

In one of the biggest artist–ice cream crossovers since painter Philip Pearlstein shared his recipe for banana splits in the 2003 classic book The Artist’s Palate: Cooking with the World’s Greatest Artists, the Sugar Hill Creamery in New York is releasing a limited-edition flavor that’s been created by the Studio Museum in Harlem’s director, Thelma Golden.

The flavor is called Golden Chai and is made using tea from Harlem’s Serengeti Teas & Spices. A portion of the proceeds from the ice cream’s sales will go toward another neighborhood venture, Hot Bread Kitchen—“an amazing nonprofit social enterprise that creates economic opportunity through careers in food,” Golden said in a statement. Studio Museum members get 10 percent off, but note well: the flavor is available only through April 21, as part of the ice cream store’s “Harlem Flavor of the Week” series.

Sugar Hill Creamery is located at 184 Lenox Avenue, between West 119th and 120th Streets, just a few blocks from the Studio Museum, which is closed at the moment so that a hotly anticipated David Adjaye–designed expansion can be built. Even if a chai ice cream isn’t your thing, the creamery is well worth a visit—their ice cream is very delicious.

Other flavors on the menu at the moment are Chairman of the Board (a cream cheese–based ice cream with graham crackers and blueberry jam) and Bee’s Knees 2.0 (honey ice cream with lavender flowers). It sounds like either one would make for a great two-scoop situation with Golden Chai.