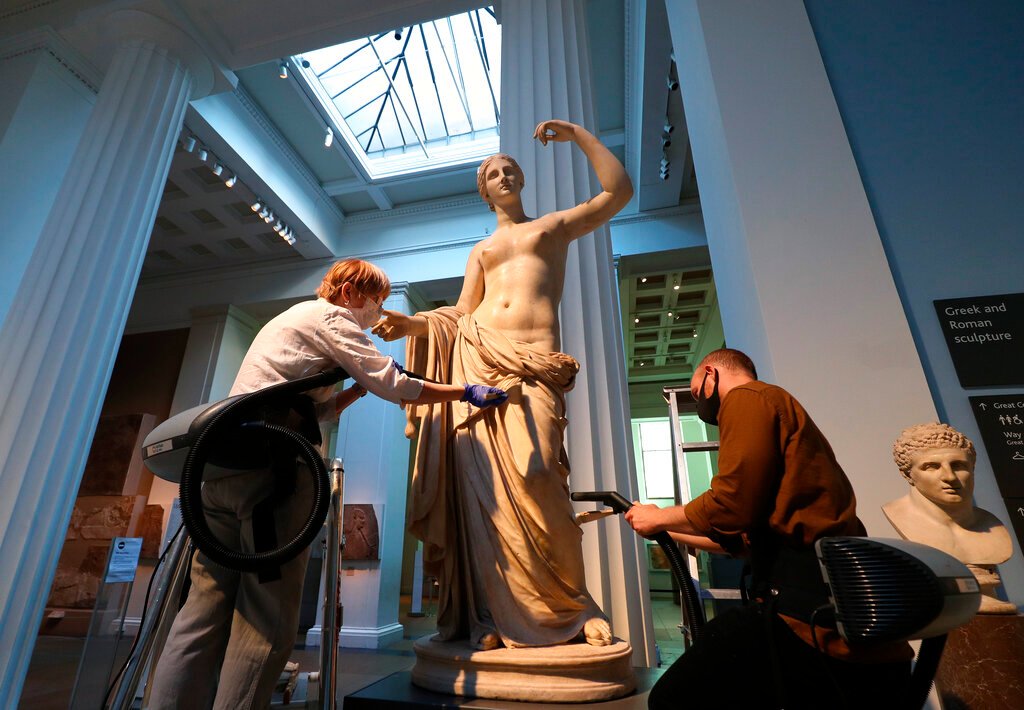 To receive Morning Links in your inbox every weekday, sign up for our Breakfast with ARTnews newsletter.
The Headlines
LAS VEGAS’S PICASSO RESTAURANT IS LOSING SOME OF ITS PICASSOS. ARTnews reports that MGM Resorts, which runs the tony eatery in the Bellagio hotel and casino, will sell 11 works by the artist. They could draw north of $100 million via Sotheby’s, which will handle the auction on-site on October 23. The sale is a bid by the resort to give “a greater voice to artists from under-represented communities” in its collection, an MGM exec said. If you love to pair a filet mignon and “symphony of vegetables” with a dose of Picasso when in Vegas, there is good news for you: MGM has more Picassos it plans to show at the resto. “In order for us to keep the name on the door, of course we have to showcase Picasso’s work,” the exec told Bloomberg. In other big-money Picasso news, Insider has pointed out that hedge-fund billionaire Ray Dalio has been offering some art-infused life coaching on Twitter. Urging his readers to “get rid of irrelevant details” in their work, he says that Picasso “could paint beautiful representational paintings from an early age, but he continually pared down and simplified as his career progressed.” Alright, sounds easy enough.

ONE OF THE ERA’S GREATEST ART EDUCATORS IS DEAD. Garry Neill Kennedy, the many-legended artist who made the Nova Scotia College of Art and Design a hotbed of cutting-edge art as its president from 1967 to 1990, passed away on Sunday at the age of 85, CBC reports. During his tenure, Kennedy brought a murderers’ row of talent to Halifax to be teachers or visiting artists, including Joseph Beuys, Dara Birnbaum, Gerhard Richter, and Lucy Lippard, and its NSCAD Press was run by curator Kasper König and then art historian Benjamin H.D. Buchloh. “I’m not sure they quite understood what they had gotten themselves into when they hired me,” Kennedy told Artforum in 2016, in a piece quoted by the Coast . “I mean, Color Field painting was, you know, far out in Halifax, let alone Conceptual art!” He charted his efforts at the school (now NSCAD University) in the 2012 volume The Last Art College.
The Digest
Rainfall in late July caused water to leak into some of the British Museum’s Greek galleries, delaying their reopening. The London institution is currently preparing a masterplan to renovate its exhibition spaces. [The Art Newspaper]

A report commissioned by the storied Salzburg Festival of music and drama about its logo shed new light on its little-known maker, artist Leopoldine Wojtek, “whose work took a conservative, Nazi-sympathetic turn in the 1930s, and who was married to one of the party’s most prolific art looters and schemers,” Joshua Baron writes. [The New York Times]
The architecture firm Reddymade and artist Ai Weiwei have collaborated on an addition to a home in upstate Salt Point, New York. Here are photographs—including one with a rainbow in the sky above the place! [Dezeen]
Christie’s is moving into a new section of the NFT market, becoming the first auction house to offer a sale of profile pic non fungible tokens—PFP NFTs, for short—which can be used as avatars on social media. [ARTnews]
Moderna Museet in Stockholm has a new curator of international contemporary art: Hendrik Folkerts, who has been curator of modern and contemporary art at the Art Institute of Chicago since 2017. [e-flux]
The Kicker
TWO QUICK UPDATES ON RECENT NEWSLETTER ITEMS—both in the United Kingdom, oddly enough. It is still not clear if Banksy made the eight Banksy-like works that have been popping up recently in East Anglia, but the BBC News reports that Great Yarmouth’s borough council has suggested that the pieces “may be an endorsement” of its joint application to become the 2025 U.K. City of Culture with East Suffolk. Anything is certainly possible… And that slice of cake from Prince Charles and Princess Diana’s wedding sold at auction for £1,850 (about $2,600), the Associated Press reports. The buyer, Gerry Layton, said he is a monarchist and that he plans to eventually sell or raffle off the 40-year-old confection for charity. Which is admirable, but after paying that kind of money, it seems crazy not to at least take a bite.
Thank you for reading. We’ll see you tomorrow.