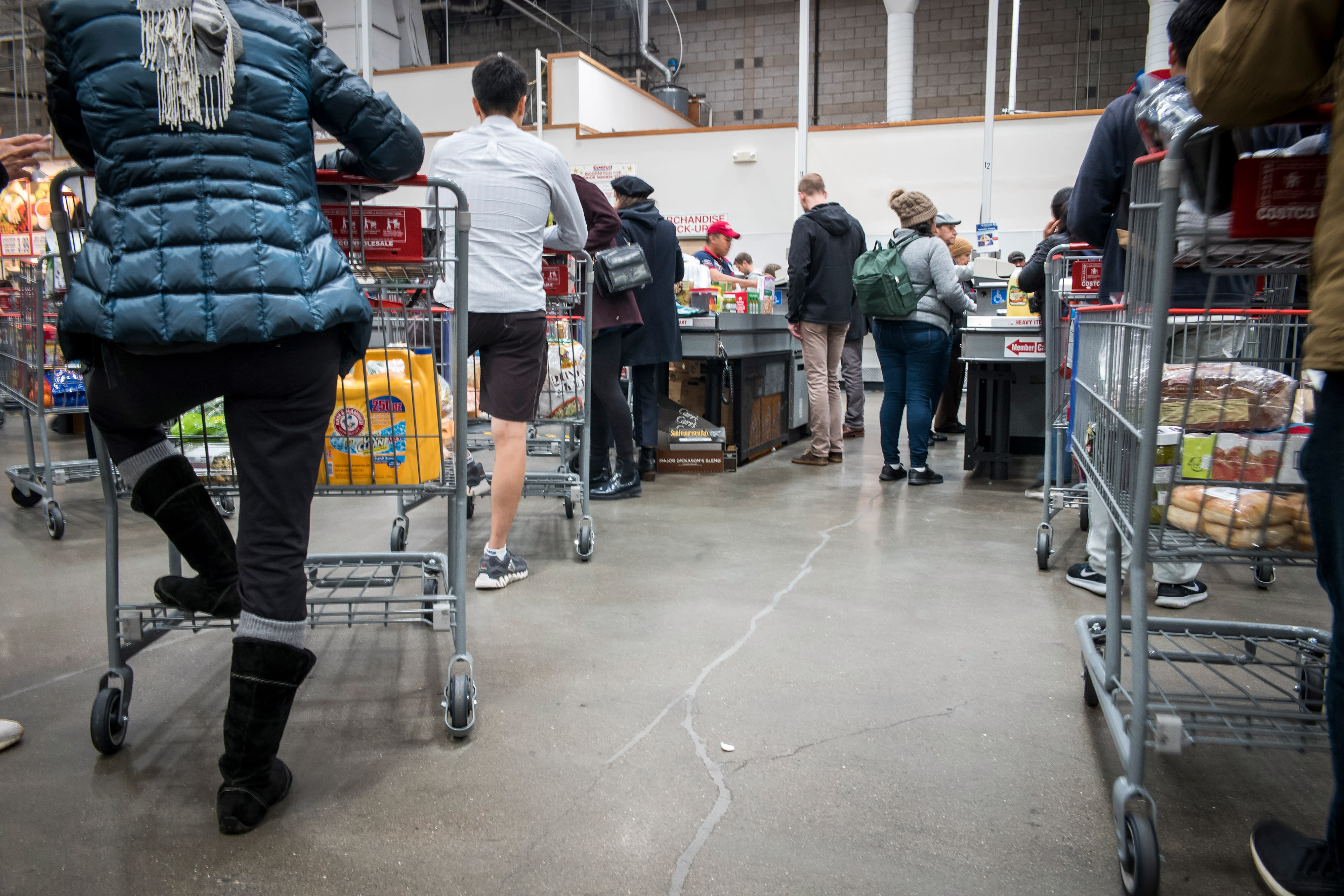 Customers wait in line to check-out at a Costco Wholesale Corp. store in San Francisco in December 2018.Bloomberg | Bloomberg | Getty ImagesCheck out the companies making headlines in midday trading:Microsoft – Shares of the technology giant rose 1.6% after the company announced a new $40 billion in share buybacks, as well as an 11% increase to its quarterly dividend. Microsoft’s quarterly dividend will increase by 5 cents, to an annual payout of $2.04 a share.Costco – Shares of Costco fell nearly 2% after Bernstein downgraded the wholesale retailer to underperform from market perform. The firm cited “membership exhaustion,” saying the subscription business model will be the first thing to slump in the case of an economic downturn. Bernstein said investors in Costco are overpaying for the quality of earnings, dividends and defensiveness.Denny’s – Shares of restaurant company Denny’s rose 1.7% after Oppenheimer initiated coverage of the stock with an outperform rating and a $27 price target. The firm said Denny’s rebranding strategy will create additional value for the diner-chain’s already healthy fundamentals.Darden Restaurants – Shares of Olive Garden’s parent company Darden Restaurants tumbled nearly 4% after it reporting slower-than-expected sales growth for its first-quarter earnings. Revenue came in at $2.134 billion, missing analysts’ estimates of $2.138 billion, according to FactSet. Same-store sales rose 0.9%, while Wall Street forecast growth of 1.3%.KKR & Co – Shares of the private equity firm rose 4.5% after Goldman Sachs added KKR to its “conviction list” of stocks, according to StreetAccount. Goldman sees KKR as an undervalued stock with accelerating earnings set to come as a result of its new fundraising and its strengthened investment portfolio.U.S. Steel — Shares of U.S. Steel dropped 11.4% after the company cut its third quarter earnings guidance far below Wall Street’s expectation. The steelmaker now expects a quarterly loss of 35 cents a share, below the 10 cents a share loss that analysts expected according to FactSet. U.S. Steel noted steel prices are dropping overall, with market conditions in Europe especially deteriorating. Overstock.com – Shares of internet retailer Overstock fell 1.8% after former CEO Patrick Byrne, in a cryptic message on his personal website, disclosed that he had sold all 3.7 million shares of his stake in the company. Among a number of reasons, Byrne blamed the “deep state” for pushing him out of Overstock and forcing the sale.DaVita –  The kidney dialysis company’s stock dropped 2.5% after short seller Jim Chanos revealed he has been betting against the stock for years, saying he thinks DaVita “is running an insurance scam.” Chanos, noting a lawsuit against DaVita from health insurance provider Blue Cross of Florida, said “it’s always interesting in my world when one of your biggest customers is suing you for fraud.”– CNBC’s Maggie Fitzgerald contributed to this report.

Tesla is going to have to raise $2.5 billion in capital