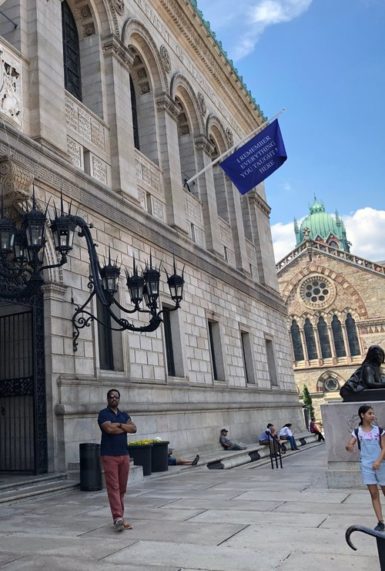 The artist Steve Locke is withdrawing a plan to install a memorial slave-auction block at the historic Faneuil Hall marketplace in Boston, citing the NAACP’s opposition to the public-art project.

The work was to have been located outside Faneuil Hall, where slave auctions were held in Boston before the state abolished slavery in 1783.

Mayor Martin J. Walsh told ARTnews in a written statement, “I thought Steve’s proposal was thoughtful and an important telling of a history that must have more visibility. I was hopeful that a public process would have allowed Steve to provide that context.”

ARTnews has reached out to NAACP’s Boston branch. This post will be updated when we hear back.

Locke had raised $45,000 in crowd-sourced funding towards the $150,000 he planned to raise for the sculpture, Auction Block Memorial, which had previously received support from Boston Mayor Martin J. Walsh. The city had been set to match that $150,000 through its Browne Fund for public art.

The Boston-based artist began work on the project earlier this year, as a resident with BostonAIR, the city’s public art residency program, and said that he wanted to draw attention to the role played by Faneuil Hall in the slave trade, and Peter Faneuil’s involvement in it as its proprietor. “What’s not present at Faneuil Hall is any indication of where his money came from,” he told ARTnews in an interview on Tuesday. “There’s no conversation about enslavement, the trading of people, none of that is present . . . which is what my project proposed to do.”

In the email Locke received from the NAACP in Boston, the branch’s president, Tanisha M. Sullivan, wrote, “I want to be clear that the work we do every day through the NAACP Boston Branch is centered on uplifting and advancing communities of color, with a focus on the Black community in the City of Boston.” She continued, “It is for that reason that we object to the installation of a slave auction block memorial in front of Faneuil Hall and have made those objections known.”

Locke said that he wants to install the piece elsewhere on the East Coast at a site also marked by the slave trade. He wrote on his Kickstarter that interest has come from people at sites in Salem, Massachusetts, New York, and Providence, Rhode Island.

Locke said that he believes that the NAACP’s opposition is at least partly because one of its staffers is involved in New Democracy Coalition, a nonprofit that has opposed the memorial and called for Faneuil Hall to be renamed. However, Sullivan said in an email to Locke that the NAACP is not involved in that effort.

Prior to his withdrawal of the project, Locke had also received letters of support for Auction Block Memorial from the Freedom Trail Project, the National Park Service, and the Boston Landmarks Commission.

Locke has shown widely internationally, and had a solo exhibition at the Institute of Contemporary Art in Boston back in 2013, curated by Helen Molesworth. His most recent public art piece placed three abstracted, monochrome images from the media coverage of Freddie Gray’s death while in police custody in Baltimore in 2015, acting as a public site for mourning his death. Titled Three Deliberate Grays for Freddie (A Memorial for Freddie Gray), 2018, the piece was installed outside of the Isabella Stewart Gardner Museum in Boston from June of 2018 through this past January.

“I’m an internationally-known artist who has proposed an object for a city that comes right out of the city’s public art incubator program,” he told ARTnews. “The NAACP has no idea who I am. They just think this is the mayor’s project.”