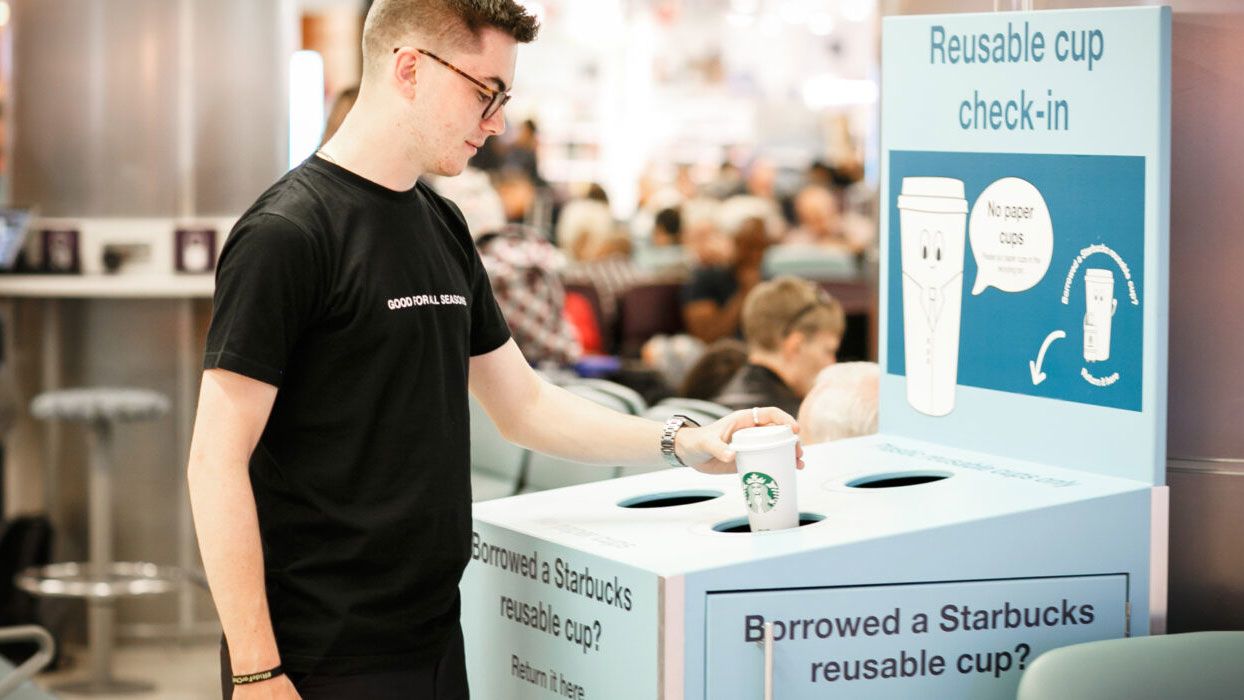 Starbucks has launched a month-long trial of a reusable cup program at London’s Gatwick Airport.

Customers at its South Terminal location will be able to either request a free reusable cup or pay 5 pence (6 cents) for a paper cup. If customers opt for the reusable cup, they will be able to drop it off at five locations throughout the terminal before boarding their flights, the coffee giant announced in a press release Sunday.

Last year, Starbucks implemented a paper cup fee at all of its U.K.cafes. The proceeds from this charge have been donated to the U.K. environmental charity Hubbub, which is funding the reusable cup trial and other environmental projects.

About 7 million paper cups are used at the airport annually, of which about 5.3 million are recycled. Through the new program, about 2,000 reusable cups will be in use at the terminal

“The purpose of working with Hubbub and Gatwick is to help create a new culture of reuse on-the-go by giving customers the option of a reusable cup instead of paper for free,” said Jaz Rabadia, Starbucks U.K. senior manager of energy and sustainability, in a statement. “Our goal is to save 7,000 disposable cups over the course of the month to find out the best ways to drive reuse where it is typically harder to do so – such as airports.”

To hit this goal, 250 customers would have to request reusable cups each day.

Gatwick employees will collect the cups from the drop-off points, wash them, and return them to Starbucks for reuse.

Hubbub CEO Trewin Restorick said an airport is an ideal environment for this trial because it is a closed environment and generally puts out high amounts of paper waste. There are also plans to pursue additional programs.

“What we learn here will provide valuable insight into how to deploy a reusable trial in not only other airports but many other environments,” he said in the press release. “The ambition behind the trial is to help create a new culture of reuse on-the-go and explore how customers respond to dropping their cups back off to be washed and used again.”