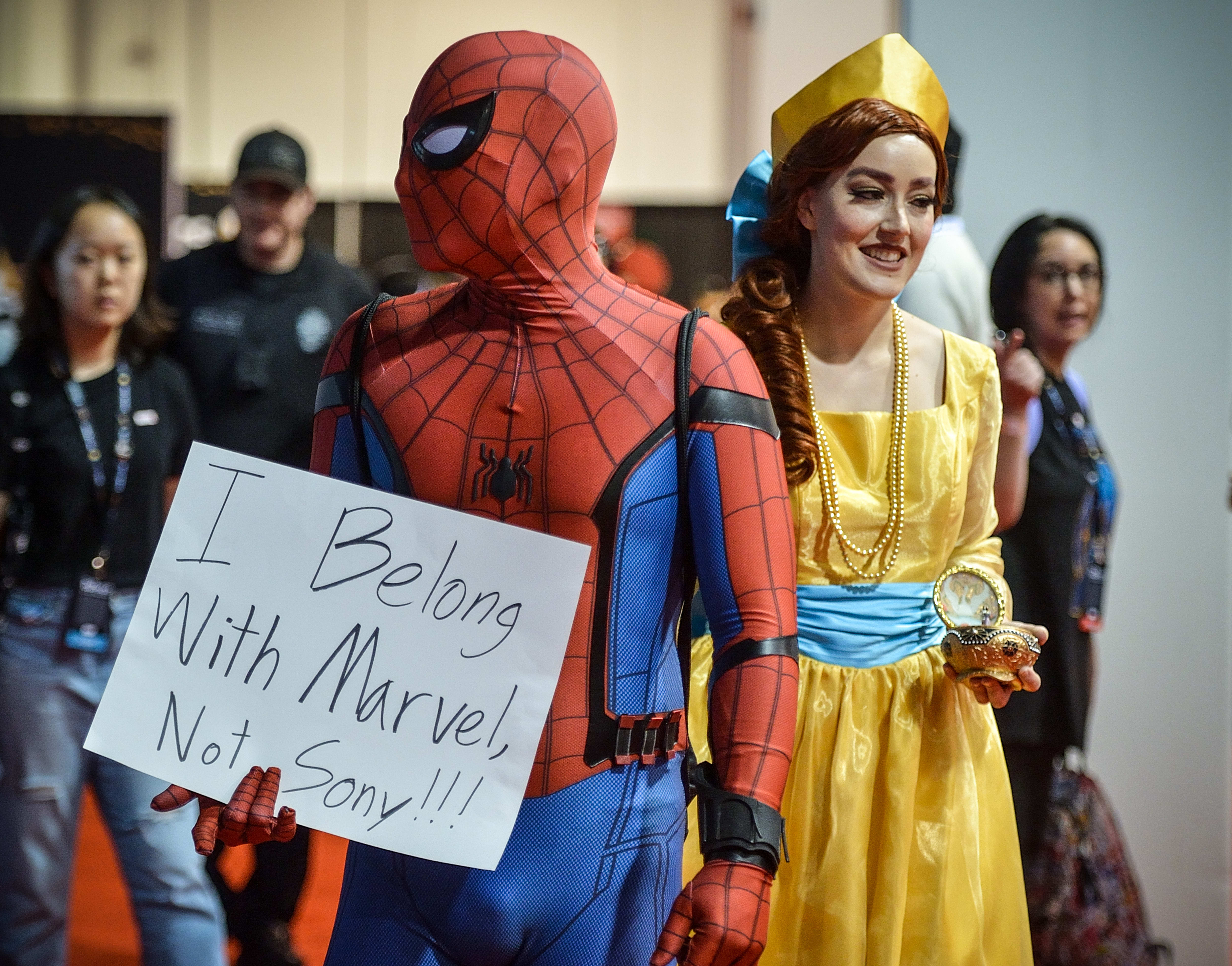 Dane Collaro, dressed as Spider-Man, shows his displeasure with the Sony/Disney spat over the web slinger, as he walks through the D23 Expo with his girlfriend Lauren Wood, dressed as Anastasia, in Anaheim, CA, on Friday, Aug 23, 2019.

With great power, comes great responsibility. It’s an old Spider-Man adage that Sony should be familiar with by now.

Fans of the webslinger have taken umbrage with recent remarks from the studio’s CEO who, while explaining how capable his production team would be in handling Spider-Man going forward, took a dig at Marvel head Kevin Feige.

“We had a great run with [Feige] on Spider-Man movies,” Tony Vinciquerra, Sony Pictures’ chairman and CEO, said Thursday at Variety’s Entertainment and Technology Summit. “We tried to see if there’s a way to work it out. … The Marvel people are terrific people, we have great respect for them, but on the other hand, we have some pretty terrific people of our own. Kevin didn’t do all the work.”

He also once again touted that Feige was “stretched incredibly thin” with the new Marvel characters acquired in the Disney-Fox merger earlier this year.

However, fans were quick to poke holes in Vinciquerra’s comments.

Sony did not immediately respond to CNBC’s request for comment.

“The emotions are running very high, particularly with the fans, and words matter very much,” Paul Dergarabedian, senior media analyst at Comscore, said. “Things have been pretty civil and that comment was aimed at their own team. Not sure it was so much a dig, although it comes off that way.”

Of course, in the partnership between Sony and Disney’s Marvel, Feige was not responsible for all of success of Spider-Man, but he was a pretty big part of it. Feige helped lay the groundwork on 23 interconnected feature films and has more than a dozen projects in the works, none of which is tied to Fox’s collection of Marvel characters.

Fans were already upset about the possibility of Spider-Man leaving the Marvel Cinematic Universe, so these additional comments from Sony just added more fuel to the fire. Not to mention, Marvel fans have become fiercely protective of Feige over the last decade, as he has orchestrated the most lucrative and beloved franchises in cinematic history.

“The proper respect must be paid to Kevin Feige,” Dergarabadian said. “What Feige brought to the table, you can’t put a price tag to that. His contribution to Spider-Man was absolutely valuable.”

Feige and Disney have remained mum about the divorce with Sony and did not immediately respond to CNBC’s request for comment.

“I’m feeling about Spider-Man gratitude and joy. We got to make five films within the MCU with Spider-Man: two standalone films and three with the Avengers. It was a dream that I never thought would happen. It was never meant to last forever. We knew there was a finite amount of time that we’d be able to do this, and we told the story we wanted to tell, and I’ll always be thankful for that.”

The biggest hurdle Sony faces is earning back fan trust. While audiences embraced the studio’s “Spider-Man into the Spider-Verse” animated feature, Sony’s track record with Spider-Man has been bumpy, at best.

The first two installments of the Sam Raimi-directed Spider-Man films in the early ’00s were heralded as films that redefined the superhero genre. However, between the “Spider-Man 3” and the two “Amazing Spider-Man” films, Sony has struggled.

“The Amazing Spider-Man,” released in 2012 earned a 72% Rotten Tomatoes score and its sequel garnered a 52%. While both films tallied more than $700 million in global box office sales, the U.S. performance was lackluster. Each took in over $200 million domestically.

Many said Sony had done a good job with casting, bringing in Andrew Garfield, Emma Stone and Sally Field, but the films didn’t live up to Raimi’s Spider-Man trilogy. It also retread through Peter Parker’s origin story, something moviegoers had already seen.

There also was an overabundance of villains. Sony was so eager to show off its IP that it introduced three different, unconnected villains in 2014’s “The Amazing Spider-Man 2.” The plot was messy and unfocused and spent too much time trying to set up future installments without investing in the movie fans were watching.

A still from ‘The Amazing Spider-Man 2’.

For comparison, “Spider-Man: Homecoming,” which was released in a joint venture between Disney and Sony in 2017, earned a 92% on Rotten Tomatoes and $880 million globally, nearly $350 million of which came from the U.S.

“Far From Home,” which hit theaters in July, is now Sony’s highest-grossing film of all time, with a box office haul of just over $1.1 billion. Some suggest that Sony wouldn’t have been able to achieve this feat without the help of Marvel.

Marvel skipped Peter’s origin story, only briefly alluding to the death of Uncle Ben, and let a youthful Holland breathe in the role. In “Captain America: Civil War,” Peter is eager, awkward and jovial. That personality carried through to his two solo films as well as his appearances in “Infinity War” and “Endgame.”

This version of Spider-Man has quickly become the favorite interpretation of Peter Parker, which is one of the reasons fans are so disappointed with his departure from the MCU. It’s also led a lot of fans to post on social media that they will boycott future standalone Spider-Man films from Sony. Although, it’s unclear how legitimate those threats are.

As Sony moves forward with its own Spider-Man films, and perhaps a handful of Spider-Man TV shows, it will have to somehow deal with the fact that it can no longer be affiliated with Marvel Studios or its plot lines.

That means no references to Tony Stark, no relationship between Aunt May and Happy and no Avengers tie-ins. Sony will essentially have to create a completely different Spider-Man and a new Spider-suit.

Fans have bemoaned a possible reboot of the franchise that would retread over old story lines from previous Spider-Man movies. (Yes, the death of Uncle Ben.) Equally worrisome is a complete departure from the Spider-Man they’ve grown to love since he first swung into “Captain America: Civil War.”

“The biggest issue with those two movies is they cannot use any existing MCU story,” Erik Davis, managing editor at Fandango, wrote on Twitter last month. “So, can Peter even reference Tony Stark in the next movie? Can they still set it 5 years post-snap? Can they follow through on that end-credits scene? You have Holland, but what else?”

In the previous standalone features “Spider-Man: Homecoming” and “Spider-Man: Far From Home,” Peter Parker wasn’t actually the sole hero in the movie. In “Homecoming” he was heavily accompanied by Tony Stark and in “Far From Home” much of the plot was pushed along by Nick Fury.

Even the villains were tied more towards the previous Marvel films than from Sony’s lexicon of Spider-Man villains. Both Vulture (Adrian Toomes) and Mysterio (Quentin Beck) were disgruntled with Tony Stark and fueled into a life of crime because of events in other MCU films.

Sony could tie Spider-Man into its “Venom” films, but he was so absent from “Venom” that it would likely be awkward to shoehorn Peter Parker into that universe after making such an effort to keep him out of it.

“Maybe the smartest thing for Sony is to just get away from Peter Parker completely,” Shawn Robbins, chief analyst at Boxoffice.com, said.

The character has been associated with three actors in the last 20 years and has become so fundamentally tied to the Marvel Cinematic Universe that looking for other iterations of Spider-Man could be a better option for Sony, Robbins said.

Fans have been clamoring for more content featuring Miles Morales and Spider-Gwen since before “Into the Spider-verse” was released last year.

Still, future films could arrive with a tarnished reaction from Spider-Man fans. While time could be a salve for Sony, comic book fans are not terribly forgiving.

“Even if Sony is completely right and has the best idea for a Spider-Man movie, you don’t say that, it’s not professional,” Robbins said. “There’s no reason to upset your fan base.”

Apple Card arbitration agreement: How to opt out

I think Trump has learned his lesson after market volatility, says Art Cashin

Expect the unexpected from both Powell and Trump