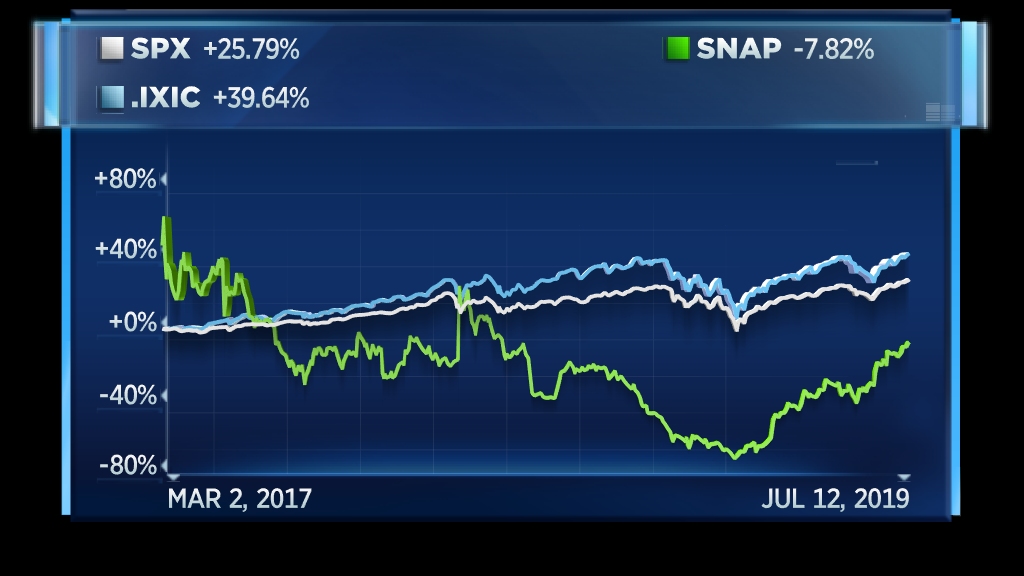 Evan Spiegel, co-founder and chief executive officer of Snap Inc., stands on the floor of the New York Stock Exchange during the company’s initial public offering on Thursday, March 2, 2017.

After a rough two years following its IPO, Snap is trading within shouting distance of its $17 debut price from March 2017.

While hardly cause for celebration, considering a generic bet on the S&P 500 would’ve returned 25% during that same period, it’s quite a turnaround for a company that spent the bulk of last year in free fall, as users fled the Snapchat app and losses mounted.

Snap has since abandoned its effort to cater to everybody, and renewed its focus on young users, which remain a strength for the company and an area where it has a clear advantage over rival Facebook. Advertisers are finding more ways to reach those users and now have better tools to track their campaigns.

Investors are rewarding the company in a big way.

“We believe product improvements and feature additions are driving positive trends in user growth and engagement that, along with monetization improvement from ad tech initiatives, should drive upside to consensus estimates,” wrote Goldman Sachs analysts, in a note to clients on Friday. They raised their rating to buy from neutral and boosted their 12-month price target to $18 from $13.

Other investment banks have made similar moves. Bank of America on Thursday raised its price target for Snap to $17 from $12, and last month BTIG increased its share price prediction to $20 from $15.

“It feels different, it feels good, it feels grown up but still authentic to them,” said Travis Freeman, executive vice president of media for ad agency VaynerMedia, an advertising agency. “It’s good vibes.”

Freeman said his agency boosted spending on Snap by about 20% in the first half of the year from the same period in 2018.

Snap still faces massive challenges. It’s losing hundreds of millions of dollars a quarter, including $310 million in the latest period, as it pumps money into research and development, while fellow consumer internet companies Google and Facebook have some of the fattest profit margins on the planet. Analysts are projecting substantial losses in the coming quarters.

Even after the stock’s huge rally this year, its remains 8% below the IPO price from 2017.

But optimism about Snap’s future is unquestionably on the rise, and much of that is attributable to CEO Evan Spiegel’s renewed focus on serving its core audience: the youth. Back in November 2017, Spiegel called out the company’s need to gain adoption with users 34 and older. That plan didn’t work, and Snap saw its user growth begin to shrink from 191 million daily active users in May 2018 to 186 million in October.

Snapchat, with its silly features for editing and enhancing photos, has always been better suited for younger users, and the company has come to grips with that. Within the U.S., Snapchat can reach between 30 million and 31.2 million users ages 18 to 24, according to the company’s ads manager tool. By comparison, Facebook’s reach among the same demographic is between 25 million and 30 million users, according to its Audience Insights tool.

Snap’s reach expands further for advertisers who want to target even younger users. According to its ads manager tool, Snap can reach 48.4 million U.S. users between the ages of 13 and 24.

“There is no questioning the fact that, in Gen Z, Snapchat has an incredibly strong, dominant footprint,” said Meghan Myszkowski, vice president of social activation for Essence, an advertising agency. “If advertisers want to reach Gen Z, they have to have Snap as a part of their mix.”

Those younger users typically don’t have the purchasing power of older consumers who are more commonly in the workforce. While that limits Snap’s average revenue per user, advertisers are recognizing the importance of getting the youth familiar with their brands, said Carter Henderson, portfolio specialist for Fort Pitt Capital Group, which oversees $2.5 billion in assets.

“The demographics Snap attracts will be the price setters of the future and investors are paying for this future growth,” said Henderson.

Advertisers are particularly excited about Snap’s AR technology, which has led to improved engagement with users by letting them have fun with selfies and group photos. In 2019, Snap replicated the past success of its puppy face and rainbow lenses with a gender swap lens that showed users what they’d look like as a person of the opposite sex and a baby face lens that showed them as babies.

Facebook mimicked Snapchat, adding AR lenses to its Stories feature and on Instagram, but Snap’s filters and enhancements have gone more viral.

“The gender swap filter got a lot of attention and really took off,” said Noah Mallin, managing partner of media agency Wavemaker. “That’s a good sign of health that people are actively using the platform, and it points to one of the strengths Snap has: they’re still the leader when it comes to AR.”

Brands have also used Snap’s AR technology to promote their products. In April, HBO teamed up with Snap to create a lens that allowed users to see one of the dragons from “Game of Thrones” land on the Flatiron Building in New York.

And in June, Gatorade worked with Snapchat to create an AR experience built around the company’s “Every Day is Your Day” short film. The effort was part of Gatorade’s video-everywhere marketing strategy, which has lifted its digital ad spend to 46% of the total media budget, up from 35% in 2018. The bulk of that spending is going to advertising on Instagram, YouTube and Snapchat, the company said.

“As a partner, Snapchat is always pushing boundaries to reach audiences in new and innovative ways,” said Jill Abbott, Gatorade’s head of consumer and athlete engagement, in an email.

Maturing as a company

Snap has also ramped up its offerings for direct response advertising and given marketers more tools to measure the success of their campaigns and justify their ad spends.

The company overhauled its sales teams, bringing in people with more industry experience. In March, Twitter veteran David Roter joined as vice president of global agency partnerships, a move that improved the company’s relationship with brands and advertisers, Mallin said.

“When you bring on people who have that kind of experience, know how to grow a platform and punch above its weight, that’s a good thing,” he said.

Snap will have to show that its recent growth metrics weren’t a fluke when it releases quarterly results on July 23. The market is still tough, with competition from Facebook (and Instagram), Twitter and TikTok. In addition to showing growth, investors need to see that the company is at least headed in the direction of creating a long-term sustainable business.

“My concern is that this type of momentum isn’t something that Snap or its investors can count on quarter over quarter,” Newman said.