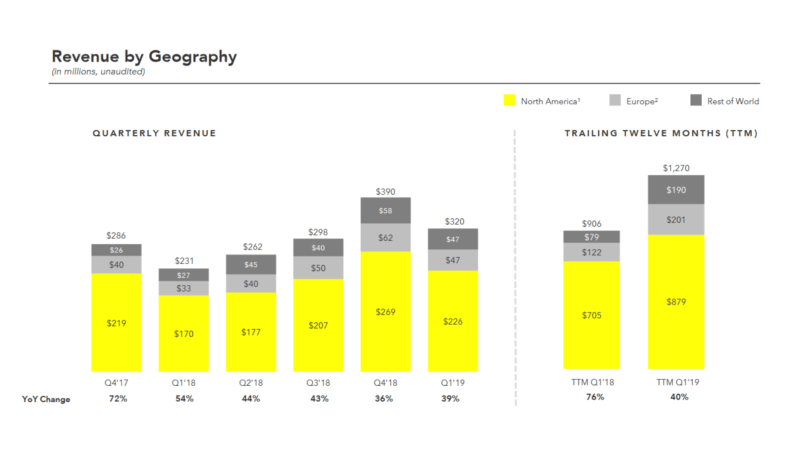 Snap remains focused on Ads Manager. Snap didn’t share details around its advertising gains, but the year-over-year jump in revenue confirms advertisers are showing up. The company has focused on updating its self-serve Ads Manager with features like target cost bidding, bulk uploading capabilities and bulk editing and cloning capabilities. Snap also expanded its location targeting to the UK, Canada and France.

The company highlighted a recent Toyota Corolla campaign using the platform’s Commercials ad unit and AR features that resulted in users watching more than 90 percent of the ads on average and engaging with Toyota’s branded Lenses for more than 10-seconds on average.

Snapchat DAUs finally coming around. After launching a redesign near the end of 2017 that greatly impacted its Android users and resulted in a slow loss of DAUs throughout 2018, Snapchat appears to have found its footing. The company’s global DAUs lifted from 186 million in the last quarter of 2018 to 190 million last quarter. This is still a million less than the 191 million it reported during the first quarter of 2018, but it shows Snapchat may finally have recovered from the gradual declines in DAUs it suffered last year.

Discover partners seeing strong returns. Snap reported nearly half of its daily Discover viewers watch content on the platform every day of the week, and that its Discover partners (publishers producing shows housed on the Discover section of the app) have increased their mobile monthly audiences in the U.S. by an average of more than 30% during the last six months, according to ComScore’s data.

The company is continuing to build out Discover content for audiences and currently has over 450 premium channels worldwide. It also launched more than 50 new shows and Publisher Stories globally since January, 2019.

Why we should care. Snapchat’s investments in its ad platform and ability to retain and grow its user base could make it more attractive to advertisers looking to reach a younger demographic.

Snapchat is also expanding its Reach and Frequency campaign objective that allows media buyers plan and buy upfront. Available for Lenses and Snap Ads, the product now allows for one-day buys, instead of a minimum of three, and recently expanded to the U.K., Canada and France.