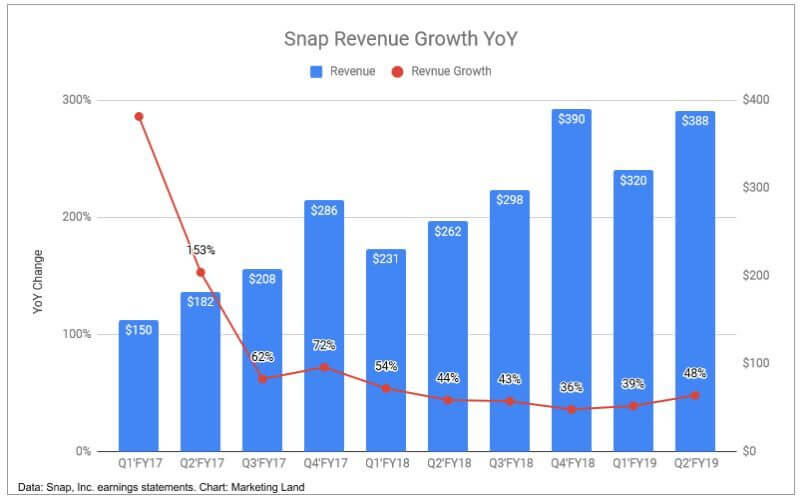 Snap, the company behind Snapchat, reported a 48% year-over-year increase in revenue for the second quarter of 2019, reaching $388 million. That’s just shy of the $390 million it generated in the fourth quarter of last year, which enjoyed the benefis of the holiday season.

DAUs passed the 200 million mark. Of the 203 million total DAUs on Snapchat, 83 million are in North America. Snap reported that 7 to 9 million of the 13 million new DAUs can be accounted to the higher user engagement with its new AR Lenses. The new AR Lenses “brought in new users and re-engaged lapsed users,” the company’s CFO Derek Andersen said. Snap reported it saw more engagement with Lenses created by users during the second quarter than all of 2018. 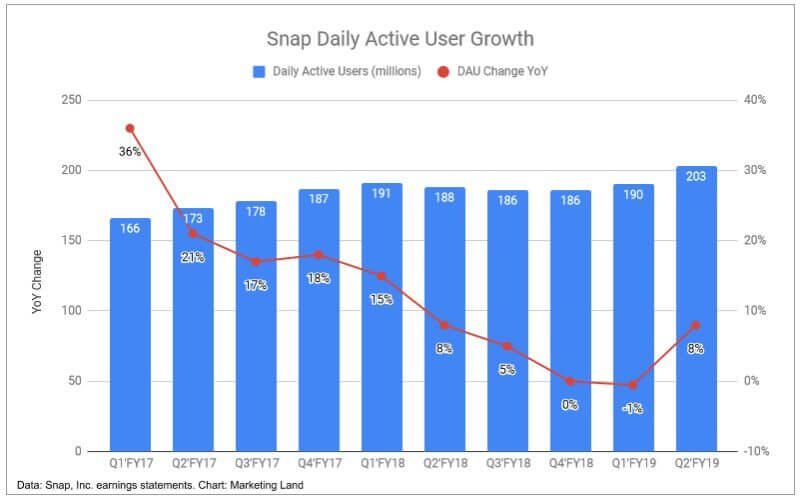 Snap’s ad business driving revenue. Snap showed more evidence it has found its footing after a difficult 2018. Not counting the holiday push during the fourth quarter of last year.

“Over the past few years, we have built a large and unique audience, created effective and engaging mobile ad units, and migrated to a self-serve monetization platform,” said CEO Evan Spiegel in prepared statements, “We’re now working on scaling demand on our platform by helping advertisers of all types and sizes generate returns on their ad spend.”

Spiegel said the enhancements Snap has made to its self-serve ad platform has helped increase ad engagement and revenue growth. Last quarter, the company launched Snap Select, giving advertisers access to premium video inventory with the ability to reserve inventory at a fixed CPM via its Ads Manager. It also introduced a proposal feature for media buyers to review and approve Snap Select plans.

Snap’s Android problem on the mend. A year and a half ago, Snapchat began rolling out a major redesign that resulted in a loss in revenue during the fourth quarter of 2017, according to Speigel, and impacted its Android users.

The company said Tuesday it is seeing early results from improvements made to its Android app, with the majority of Android users now sending 7% more Snaps compared to users on the previous version of its Android app. It also reported a 10% increase in the retention rate for first-time users on Android.

Why we should care. As part of the company’s prepared statements, Spiegel reported 75% of the 13- to 34-year-old population is currently active on Snapchat. “Making us larger than services like Facebook and Instagram among this audience, and demonstrating the broad-based appeal of our service,” said Spiegel, highlighting how Snap is positioning itself against the likes of Facebook and Instagram.

The data is a reiteration of statistics Snap shared at the beginning of second quarter, when it also reported it reached 90% of 13- to 24-year-olds. This is an impressive reach for advertisers that aim to connect with younger audiences. Now that Snapchat appears to have overcome the challenges caused by its redesign during 2017 and 2018, the company is moving swiftly on its ad initiatives.

It is also delivering more video content — specifically within its Discover platform. On Tuesday, Snap reported viewership on Discover grew 35% year-over-year, with the daily time spent watching Discover up over 60% year-over-year.

Prime Day halo effect and 6 other trends to watch for back-to-school search marketing
5 ways to grow ABM performance by moving beyond your basic persona framework
To Top
error: Content is protected !!