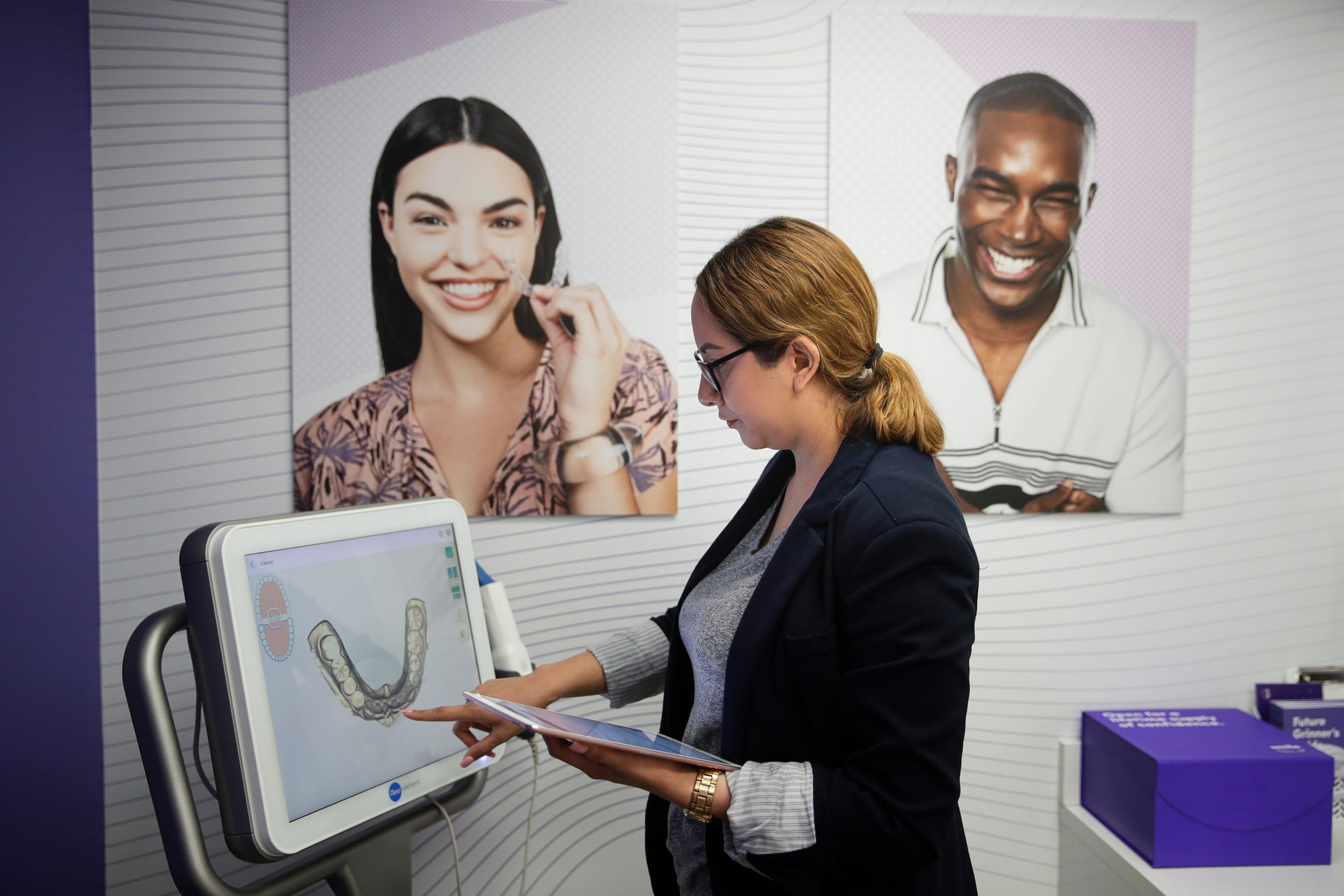 Dental assistant Jessica Buendia looks at a scanned image of patient’s teeth in SmileDirectClub’s SmileShop located inside a CVS store Wednesday, April 24, 2019, in Downey, Calif. CVS Health is venturing into dental care with plans to offer the relatively new teeth-straightening service.Jae C. Hong | APOnline dentistry company SmileDirectClub priced its IPO at $23 per share, topping the company’s initial projections, according to a person familiar with the offering.The offering raises $1.3 billion and values the online dentistry company at $8.9 billion. SmileDirectClub sold 58.5 million shares, the same as it had originally projected. The start-up, founded in 2014, sells teeth aligners directly to consumers on its website and in its “SmileShops” starting at $1,895 for a two-year plan. Founders Alex Fenkell and Jordan Katzman want to disrupt the orthodontics industry with less expensive teeth-straightening treatments, convenience, and splashy television and social media advertisements.The company reported $423.2 million in sales last year, a 190% increase from the $146 million it reported in 2017, according to its prospectus filed last month. It posted a net loss of $74.8 million last year, more than double the net loss of $32.78 in 2017.Acquiring new customers is expensive. SmileDirectClub spent $289.3 million on marketing and general expenses last year.SmileDirectClub originally projected it would price its shares at between $19 and $22 each. The company plans to start trading Thursday on the Nasdaq under the ticker “SDC.”Jordan Katzman’s father, David Katzman, funded SmileDirectClub’s seed round through his venture fund, Camelot Venture Group, and is the company’s CEO. Camelot invests in direct-to-consumer brands, such as 1-800-Contacts and Quicken Loans.David Katzman’s brother, Steven Katzman, is the chief operating officer. The Katzman family, combined, will retain more than 65% of the voting power between the three men after the offering. CEO David Katzman alone will hold nearly 30% of the vote with 87 million Class B shares, which control 10 votes for every 1 vote offered to a Class A share.SmileDirectClub operates more than 300 locations, according to its initial prospectus filing. It has also signed partnerships with Walgreens and CVS to open “SmileShops” inside their drugstores.Customers can visit a SmileShop to have someone scan their teeth and create a 3D image, which SmileDirectClub then uses to build a custom aligner. They can also order a kit online and send back an impression.The Nashville, Tennessee-based company plans to use the proceeds from its IPO to fund international expansion and research and development, according to the filing. SmileDirectClub’s aligners are currently available in the U.S., Canada, Australia and the U.K.

GameStop to close up to 200 stores by year’s end
Why Cramer thinks Apple’s iPhone 11 will be a boon to Facebook
To Top
error: Content is protected !!