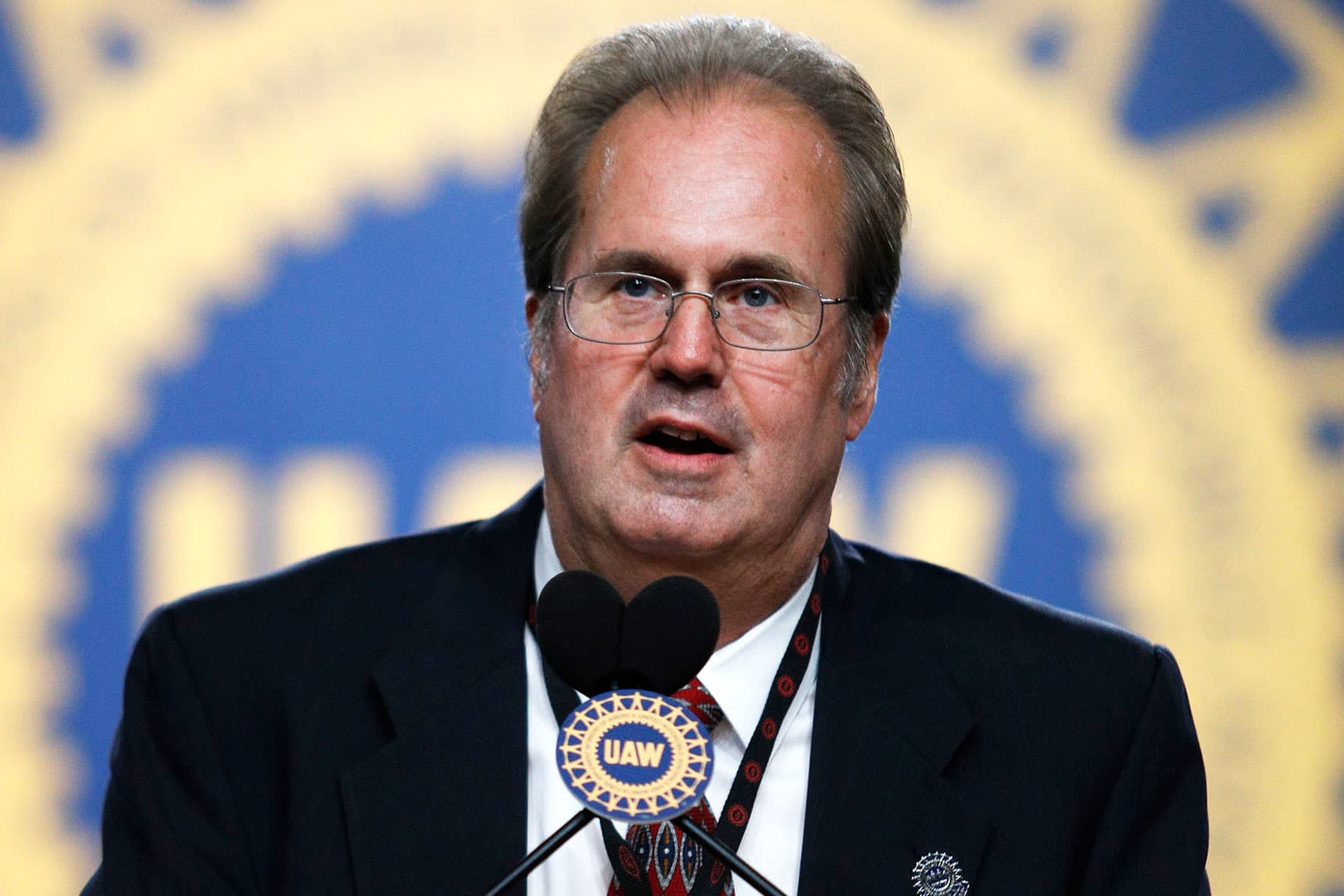 Gary Jones, the newly-elected President of the United Auto Workers (UAW), addresses the 37th UAW Constitutional Convention June14, 2018 at Cobo Center in Detroit, Michigan.Bill Pugliano | Getty ImagesDETROIT – The immediate past president of the United Auto Workers was sentenced Thursday to 28 months in prison for his part in a scheme with other leaders to steal as much as $1.5 million in union funds for lavish trips, golfing, alcohol and other luxuries.Gary Jones is the second UAW president to be sentenced as part of a multiyear corruption probe into the prominent American labor union. He is one of 15 people to have been charged, including three Fiat Chrysler executives and his predecessor, Dennis Williams, who was sentenced last month to 21 months in prison.His sentencing is among the last in the multiyear corruption probe, which has tarnished the union’s reputation, created mistrust among its members and led to federal oversight of the UAW.During the hearing, Jones spoke quickly and somewhat emotionally as he apologized to the court, his family and UAW members.”I failed [my family], and I failed the UAW,” he said before asking and pleading the judge for his mercy in sentencing.U.S. Attorneys David A. Gardey described Jones as a “good man” who found himself working in a “culture of corruption.” He said Jones is continuing to cooperate with prosecutors “in other matters” involving the union.Prosecutors had recommended a 28-month prison term for Jones, which was well below a previous range of 46 months to 57 months under a plea deal with federal prosecutors. According to court documents, the lower recommendation is for “substantial cooperation with the government deserving of recognition.””Once Jones’ crimes were uncovered though, he accepted responsibility for his actions and cooperated with the government’s efforts to prosecute his coconspirators and to clean up the union,” prosecutors wrote in a sentencing memorandum.Federal prosecutors wanted Jones to pay $550,000 restitution to the UAW, $42,000 to the IRS, as well as forfeit $151,377.Jones, who led the union from June 2018 to November 2019, pleaded guilty in June to racketeering, embezzlement and tax evasion. As part of the plea agreement, his maximum sentencing was nearly five years in prison.FBI agents finish loading materials into a truck out of the home of United Auto Workers President Gary Jones on Wednesday, Aug. 28, 2019.Michael Wayland / CNBCPrison sentences for those charged as part of the federal probe have ranged from 60 days to five and a half years. Ex-Fiat Chrysler executive Alphons Iacobelli, who led the company’s labor relations, received the lengthiest sentence; however, it was recently reduced to four years.In December, the UAW and federal prosecutors agreed to end the corruption probe into the union under a civil settlement that included an independent monitor overseeing the organization for six years.Other requirements under the deal include the union conducting a memberwide vote to potentially reform its voting process and making certain repayments, including a $1.5 million payment to the IRS. The UAW has already paid back about $15 million to training centers for improper chargebacks uncovered by officials.A spokeswoman for the U.S. Attorney’s Office in Detroit confirmed a federal criminal investigation into individuals regarding the probe is ongoing.Homes of Jones, Williams and other union officials were raided in August 2019 as part of the investigation, which was made public in July 2017.