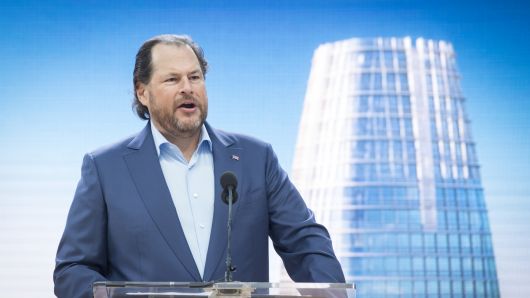 Marc Benioff, chairman and chief executive officer of Salesforce.com Inc., speaks during the grand opening ceremonies for the Salesforce Tower in San Francisco, California, U.S., on Tuesday, May 22, 2018.

Salesforce, which has been bolstering investments of late in business software vendors, just revealed that it owns a stake worth almost $27 million in a consumer company: Lyft.

On Friday, Salesforce said in a filing that it owns 514,255 shares of the ride-sharing company as of the end of the first quarter. At Lyft’s closing price of $51.09, that values the stake at $26.7 million. A spokesperson confirmed to CNBC that the investment was made four years ago, though it hadn’t been previously disclosed.

It’s a departure from the strategy that Salesforce Ventures has followed of investing in companies where there’s an opportunity for a clear strategic relationship. For instance, Salesforce invested in video conferencing software company Zoom at the time of its IPO last month. Salesforce also holds shares of Anaplan, SurveyMonkey and Twilio.

John Somorjai, the head of Salesforce Ventures, told CNBC in an interview shortly after the Zoom IPO that “there are a lot of ways we can bring these products together.”

There’s no obvious partnership with Lyft given the companies operate in completely different spaces. However, in September, Salesforce issued a statement touting Lyft as a customer of the company’s Pardot and Sales Cloud products.

Salesforce CEO Marc Benioff has been critical of Lyft’s top rival Uber for its ethical lapses. Last year, Benioff highlighted issues that Uber faced on a panel at the World Economic Forum and referred to those problems as creating “a crisis of trust.”

Uber held its market debut on Friday, and the stock fell 7.6 percent after the company priced the offering at the low end of the range. Lyft has also struggled since going public on March 29, with the stock dropping 29 percent. According to Salesforce’s filing, its stake in Lyft at the end of the quarter was worth $40.3 million.

WATCH: Why Lyft is the better pick than Uber