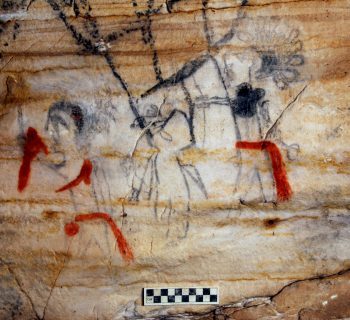 On the walls of Picture Cave in eastern Missouri is a 1,000 year old Native American artwork. The cave, along with the 43 acres surrounding it, was sold yesterday by the Busch family to an anonymous buyer at auction for $2.2 million.
The Picture Cave and its surrounding land are some of the foremost sites of Native American art in the country, and are incredibly precious to the Osage Nation. Along with the eight other tribes of Missouri, the Osage Nation was pushed out of the state as a result of the Indian Removal Act of 1830. The Busches have owned the land since the 1950s and have used it primarily as hunting grounds.

Last year, when the Osage Nation heard that the Busch family was planning to sell the Picture Cave, they began working to procure the land. In collaboration with the Conservation Fund, as well as Fish and Wildlife Services (on the account of endangered bats living in the cave), representatives of the Osage Nation tried to directly buy the land from the Busches to no avail. The amount that they could offer was not enough.

During these failing negotiations, the Busch family had their land valued by Selkirk Auctioneers & Appraisers. Brian Laughlin, the director of Selkirk, said that when he heard that the Picture Cave was located on the land, he thought that the previous estimates Busches had previously received were “unbelievably low.”
“[Picture Cave] is our ultimate sacred site,” according to Andrea Hunter, a member of the Osage Nation and director of its Historic Preservation Office. On the cave’s walls are 290 prehistoric glyphs of exceptional quality that depict people, animals, and mythological figures.
The process of trying to buy back this ancestral land was incredibly frustrating for Hunter and other members of the Osage Nation. “It was our land to begin with and we then had to resort to trying to buy it back,” Hunter said. “And we’ve got landowners who don’t understand the history of the place they live in and whose significance doesn’t amount to more than monetary value [for them].”
After the Busches refused to sell the land directly to the Osage Nation, a representative of the Conservation Fund was present at the Selkirk auction to bid on their behalf. The maximum amount of funds that they had been able to gather was $2 million, just $200,000 less than the winning bid. “Watching it get to $2 million stopped my heart,” said Hunter. “It broke my heart.”

Hunter and her office are currently in contact with a representative of the buyer from Nashville. It is their hope that they might be able to communicate the significance of Picture Caves to the Osage Nation, and perhaps arrange a sale or donation of land to the Native community. As of today, they have not been successful in making direct contact.
When asked if the sale had met any pushback, Laughlin said there had been “feelings and emotions that were not necessarily 100% positive.”