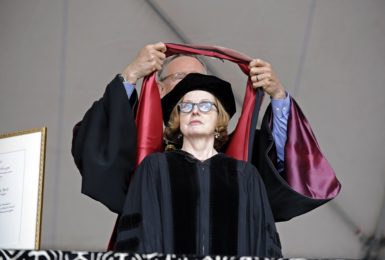 The Dorothea and Leo Rabkin Foundation—an organization in Portland, Maine, that offers grants and awards to art journalists—has given its first lifetime achievement award to Roberta Smith, the co-chief art critic of the New York Times. Per the Times’s editorial guidelines, Smith cannot accept the $50,000 purse that comes with the award, so she has elected to give it to the Art for Justice Fund, which was started by collector Agnes Gund in 2018 and turns funds raised through the sales of artworks into grant money put toward causes related to lowering mass incarceration rates in America.

Smith has been on staff at the Times since 1991. Prior to that, her writing had appeared in Artforum, Art in America, and the Village Voice. She is widely respected as one of the preeminent art critics in America.

“Roberta Smith has been responsible for building an audience for the art of the self-taught, for ceramic art, video art, digital art, systems of re-presentation and much more,” the Rabkin Foundation said in a statement. “Across many traditional boundaries, she has offered a frank, lovingly detailed assessment of new art and artists to her expansive readership. Hers is a voice listened to by millions of readers.”