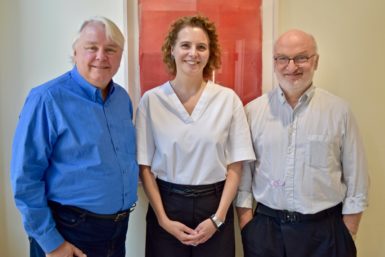 The jurors for this year’s Rabkin Foundation grants. From left to right, Dennis Scholl, Rainey Knudson, and David Frankel.

The Dorothea & Leo Rabkin Foundation in Portland, Maine, has revealed the winners of its 2019 grants for visual arts journalists—including one for ARTnews executive editor Andrew Russeth. This year’s eight grants come with $50,000 each, and are given to journalists who are nominated for being “essential” to the arts in their respective parts of the country, according to a release from the foundation.

Two other ARTnews contributors won grants this round as well. Taylor Renee Aldridge, who recently wrote about artist Jenn Nkiru, won a grant for her writings on Detroit, and Catherine G. Wagley, who last year addressed gentrification in Los Angeles for ARTnews, is being recognized for her reporting on the L.A. art scene.

Russeth has been at ARTnews since 2014, and was the cofounder of Gallerist NY, a New York Observer blog about the art world. His recent writings for ARTnews include an article about the Newfields museum in Indianapolis, a profile of artist Nayland Blake, and a review of the current edition of the Venice Biennale.

Judging the grants this year were Dennis Scholl, the president and CEO of Oolite Arts in Miami Beach; Rainey Knudson, the cofounder of Glasstire; and David Frankel, the former editorial director of the Museum of Modern Art’s publications department and a contributing editor to Artforum.

Earlier this year, the Rabkin Foundation awarded its first lifetime achievement award to Roberta Smith, the co-chief art critic for the New York Times. Through the award, she received $50,000.