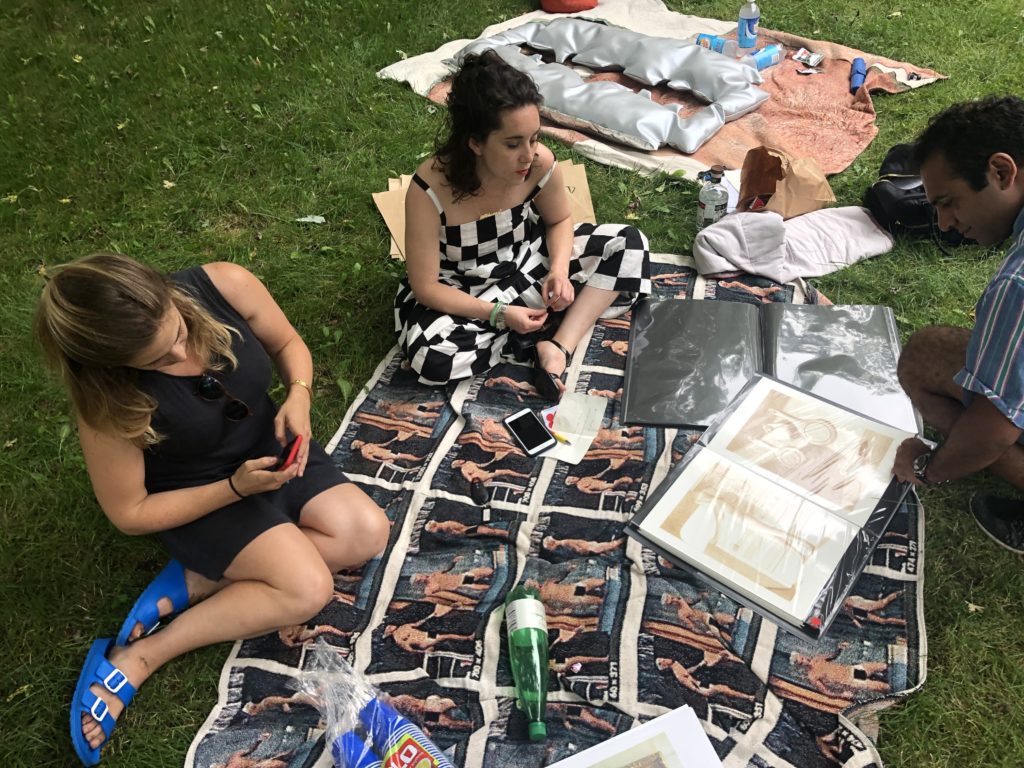 This weekend, as a heatwave gripped New York, with temperatures approaching an astonishing 100 degrees, artists, dealers, collectors, and the like convened out in the Hamptons on Long Island, for the third annual edition of the pocket-sized Upstairs Art Fair.

The event screamed summertime, with 14 dealers from the South Fork and further afield filling out two floors above a surf shop in a big red barn in Amagansett that was once home to the Amagansett Applied Arts School. Perfectly fitting the occasion, its floor is still speckled with paint and glaze flecks.

“There’s just good energy here that is embedded in the space,” Bill Powers, the owner of Half Gallery in New York, said.

Powers started the fair two years ago with Harper Levine, who runs Harper’s Books in East Hampton, and he said that they wanted to create an alternative to the “big white tent, what-do-I-wear-to-the-art-fair sort of events” that typically set up shop in the area.

“I wanted to see something more open, that’s not as polished, and have a lot of camaraderie amongst the dealers,” he said.

The vibe was staggeringly chill—dogs ran around the space without leashes, several visitors sported swimsuits (one man paired his swim trunks with a blue blazer and Crocs), and PBR and rosé flowed.

Powers himself stretched out on some NASA–branded foldout chairs he designed with Tom Sachs while exhibiting paintings by Hiejin Yoo, Daniel Heidkamp, and Lucien Smith, plus a collaborative drawing by husband-and-wife powerhouses John Currin and Rachel Feinstein. 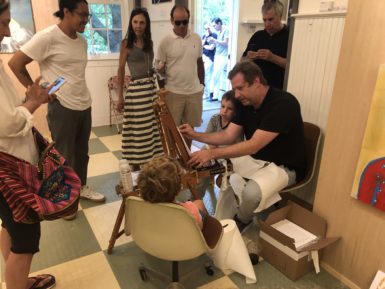 Joel Mesler working on a portrait during the fair’s opening.

The opening day, which was free and open to the public, had a solid number of prominent guests, including actor Josh Brolin, artists Joe Bradley, Robert Longo, and Jules de Balincourt, as well as ARTnews Top 200 collectors Phil and Shelley Aarons. “It’s nice to get people that are, like, museum board members that are coming up alongside locals,” Powers said.

This was the fair’s most ambitious edition yet, as it had previously only taken up the upper floor of the barn (upstairs from the surf shop, hence its name).

Among those stationed upstairs for this round, which run through Sunday, was Miami dealer Bill Brady, who was appearing at the fair for the first time. “I’m really enjoying the group,” he said. “These are a lot of the same dealers that I’ve worked with and grown up with over the years.” Brady’s booth featured work by artists such as Quentin Curry, Anthony Rianda, Susumu Kamijo, and Michael Kagan.

Right at the front door was local stalwart Joel Mesler, who owns Rental Gallery in East Hampton. Mesler was offering a live attraction, producing pastel portraits for $100 a pop in the booth of Harper’s Books. He’s been offering the sessions at fairs in recent years, and estimated that he’s done around 200 portraits. He finished six on Friday.

“I started my day off by selling some art, and now I’m here bringing joy to the fairgoers!” Mesler proclaimed with a grin. But beware the artist who knows the intricacies of the art market: “If somebody goes and tries to sell these portraits at auction, say at Sotheby’s or Christie’s,” he said, “I’ll do portraits on the street-corner below, just to sort of regulate the market.” 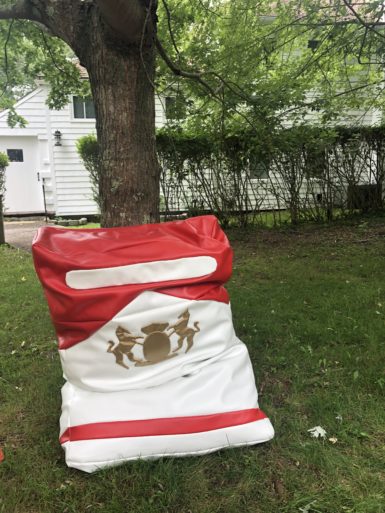 A sculpture by Al Freeman Jr. outside with 56 Henry’s booth.

Also on hand was New York’s Canada gallery, which was showing four miniature paintings by Katherine Bernhardt of Garfield, who was looking suitably relaxed, lounging in lounge chairs in each one (just like the dealers accompanying them).

Another New York veteran, Jack Hanley, saw Cubist-style portraits by Danielle Orchard sell for between $2,500 and $4,000.

Aside from the Mesler portraits, Harpers Books sold an untitled painting by Brian Calvin for $8,500.

At the booth of East Hampton’s Eric Firestone, several acrylic-on-wood cutouts of beachgoers by Mimi Cross, titled Coney Island (2014), went for $2,500 each. Halsey McKay, also of East Hampton, was showing a stunning sculpture by Graham Collins of cast cigarettes, potato chips, broken utensil, and contact solution in bronze to form a tower of every day objects: it sold for $10,000. The booth also sold three plaster paintings by Elise Ferguson for $2,500.

At Ceysson & Bénétière (which has locations in New York, Paris, Saint-Etienne, France, and Wandhaff, Luxembourg), a Matisse-inspired abstract work by Claude Viallat sold for $31,000 and a painting that employs bedsheets as canvas by Franck Chalendard went for $7,000.

Out back, New York’s 56 Henry took an unconventional approach for its booth: blankets designed by artist Al Freeman Jr. held drawings and paintings by the 24-year-old artist Anna Weyant, while attendants mixed tequila-drinks for passersby.

Weyant’s figurative works, reminiscent of children’s book illustrations by Maurice Sendak, were selling for $450 each, and by mid-day, almost 30 of them had found buyers. Two paintings by Weyant, exhibited safely indoors, also sold, one for $6,000 and another for $3,500. Though the blankets weren’t for sale, Freeman had some some of her trademark large-scale plush sculptures up for sale. One was a giant, stuffed pack of smokes that was set up so that it was slouched against a tree.

At one point, a Firestone staffer leaned out the window of the red barn and called out, “How much for a cigarette?”

Rabkin Foundation Awards $50,000 Grants to Arts Journalists -ARTnews
Amid Call for Boycott Over Trustee, Whitney Biennial Artists on Why They Won’t Withdraw Works -ARTnews
To Top
error: Content is protected !!