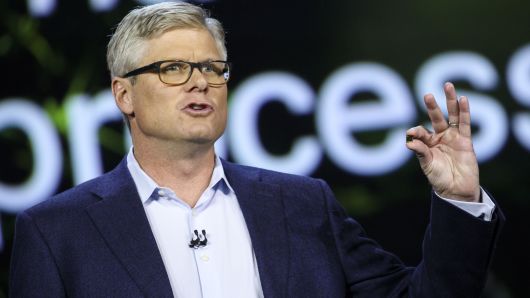 Qualcomm’s executive team has received bonuses for settling a bitter multi-billion dollar legal battle with Apple, one of its top customers, the company said in an SEC filing on Friday.

Qualcomm CEO Steve Mollenkopf received the biggest bonus. He received 40,794 shares of Qualcomm stock, which works out to just under $3,501,757 at Friday’s closing price of $85.84. He made just under $20 million in total compensation last year, according to FactSet data.

The newly granted shares further reinforce that Qualcomm believes the terms of the settlement were favorable. Apple and Qualcomm had faced off in courts around the world over how much Qualcomm charges for the intellectual property inside of the chips that enable devices like the iPhone to connect to cellular networks.

“In making these grants, the Compensation Committee considered the anticipated long-term stockholder value resulting from these agreements with one of the Company’s key customers,” Qualcomm said in the SEC filing.

During Qualcomm’s earnings report earlier this month, it said it expected between $4.5 billion and $4.7 billion in additional revenue from a payment from Apple as part of the settlement.

“We expect non-GAAP combined [research and development] and [selling and general] expenses to increase 6% to 8%. About 6 points of the sequential increase reflects an increase in our employee bonus plan as a result of the impacts of our Apple settlements,” Wise said.

Qualcomm is up 50% since the settlement.

Here are the bonus shares, according to Qualcomm’s SEC filing:

WATCH: Qualcomm CEO: We will have a productive relationship with Apple.