Privacy concerns are starting to weigh on adoption of smart speakers and may even be dampening usage among existing owners, the latest Smart Audio Report from NPR and Edison Research shows. However, according to the survey of more than 2,600 US adults, 69% of smart speaker owners still use virtual assistant devices every day.

44% use more often but 21% less often. The report says that there are 118.5 Million smart speakers in U.S. homes but only 53 million owners; some homes have two, three or more speakers. It explores a range of questions surrounding usage and engagement. However, the most interesting aspect of this wave of the study involves questions about privacy and how they’re affecting perceptions of smart speakers and displays among owner and non-owners.

Among current owners, 44% use the devices more often but 21% said that they now use these devices less frequently than when they first got them. There’s no explanation offered for the decline — it could be disappointment over capabilities — but other survey findings strongly suggest concerns about privacy may be responsible. (But see the video below, which shows some people increasingly resigned to reduced privacy with technology.)

Privacy and data security the top sales inhibitors. Compared with 2017, there are more concerns about privacy and security inhibiting purchasing among non-owners (chart above). Below are the top-three reasons why people aren’t interested in owning a smart speaker or display:

These concerns are also shared by current device owners, as the chart below indicates. This is why I infer that usage declines (21%) are tied to privacy. Still, there are “positive” findings in the report around loyalty and engagement — as indicated by the 69% daily usage figure. 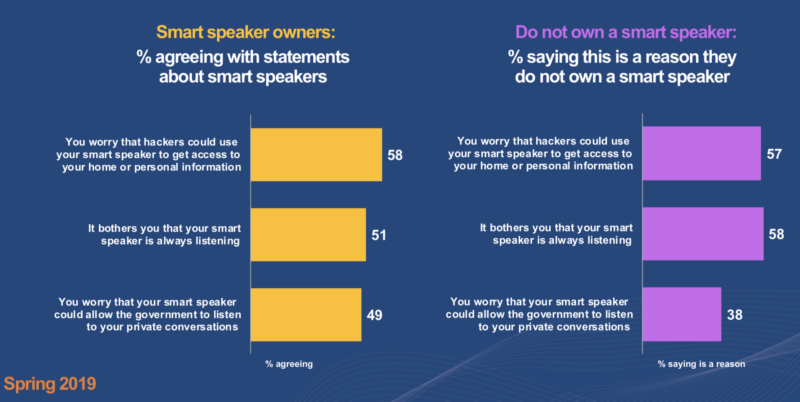 Why we should care. Facebook hasn’t released any sales data for its Portal smart display devices. However, there’s reason to believe that sales have been negatively, perhaps significantly, impacted by concerns prompted by the company’s various data-related scandals since 2016 (e.g., Cambridge Analytica).

Unless “the industry” cleans up its act around privacy, promising technologies such as smart speakers and displays may fall well short of their potential because of consumer reservations.