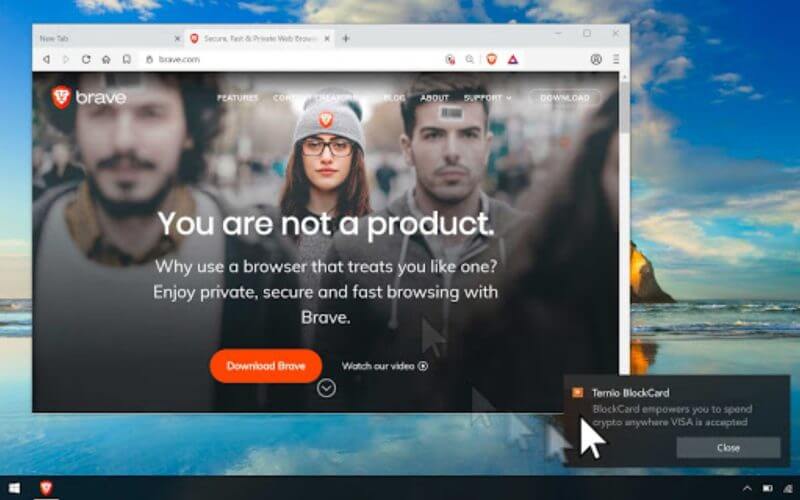 Brave, the browser created by Mozilla founder Brendan Eich, comes with built-in ad blockers that block most standard display ads. Instead, Brave wants to reframe the relationship between digital publishers, advertisers and users with an ad platform of its own.

Brave Ads launched on in the desktop browser for macOS, Windows and Linux Wednesday in four countries — U.S., Canada, France, Germany and the U.K. — and will be rolling out to its iOS and Android apps as well as other markets in the coming months.

What do the ads look like? The ads are served by the browser and appear as notification pop ups. When users click through on one of the ads, they’re taken to a full-page landing page — typically an existing asset.

What’s the ad model and revenue structure? Brave Ads are served only to users that opt-in to the Brave Rewards program and agree to see ads. When users view ads, they accumulate Brave’s Basic Attention Token (BAT), a blockchain-based system. The Brave browser can monitor users’ browsing and attention behavior anonymously — the data lives locally only and isn’t passed back to Brave, publishers, advertisers or any middle-men.

Users that opt-in to Brave Rewards receive 70% of the ad revenue share “as a reward for their attention.” By default, those tokens are distributed to publishers in proportion to the amount of time users spent on their sites. Users can also choose to donate their revenue share to specific publishers they wish to support. Similarly, publishers can use tokens to reward users for engaging with promoted content or charge for premium content.

What targeting is available? “Relevant, targeted ads are important to everyone,” said Temkin, “but we don’t want user data to leave the device.”

Brave picks up search and browsing data and uses machine learning models to build up profiles of users’ interests. This interest data only lives on the user’s device and is not shared with Brave, advertisers or publishers. While the user is browsing, Brave calls from a catalog of offers (essentially a small text file of available ads) and matches them against the user profile to determine what ad to deliver at what time. Ads are calibrated on a timing basis to serve when users are most likely to click.

Interest categories available for targeting are based on a sub-set of IAB categories. Advertisers can target ads by country, where they are available. There is one catalog per region. The browser makes no demographic inferences for targeting purposes.

What measurement is available? Advertisers get aggregate confirmation of ad views and clicks to the landing pages. If a user clicks all the way to the advertisers’ site, the site can gather data as a first-party relationship. Brave will block any third-party tracking on the site by default.

How do I buy Brave Ads? For now, this is a managed-service program, but a self-serve ads platform is in development.

Why this approach? There are several problems Brave is trying to solve with this model. One is to help save users money on their mobile phone bills by eliminating data usage spent on loading ads and trackers and improve battery life. It is also designed to cut out the adtech middlemen that take varying cuts of publishers’ ad revenue in a typical programmatic exchange. Another is to stop ad fraud and malvertising and give advertisers more mindshare by not having multiple advertisers compete for attention on a page.

Why we should care. Brave claims 5.9 monthly active users across its platforms and doesn’t yet register on market share reports. Google’s Chrome browser, meanwhile, has more than 60% share globally. Chrome’s approach to fighting the root cause of ad blocking adoption is to filter out ads on sites that don’t comply with the Better Ads Standards.

So can Brave change market dynamics? It’s obviously an uphill battle against entrenched competitors, adtech ecosystem, not to mention user habits, but it’s an interesting and potentially viable alternative to the current system that just about everyone agrees is far from perfect.

Who is currently participating? Brave Ads has been in limited beta since January 15. There are currently 55,000 publishers and YouTube and Twitch channel creators participating in the program, said Temkin. Vice, Home Chef, Ternio BlockCard, MyCrypto, and eToro are now supplying ads. BuySellAds, TAP Network, AirSwap, Fluidity, and Uphold joined as part of the early access program for developer and beta users in January.

A promotion for the Twitch science-fiction series Artificial is an example of a campaign running at launch.

Twitter’s ad revenue jumps 18% as marketers invest more on the platform
Salesforce Summer ’19 release preps for Lightning migration: What you need to know
To Top
error: Content is protected !!