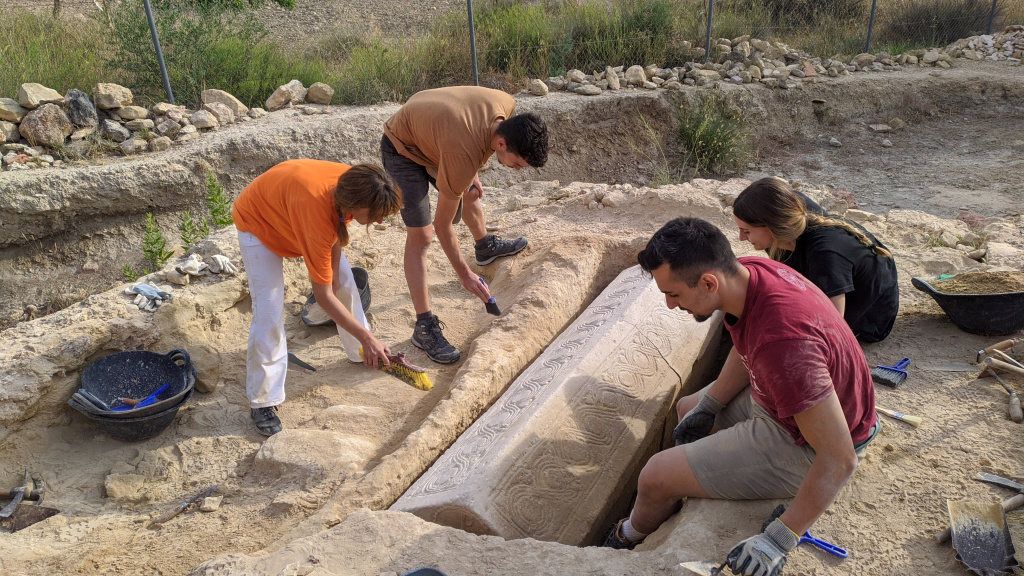 A well-preserved Visigoth coffin has been unearthed by archaeologists at Los Villaricos in southeastern Spain. The University of Murcia (UMU) announced the find last month.
The sandstone sarcophagus was uncovered during a two-week-long excavation last month led by UMU professor Rafael González Fernández, along with fellow researchers Francisco Fernández Matallana, José Antonio Zapata Parra, and José Javier Martínez García.
The six-and-a-half-foot-long sarcophagus is intricately carved with a curving spiral motif. Ivy leaves decorate the lid. Inside the coffin, researchers discovered a set of human remains, with a possible second body laid at the other’s feet.

“As we cleaned what looked like a sculptural element, it turned into a spectacular sarcophagus,” said González Fernández in an email to ARTnews. “Its chronology, in the absence of more detailed analysis and studies, would be around the 6th or even the 7th century.”
The headboard features a religious marker known as a Tau-Rho, or an inverted alpha and omega. Historical sources indicate that it would have signified “the beginning and end” symbolized by Jesus’ crucifixion.
During the Roman era, Los Villaricos was a rural settlement with a large villa. It once encompassed a residential area, thermal baths, and industrial processing facilities for the production of oil, wine, and other goods. Excavations have revealed a central courtyard, mosaics, a variety of ceramics, tile pavements, limestone tesserae of different colors, and coins.

Los Villaricos was repurposed by the Visigoths as a place to bury their dead, with one of the rooms being converted to structure with an apse that may have been used for religious purposes. González Fernández said the oecus—a principal hall or salon in a Roman villa—was transformed into a church.
“This would explain the presence of the burials located next to the church,” he said.
Researchers say the 42 documented tombs discovered so far have all been arranged around the apsidal space. In that area, skylights decorated with Christian iconography have also been found. They date back to the end between the 5th century C.E. and the early 7th century C.E.
The Goths were a Germanic people of the Migration Period. They split into Visigoths (the western tribes) and Ostrogoths (the eastern tribes) during the 4th century C.E. The Visigoths successfully invaded the Roman Empire and became one of the strongest kingdoms in western Europe, eventually ruling Spain and Gaul until 711 C.E.

Before the Visigoths turned this Roman villa into a necropolis, the site had multiple phases of occupation, beginning in the 1st century C.E. It contains one of the largest oil mills to be discovered on the Iberian Peninsula, complete with two mills, six presses, and a settling room. Over 2,200 square feet of space was dedicated to the production of oil before the mill was abandoned in the 5th century C.E.
The excavation work carried out last month focused on three main areas: cleaning a possible source for the town’s water supply; examining what is currently called the “pool area” where an unknown product is thought to have been produced and stored; and uncovering the remaining tombs.