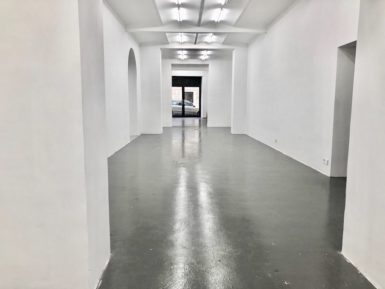 New York’s Postmasters Gallery, headquartered in a space in the city’s Tribeca neighborhood, will unveil its first international outpost this month in Rome. The new space, located near the Colosseum and helmed by Paulina Bebecka, the gallery’s director-at-large in Europe, will open on June 20 with an exhibition of haiku paintings by Rafaël Rozendaal.

Magda Sawon, co-founder of Postmasters, told ARTnews that, for the last two years, the enterprise has functioned as a sort of “nomadic gallery” in the Eternal City, staging pop-up exhibitions in three different locations. A recent show titled “Role Play,” which Postmasters organized in collaboration with the Rome-based Orange Garden gallery, took place at what will be PostmastersROMA’s permanent home at Via G. Mario Crescimbeni, 11.

“It doesn’t follow obvious patterns of where galleries open branches,” Sawon said of the expansion to Rome. “But we have this very firm belief that the city has vitality and that it also needs to be vitalized by a gallery like ours, which is super-contemporary. It’s a bit of an intervention, but we have great hopes.”