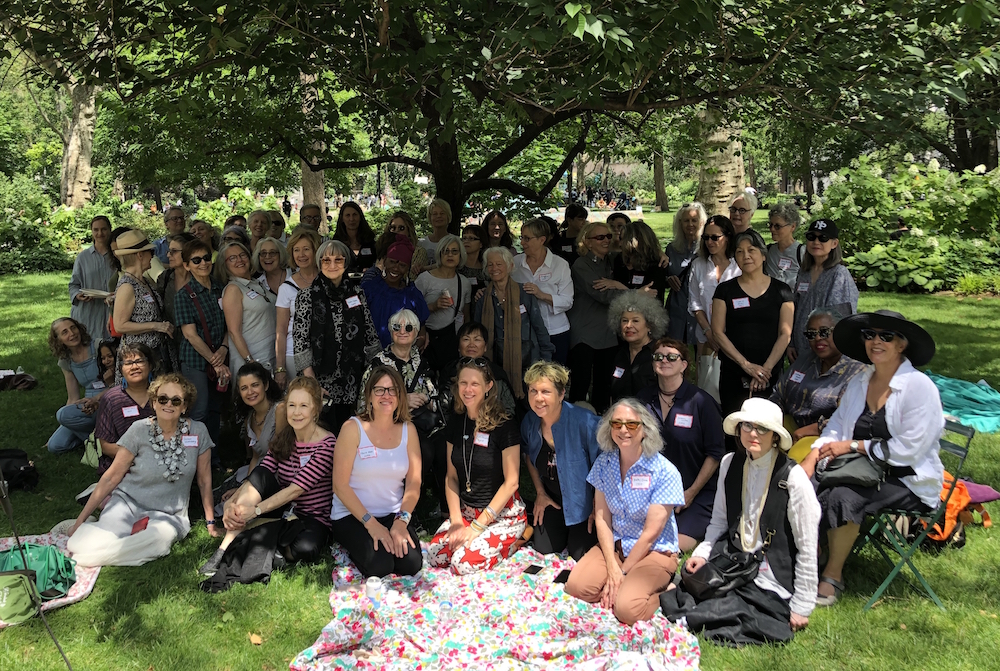 Recipients of the Anonymous Was a Woman grant in Madison Square Park.

COURTESY ANONYMOUS WAS A WOMAN

Last Saturday afternoon, a group of 60 women could be seen lunching on the grass in New York’s Madison Square Park. “There’s so much linen!” one announced to the group. But this was not an ordinary picnic—everyone invited was an artist of note. Jessica Diamond, Maren Hassinger, An-My Lê, Renee Stout, and Jill Slosburg-Ackerman were but a few of the artists who were there that afternoon.

The cause for celebration was Anonymous Was a Woman, a program that has awarded grants of $25,000 to 230 women since it began in 1996. The grants used to be provided by an anonymous source, though last July, the donor revealed herself as artist Susan Unterberg. Sporting aubergine sunglasses, she played the role of host at the picnic, addressing the many women whose work she has recognized over the years.

“I want to tell you how delighted I am to finally meet some of you, as well as see some old friends,” Unterberg told the crowd. “When I went public last summer, somebody had the idea to have a picnic, and here we are! And the gods have given us the best day of the year, so they must be the female gods.”

Before a cake was cut to celebrate the women’s accomplishments, artist Cheryl Donegan stepped up to a microphone to honor grant recipient and feminist-art pioneer Carolee Schneemann, who died earlier this year. “I’m still reeling from losing Carolee,” she said, then looked up to the azure sky. “I just want to say: We love you, Caro.” 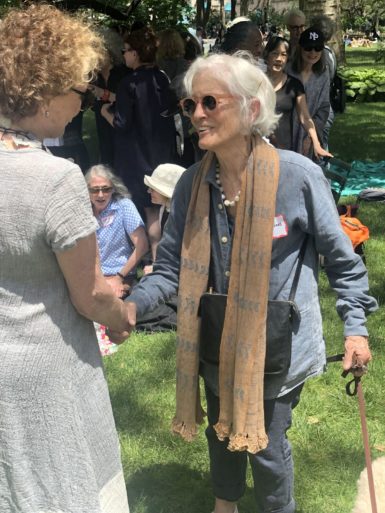 COURTESY ANONYMOUS WAS A WOMAN

Performance artist Hilja Keading, who won an Anonymous grant in 2014, was noshing on flatbread when she noticed that another guest had joined the picnic. “We’re standing across from my idol,” she whispered, gesturing toward a denim-clad Joan Jonas. As usual, Jonas was accompanied by a plus-one: her dog, Ozu. Jonas and Keading could later be spotted sitting together, enjoying slices of lemon raspberry cake.

Of receiving the grant in 1998, Jonas said, “It made a huge difference to me, unexpectedly. It allowed me to produce things I wouldn’t have been able to produce without it.”

The award also came at the right moment for Rochelle Feinstein, who received it in 2008, just as the recession hit. At the time, Feinstein may have felt the economic squeeze, but she was able to persevere by means of the funds provided by Unterberg. “The most exciting thing about Susan revealing herself is that it motivates other female-led initiatives,” Feinstein said.

Gradually, the afternoon’s proceedings caught the attention of passersby. A young man on a bike pulled up near the gates and, assuming he had almost crashed a reunion, remarked, “Man, I wish I went to whatever college this was!”

He wasn’t necessarily wrong—this was a sorority of sorts, and the grantees knew it. “One of the best parts about being a recipient is receiving the power to nominate people [for the next round],” artist Suzanne McClelland said as the picnic wound down. “This way, we get to pass the torch.”