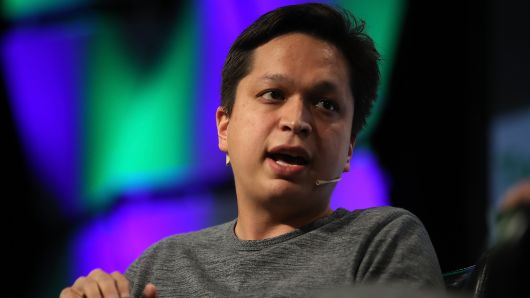 Pinterest CEO Ben Silbermann speaks in conversation with Matthew Lynley of TechCrunch during the TechCrunch Disrupt SF 2017 on September 18, 2017 in San Francisco, California.

Pinterest raised $1.43 billion in its IPO after pricing the offering at $19 a share on Wednesday, valuing the company at $10 billion.

Pinterest, which is expected to start trading on Thursday on the New York Stock Exchange, had originally given a pricing range of $15 to $17. But investors appear to be showing an appetite for the social media company despite the challenges Lyft has faced since becoming the first consumer tech IPO of the year last month.

CNBC reported earlier on Wednesday that the company would price above the expected range. Pinterest’s revenue jumped 60% last year to $756 million, and the company moved significantly closer to profitability with a net loss of $63 million. Still, Pinterest’s IPO is below the $12 billion valuation it attained in a 2017 financing round.

Pinterest is among the first big tech IPOs of the year and is scheduled to start trading around the same time as videoconferencing company Zoom. Ride-hailing company Lyft was the first big offering to hit the market in March, but the stock has dropped 19 percent from its IPO price.

Founded in 2010 by Ben Silbermann, a former Google employee, and Evan Sharp, who was previously a designer at Facebook, Pinterest has grown to 265 million monthly users. The company burst into the mainstream in 2012 with rapid growth, but expansion has since cooled due in part to a work culture that many employees describe as slow when it comes to making decisions.

Silbermann’s stake is worth close to $1 billion at the offer price. Bessemer Ventures owns shares valued at $1.13 billion, while FirstMark’s holdings are worth $844 million and Andreessen Horowitz’s stake is worth $827 million.

Goldman Sachs and J.P. Morgan Chase are leading the offering.

Waste Management is the stock to get into here
Chevron’s Anadarko merger won’t be the only oil deal this year
To Top
error: Content is protected !!