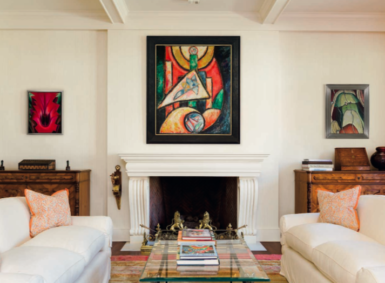 Pieces from the Michael Scharf collection.

Nearly 30 paintings from the Michael Scharf family collection will lead a Christie’s sale of American art in New York on May 22. Among them are pieces by artists from what’s known as the “Stieglitz Circle” (Georgia O’Keeffe, Marsden Hartley, and Arthur Dove were included among their ranks), as well as abstract works by artists Max Weber and Charles Green Shaw. O’Keeffe’s Inside Red Canna (1919), which has been given a $4 million–$6 million estimate, is expected to be one of the evening’s most expensive lots.

Scharf began collecting American modernist works in 1972, starting with a Dove painting he acquired that year. In a statement, Scharf said, “The more I studied, the more I came to believe Arthur Dove, Georgia O’Keeffe, Max Weber, Marsden Hartley, and John Marin were important artists who were responsible for instigating a transformation in the development of Modern American art.”

Eric Widing, the deputy chairman of Christie’s American art department, told ARTnews, “Michael Scharf assembled an authoritative collection which represents, in depth, the emergence of modernism in America. . . . Some works are among the earliest American abstractions, others explore nature, and still others touch on diverse subjects such as the city, music, and mystical and symbolic imagery. It is a justly celebrated collection.”