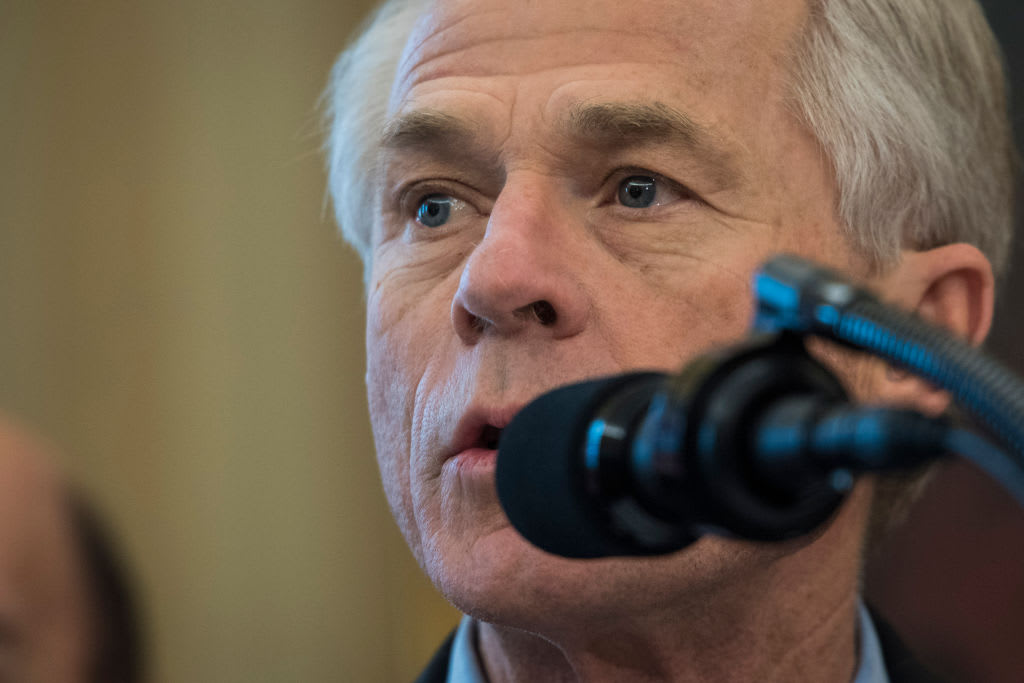 National Trade Council adviser Peter Navarro speaks during an executive order signing ceremony regarding trade in the Oval Office of the White House in Washington, DC on Friday, March. 31, 2017.Jabin Botsford | The Washington Post | Getty ImagesPresident Donald Trump’s trade advisor Peter Navarro believe’s it’s certain that Congress passes landmark trade legislation known as the United States-Mexico-Canada Agreement before the end of the year. “I’m going to give it a 100% here because it’s so important for this country and I can’t imagine that Nancy Pelosi would not put this on the floor to at least have a vote,” Navarro told CNBC “Squawk Box” host Joe Kernen.”I mean, as you know, there’s some progressive politics going on: They want to take our cars and our cheeseburgers, our private health insurance, raise our taxes and then give the money away to illegal immigrants for health care,” he added. “I don’t think that’s who Nancy Pelosi is. I think she is going to do the right thing on this and get the job done.”The legislation, shortened to USMCA and billed as a replacement to the North American Free Trade Agreement, is one of the administration’s key economic accomplishments to date. The accord makes changes to two the trade relationships between the U.S. and two of its largest trading partners, including stricter rules on the country of origin for auto parts and better enforcement of wage rules.But the USMCA could be hamstrung if the Democrat-held House refuses to bring it to a vote as signed by the three countries last year. House Speaker Nancy Pelosi and top Democratic negotiators remain unconvinced it provides enough protection for American workers and the environment. They also worry that a piece of the agreement could hike drug prices for U.S. consumers.Pelosi’s office did not immediately respond to CNBC’s request for comment on Navarro’s hopes, but a spokesperson for Speaker said on Monday that “the substance will determine the timing” of any vote.Navarro, a known trade hawk, has played a critical role in the negotiations with Canada and Mexico, as well as in the current U.S.-China trade war. He has been a consistent advocate of the administration’s use of tariffs as a way to coerce Beijing into making concessions during the bilateral negotiations.The administration’s critics have bemoaned the ongoing trade war with China and its potential impact on GDP growth. Farmers and other small business owners in particular have felt the brunt of such trade disputes, and want to see the USMCA approved to end linger uncertainty about access to Canadian and Mexican markets.