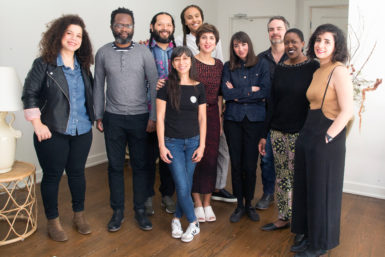 The 2019 cohort of the Soros Arts Fellowship.

The Open Society Foundation in New York has announced the 2019 recipients of its Soros Arts Fellowships. Some 11 artists, curators, researchers, and filmmakers from eight different countries are receiving the 2019 fellowships, which recognize work having to do with migration and come with stipends of $80,000.

Rashida Bumbray, the foundation’s senior program manager, said in a statement, “Across the globe, the political environment is increasingly characterized by polarizing and reductive notions about people who migrate. That’s why this work to broaden understandings of migration, share self-determined narratives, stimulate critical discourse, and create momentum for change is so urgent.”

The funds awarded will go toward creating a new project over the next 18 months. Firelei Báez will create a series of works concerning the story of Marie Louise Coidavid, the first queen of Haiti, who was exiled, and Bouchra Khalili will create a video installation about the struggle for equal rights for immigrants in France.