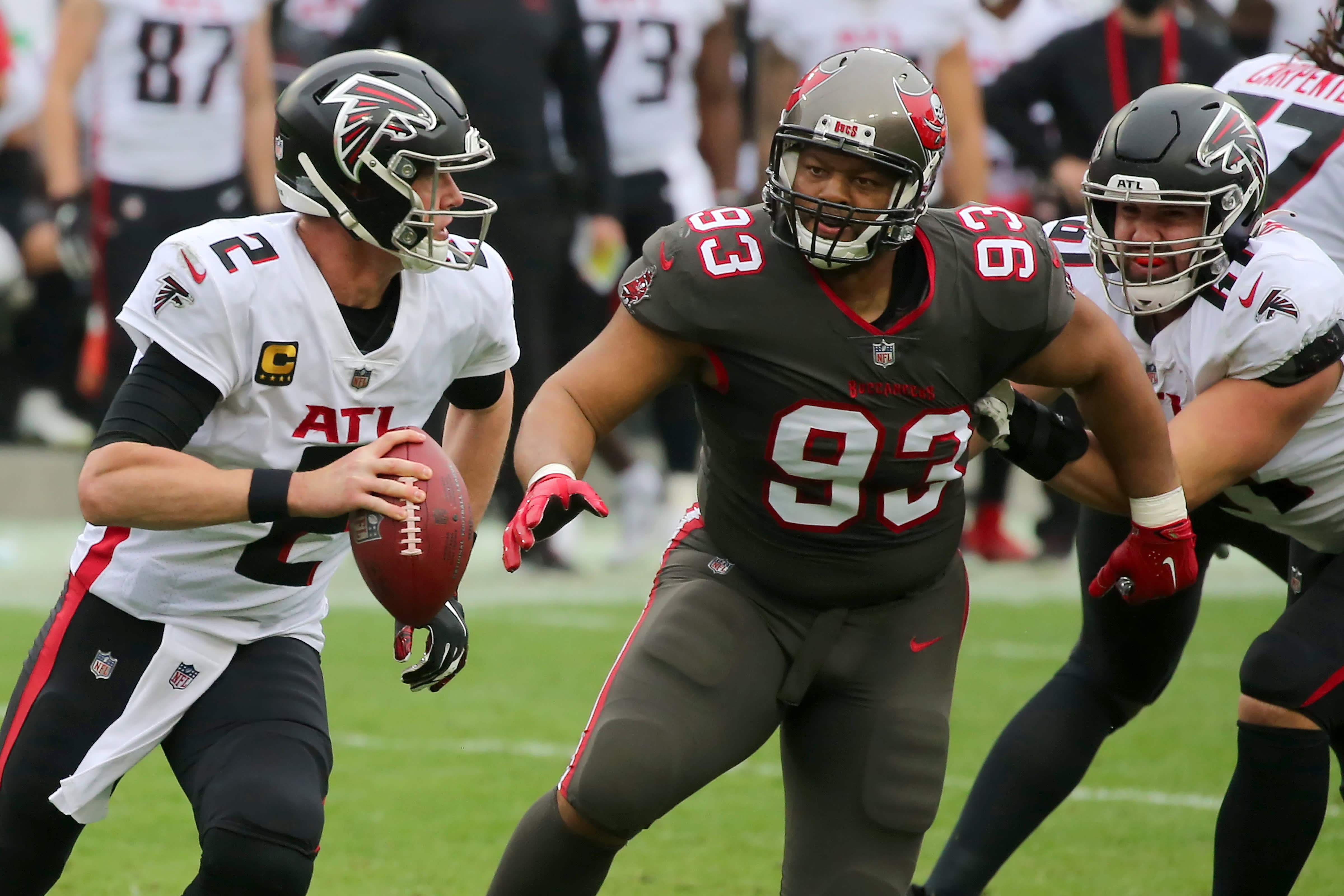 Matt Ryan (2) of the Falcons is chased by Ndamukong Suh (93) of the Bucs during the regular season game between the Atlanta Falcons and the Tampa Bay Buccaneers on January 03, 2021 at Raymond James Stadium in Tampa, Florida.Cliff Welch | Icon Sportswire | Getty ImagesNational Football League lineman Ndamukong Suh tries to speak with Warren Buffett quarterly to catch up and solicit investment advice.The two have been close since 2009, when Suh attended the University of Nebraska. The last time he spoke with the “Oracle of Omaha” was during the holidays. Suh, who now plays for the Tampa Bay Buccaneers, said Buffett discussed opportunities and being in position when they arrive.”As you can see, he’s been super cash-heavy,” Suh told CNBC on Friday. “It’s being prepared to make moves and see where there’s opportunities in the market.”Though Suh is busy preparing for the New Orleans Saints on Sunday, in a showdown between iconic NFL quarterbacks Tom Brady on the Bucs and Drew Brees on the Saints, he said he stays aware of market turmoil and activity via CNBC mobile alerts.  While waiting for investing opportunities, he’s also preparing for life after football.”I have aspirations to be more successful off the field than I was on the field,” Suh said. “I think I’m in a fairly good place, but I know I have a lot of hard work ahead of myself to accomplish that.”Suh’s portfolioSuh, 34, has been particularly keen on opportunities in hospitality and restaurants, and says he’s “bullish” on the sectors.”I’ve seen a lot of good growth in those areas that a lot of people wouldn’t expect,” Suh said. (He’s an investor in a SPAC in the hospitality space, but declined to name it.)”There’s going to be a bigger demand as the vaccine is rolling out and people more open to being out in public,” Suh said. “Deliveries and the opportunity to grab and go; I’ve seen a lot of success in those spaces.”Suh didn’t add publicly traded food companies to his portfolio in 2020, but privately he has “projects in the pipeline” this year around Portland, Oregon, where he grew up.”We’ve signed leases and waiting for things to get up and rolling as things come back,” Suh said.Other investments include Silofit, a fitness company that specializes in privatized workouts. The Canadian company went through a $2.5 million fundraising round last November, according to Crunchbase, and Suh says the firm is expanding.He’s used his NFL stardom to make connections with Gary Shiffman, chairman of real estate company Sun Communities Inc, and former Starbucks CEO Howard Schultz. He has stock in both companies and is exploring investments in tech firms, too.”I would say I’m a hands-on investor,” Suh said. “I like to get my hands dirty. I like to add value, which is why I like to be an advisor to companies if I’m not a board member or a venture partner.”Defensive tackle Ndamukong Suh of the Detroit LionsGetty ImagesA meeting with Phil KnightWhile with the Detroit Lions in 2011, Suh made the headlines when he was suspended for two games after stomping a Green Bay Packers player. He returned to Portland and met with Nike founder Phil Knight, who helped him turn a negative into an opportunity.Suh said Knight told him: “‘We’re going to be able to leverage this from a branding perspective.’ And Nike is one of the smartest groups as storytelling, so they’ve been able to leverage me in a lot of ways.”Since then, Suh’s foundation has focused on providing opportunities for others, one of which he described as the “young Black professional housing project.” Suh’s mission is to provide housing to young entrepreneurs, allowing them to focus on building their business, not on rent.With Covid-19 impacting the nation, rent prices in the city have declined, but monthly rent for a a one-bedroom apartment still exceeds $1,100, according to The Oregonian, which used data from apartment websites.”Rent is not easy,” said Suh, adding he has a 40-unit and 56-unit project in the architect phase before moving to city approval.”I think they’ll find that it’s a good project and one that will come online soon,” he said. “It’s high-quality living and having the ability to help young professionals get their feet wet in their business focuses but also at the same time, not having to be concerned with their living situation.”Tom Brady #12 of the Tampa Bay Buccaneers throws a pass during the first half against the New Orleans Saints at Raymond James Stadium on November 08, 2020 in Tampa, Florida.Mike Ehrmann | Getty ImagesBrady owes SuhSuh described the NFL’s Covid-19 season as “challenging,” especially with changing protocols as the league got serious following an outbreak on the Baltimore Ravens.”I’m lucky to be an older guy,” he said. “I anticipated what I needed to do and knew all I needed to take care of when it comes to football. The ancillary pieces, I could just handle that as it came.”Suh added he’s was impressed with how young players on the Bucs handled the season, especially rookies.”I know their head was spinning just with football, let alone with the pandemic they had to deal with,” said Suh. “Definitely a challenging year but something that we all believed that we could handle. As professional athletes, we’re always adjusting and adapting. So, I think it’s in our blood to be able to find ways to get things done.”Speaking of getting things done, Suh is counting on Brady to lead the team past the Saints to continue their pursuit of a Super Bowl. It would be his first title and Brady’s seventh.Suh gives Brady flak for the 2019 Super Bowl the quarterback cost him, as the Los Angeles Rams fell to Brady’s New England Patriots.”He owes me a Super Bowl since he stole one from me in [2019],” Suh joked. “I got to take care of business this year and would love to get that Super Bowl,” he added. “I’ve seen a lot of individual success, but I need that team success to really solidify my career.”