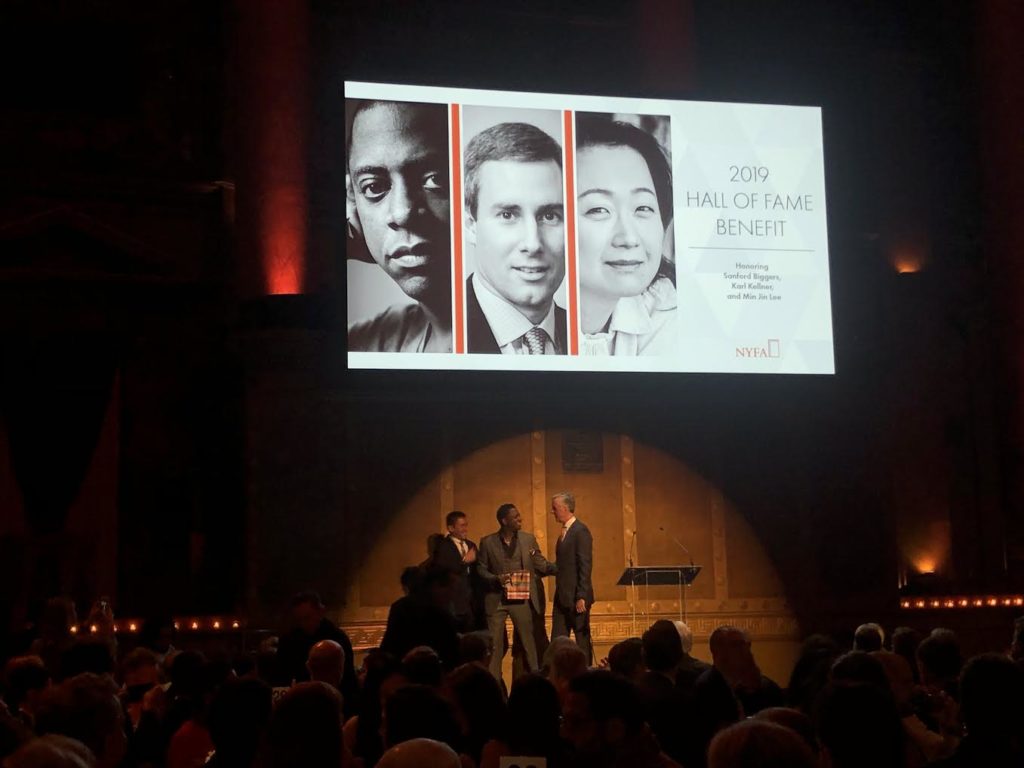 The New York Foundation for the Arts hosted its annual Hall of Fame benefit on Thursday night to honor fellowship recipients responsible for, as foundation director Michael L. Royce put it, “profound impact in their field.” In a repurposed bank in New York City’s Lower East Side, the arts-inclined congregated to celebrate artist Sanford Biggers, patron Karl Kellner, and novelist Min Jin Lee.

Before the ceremony began, a silent auction was hosted in the space’s lobby, with guests, including artist Derrick Adams, Marianne Boesky Gallery director Stephanie Gabriel, and Tom Finkelpearl, the commissioner of New York City’s Department of Cultural Affairs. On the subject of the foundation’s different ways of supporting artists with financial aid and other resources, Finkelpearl told ARTnews, “New York is an incredibly difficult and expensive place to live. NYFA is one of the institutions that makes it possible for artists to be here.”

Across the room, Biggers, who in 2005 received one of the yearly Artist Fellowships that grant $7,000 from NYFA and the New York State Council on the Arts, concurred. “When I got the fellowship, it was one of those times when I really needed a boost,” he said between bites of skewered chicken satay. “It was good to get the support and recognition that someone was liking what I was doing. It felt like, Good, this means I can carry on.”

Carry on he did, with a practice devoted to interdisciplinary works that deal with African-American ethnography, Americana, and spiritualism. “It gave me the fuel to keep my studio open,” he said—”and here I am today, still doing it.” 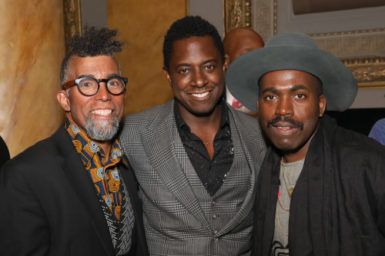 As the silent auction ended, dinner commenced and remarks in the main room began by way of Carmelita Tropicana, another past Artist Fellow who sported a Madonna-esque glittered bra over her gown—“because art uplifts!” she said. Tropicana started by honoring another Hall of Fame inductee, Carolee Schneemann, who prior to her death last month had been inducted into the Hall of Fame in 2018. “She loved the arts. She loved culture. But most importantly, she loved cats,” Tropicana said. A work by Schneemann was part of the silent auction, a digital print titled Ice Music For John (2018) with a starting bid of $1,500.

The auction also included selections related to NYFA’s Immigrant Artist Program, which provides mentors to artists who immigrate to the U.S. Works by Laetitia Soulier and Shihori Yamamoto owed in part to the program, which expanded beyond New York this year through a donation from the Ford Foundation to include mentorship arrangements for more than 450 immigrant artists in cities now including Detroit, Newark, Oakland, and San Antonio.

One of those artists, Angel Kaba, who was born in Brussels to parents from Congo and Martinique, took to the stage to tell the audience how the program helped her. “When I came to the U.S., it wasn’t like the movies,” she said. “It was a real challenge.” As an artist living with eight roommates in a basement in New York, the program provided a “support system. They really cared about us, they really gave us the opportunity to be ourselves, to express, to connect, to learn to share stories and experiences with amazing talented artists of different nationalities. All I wanted to do was make people laugh, dance, and parlez Francais!”

Near the end of the evening, Royce, the director, thanked the foundation’s donors and said, “I think everyone in this room knows that, without artists, many stories would not be known. Stories allow us to share who we are, what we’ve experienced, and what we imagine. They are a special communication from one individual to another, and as I was thinking about this event I realized that all of us together are making up the story of NYFA.”