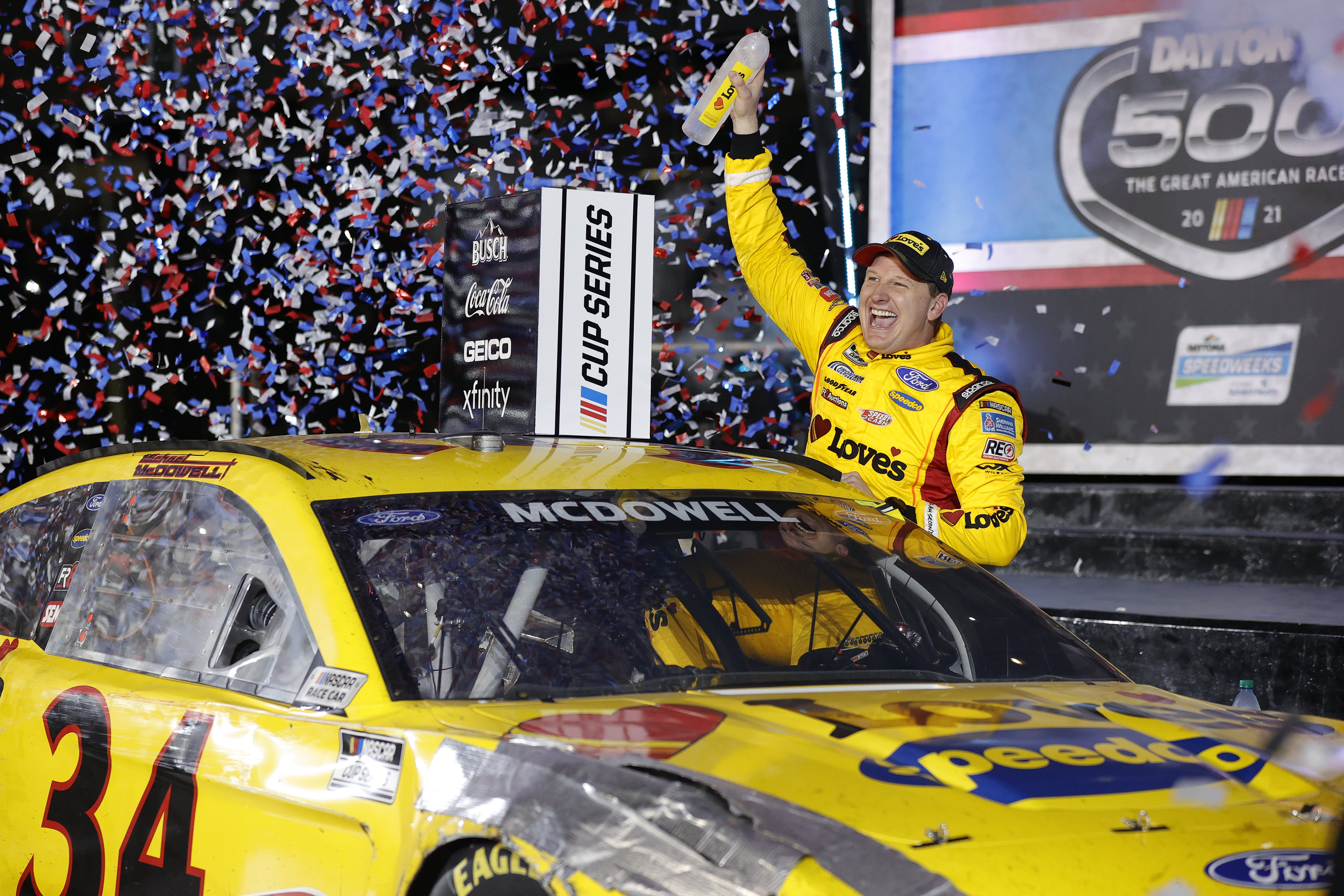 Michael McDowell, driver of the #34 Love’s Travel Stops Ford, celebrates in victory lane after winning the NASCAR Cup Series 63rd Annual Daytona 500 at Daytona International Speedway on February 14, 2021 in Daytona Beach,Jared C. Tilton | Getty ImagesThe rain just keeps hurting NASCAR’s top event.Sunday’s 2021 Daytona 500, impacted by a nearly six-hour rain delay, attracted an average of 4.83 million viewers, Fox Sports has confirmed to CNBC. It marks the lowest-viewed Daytona 500 in the history of the race. Roughly 7 million viewers watched the 2020 event.Front Row Motorsports’ Michael McDowell recorded his first career win, earning the Harley J. Earl trophy. He became only the eighth driver to record his first career win at the race. Hendrick Motorsports’ Chase Elliott came in second.Sports Media Watch reported the event attracted roughly 8 million viewers before the delay, which occurred around 3 p.m. Eastern.Last year’s Daytona 500 also suffered through a rain delay, which moved the event to a second day. The ratings suffered, too, and the 2020 race averaged 7.3 million viewers across both days. The 2019 and 2018 races averaged roughly 9 million viewers, but that was down from over 11 million viewers the race averaged in 2017 and 2016.Flames erupt during a last-lap crash consumes several cars during the Daytona 500 on February 14, 2021 at Daytona International Speedway in Daytona Beach. Fl.David Rosenblum | Icon Sportswire | Getty ImagesThe 2021 Daytona 500 suffered an early 16-car crash after the first 15 laps before the weather delay. NASCAR resumed the race around 9 p.m. Eastern time. It concluded shortly after midnight.The 2021 Daytona 500 produced some early storylines coming into the race, especially around the 23XI Racing team with owners Michael Jordan, Denny Hamlin and driver Bubba Wallace. The No. 23 Toyota car Wallace drove failed pre-race inspections and was forced to start in the rear.Wallace made history a the first Black driver to lead a lap (129) at the race. Wallace was involved in the late accident with one lap remaining and finished 17th.Hamlin, who is a driver for Joe Gibbs Racing also started in the rear – self-willingly. Hamlin attempted to win his third straight Daytona 500, which would’ve been a record, but instead finished fifth.NASCAR will attempt to rebound this weekend with its Daytona Road Course event, which runs Feb. 19-21 on Fox Sports’ FS1 channel.Alvin Kamara #41 of the New Orleans Saints runs the ball during a game against the Tennessee Titans at Nissan Stadium on December 22, 2019 in Nashville, Tennessee.Wesley Hitt | Getty ImagesThe NFL and NASCARMeanwhile, NASCAR also announced New Orleans Saints star running back Alvin Kamara has joined as a car sponsor.Kamara’s The Big Squeezy juice bar franchise has signed on as a sponsor for JD Motorsports’ Ryan Vargas No. 6 Chevrolet car during Saturday’s Super Start Batteries 188 race at the Daytona International Speedway track.Terms of the sponsorship were not provided.Kamara said sponsoring the car was an opportunity he couldn’t lose. With its logo on both sides of Vargas’ car, Kamara can build brand awareness for his juice bar franchises, which are primarily located in Louisiana.”I did a bit of research on Ryan as an individual and JD Motorsports and was impressed with what I read,” Kamara said in a statement. “I’m excited to play a small role in what they already have going on.”Kamara, who finished the 2020 National Football League second among running backs with 16 touchdowns, signed a five-year $75 million extension with the team last September.