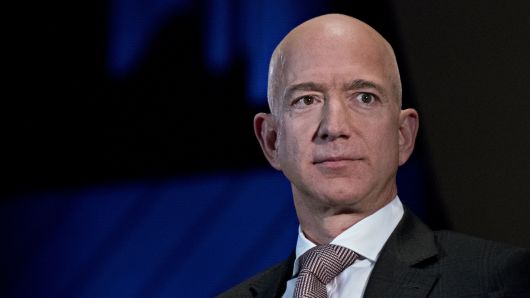 Over 3,500 Amazon employees on Wednesday urged the company to take aggressive action on climate change and reduce its carbon footprint.

Workers called on Amazon to stop offering custom cloud-computing services that support the oil and gas industry in extracting more fossil fuels. They also said Amazon has failed to disclose a company-wide plan to reach zero carbon emissions within the timeline required by science, and that its 100% renewable energy goal has no deadline.

The letter represents the biggest employee-driven push against climate risk in the tech industry yet, as activist tech workers increasingly launch public campaigns to pressure employers on issues like workplace sexual harassment and employee wages.

“Amazon has the resources and scale to spark the world’s imagination and redefine what is possible and necessary to address the climate crisis,” the employees wrote to Amazon’s board of directors and CEO Jeff Bezos. “We believe this is a historic opportunity for Amazon to stand with employees and signal to the world that we’re ready to be a climate leader.”

The letter accused Amazon of donating to climate-delaying legislators, citing the company’s donations in 2018 to 68 members of Congress who voted against climate legislation.

Workers also urged Amazon to terminate all custom solutions specifically designed for oil and gas extraction and exploration, undergo a “complete transition” from fossil fuels and reduce its pollution in vulnerable communities.

The employees are pushing Amazon to approve a shareholder resolution that would force the company to unveil a plan to combat its carbon footprint. The resolution was filed in late 2018, and would be voted on next month.

It’s rare for tech employees to release their names publicly when criticizing their employers, especially at this scale. For instance, hundreds of Google employees walked out last November to protest the company’s handling of sexual misconduct, but few names were attached to the protest.

An Amazon spokesperson did not comment on the letter but told CNBC the company is taking many steps to address climate change.

“Earlier this year, we announced that we will share our company-wide carbon footprint, along with related goals and programs. We also announced Shipment Zero, our vision to make all Amazon shipments net zero carbon, with 50% of all shipments net zero by 2030,” he said.

“In our mission to become ‘Earth’s most customer-centric company,’ we believe our climate impact must be a top consideration in everything we do,” the workers said. “We have the power to shift entire industries, inspire global action on climate, and lead on the issue of our lifetimes.”

Lyft shares drop to a new low as experts ahead of Uber’s debut
Patagonia sues Budweiser’s parent for its ‘copycat’ beer brand
To Top
error: Content is protected !!