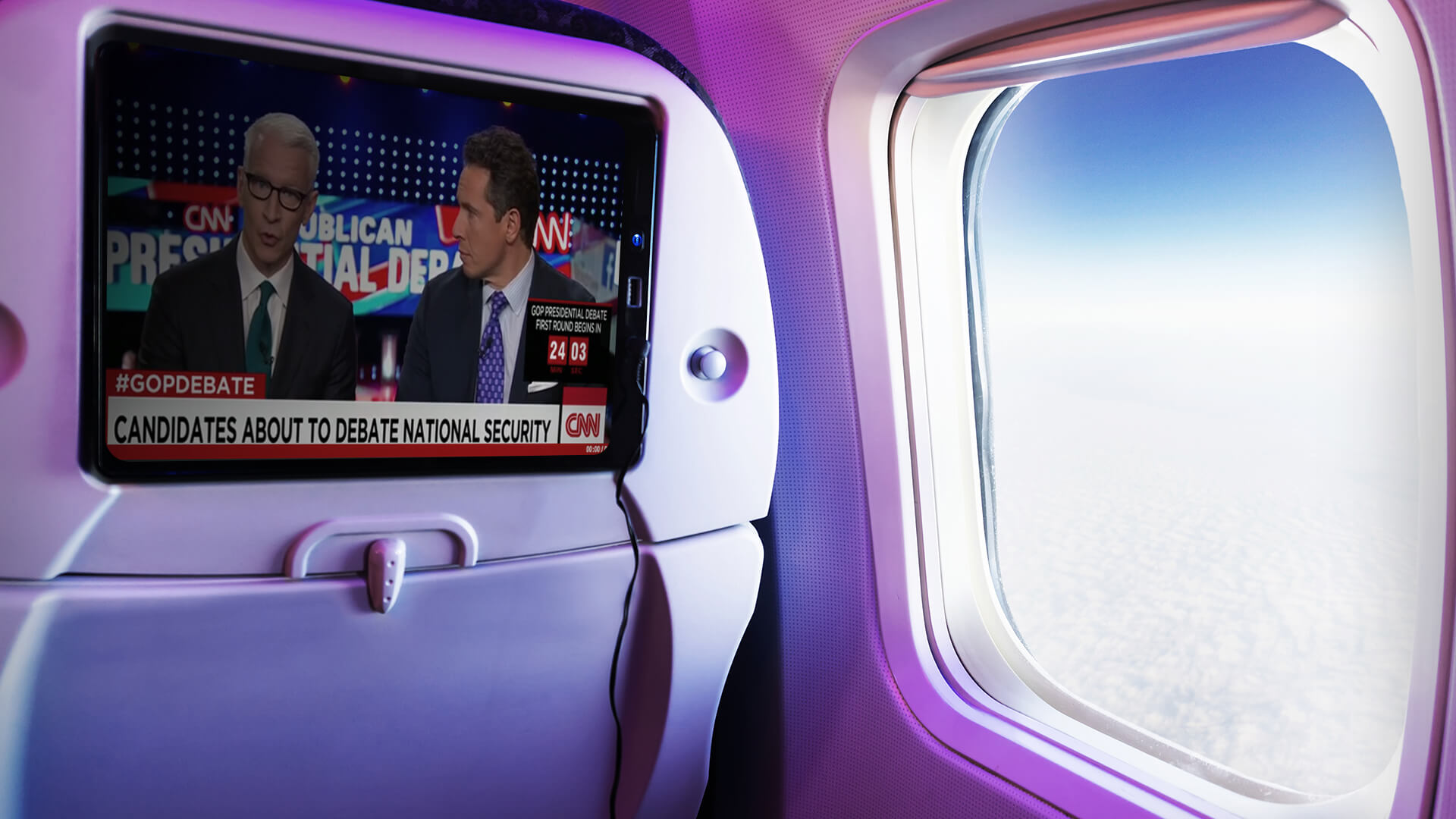 We know by now that younger generations are abandoning traditional TV, opening their wallets instead to over-the-top (OTT) streaming services without a second thought. But a recent report from Nielsen reveals that millennials do indeed partake in their share of entertainment-based linear TV – it just happens to occur outside their living rooms.

And what’s more: linear TV ads served out-of-home are shown to narrow the gap between passive observation and actionable engagement.

Women and millennials driving OOH TV. The average age for OOH entertainment viewership is 37 years old, with females accounting for 55% of the audience, according to the report. Moreover, viewers reported an average income of $55,000, and at least 42% said they have a college or graduate degree.

In addition to viewers leaning toward the millennial demographic, more than one-third of respondents across adults surveyed reported watching OOH entertainment programming several times a week.

If you air it, they will come. From gyms and bars to hotel rooms and friends’ homes, millennial viewers are getting their fix of traditional programming and live broadcasts wherever they can. 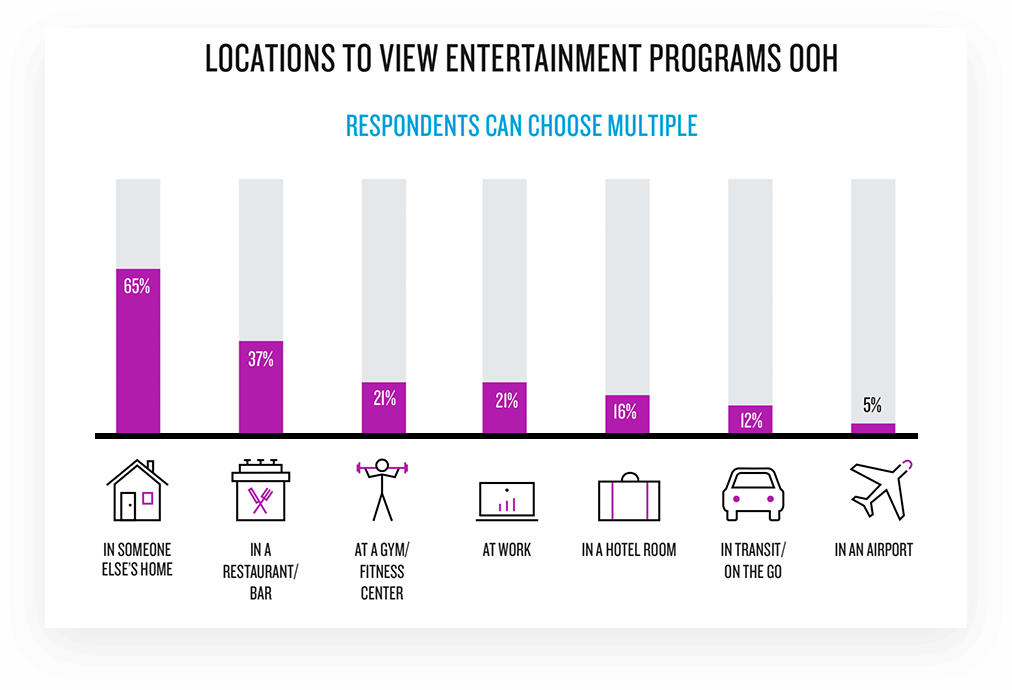 An overwhelming majority of viewers surveyed said they prefer the comfort of their friends’ houses, where viewing parties gather for the launch of season premieres, annual award shows, sports games, and even political broadcasts. For sports games in particular, audiences are drawn to – surprise! – bars and restaurants to deliver live broadcasts in a spirited social atmosphere.

But even outside what can be considered traditional gathering places for viewing linear TV outside the home, audiences are also consuming TV in gyms, airports, and even in the workplace – an indication that entertainment programming provides advertisers with a unique avenue to reach millennials on-the-go.

A driving force for advertisers. Out-of-home viewing environments create a perfect recipe for social interaction, where even amplified engagement with linear TV advertising becomes a byproduct.

Nearly 60% of survey respondents who watched OOH TV in the last week said they talked about the brands they saw in TV ads viewed outside the home, and around half went so far as to research the brands online. More than 40% took direct action and purchased the product either online or in-store. 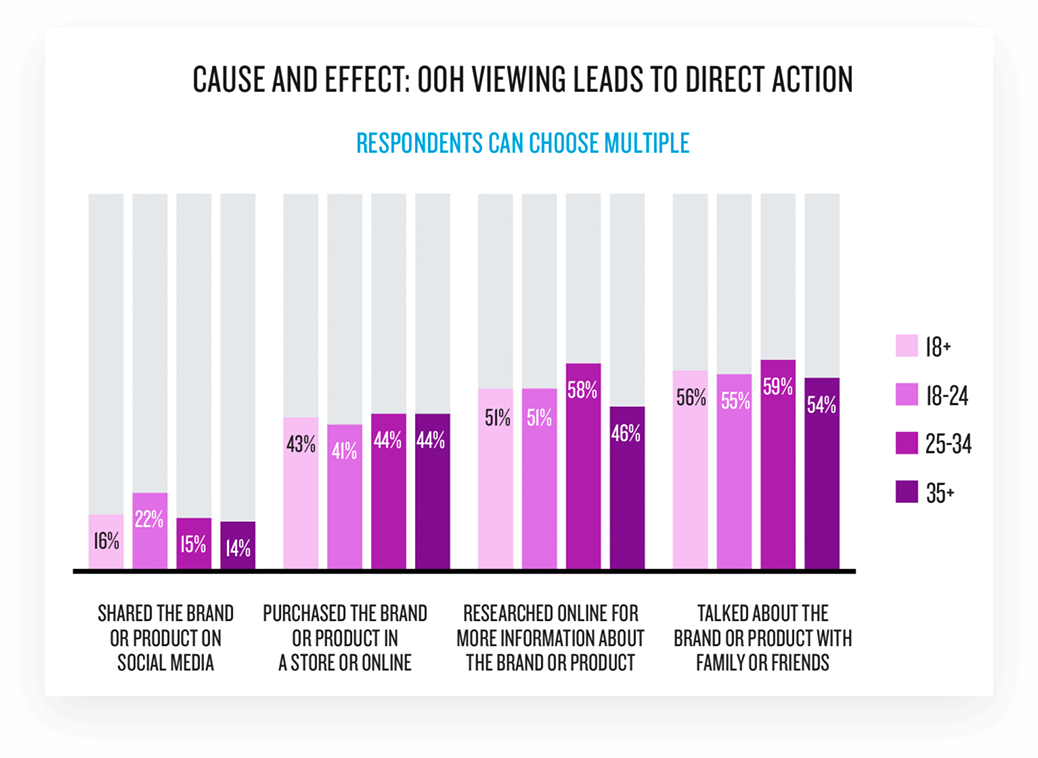 Why we should care. As a digital generation, millennials are much less likely to invest in linear programming in their own homes, but are shown to supplement with out-of-home viewing – particularly in the context of a social environment. The community interaction that occurs outside the home drives deeper engagement with brands, as audiences raise advertisements as a topic of dialogue with their co-viewers.

In our fragmented ecosystem of media consumption, marketers and advertisers are driven to identify the devices and habits that shape buying behavior. And in an age where younger generations are thought to have disconnected from linear TV altogether, OOH TV viewing highlights a unique channel for advertisers to reach customers and move them down the purchase funnel.